Last year, when we put up the billboards “To all of our atheist friends: Thank God You’re Wrong,” we knew it would create controversy. As expected we had criticism from both Christians and non-Christians—but we also had overwhelming support. This billboard effort was a great success for getting the attention of the media and those who oppose Christianity. These billboards weren’t meant to be “teaching” billboards (you can use only a few words in the space given), but boards that would catch the eye of countless people and let them know that we as Christians are not ashamed of our faith, and that we intend on making a public stand in our culture for the Lord. 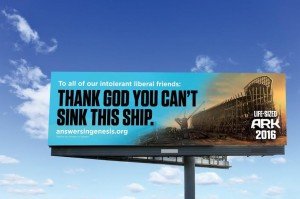 This week, we released new billboards in response to the massive propaganda campaign from the secularists who have been intent on spreading as much false information as they can against our Ark Encounter project—all with a view to try to stop or undermine the project in some way.  The new billboards state, “To all our intolerant liberal friends: Thank God You Can’t Sink This Ship.” Just like our previous billboard campaigns, this has received overwhelming support—but also criticism (as expected) from Christians and non-Christians. Within hours of our new Ark billboards going up, the secular and Christian media were buzzing about them.

The Purpose of the Billboards

This new billboard campaign is meant to get the attention of (1) the media (and it has—there were several news items about our billboards on Tuesday), (2) the secularists (and the boards definitely caught their eye), and (3) Christians. We want to inform them with the correct information about the Ark project and undo the propaganda campaign of the secularists (who have had the ear of much of the media as they spread their misinformation).

Indeed, we believe it is important for Christians to take a bold stand in this culture. Since these were not intended to be teaching billboards, they had another purpose. The boards proclaim nothing more than what I say often in my talks—that those claiming tolerance in our culture are some of the most intolerant people around! And their intolerance is really directed mainly at Christianity.

Sadly, we live in a time when many in the church have been conditioned to believe that Christians should be passive and not say anything negative. They seem to succumb to political correctness and don’t want to rock the boat.

This reminds me of what I have seen a lot of in the church called “anti-marketing.” While the secular world is very aggressive in getting out their message of evolutionary secularism to generations of kids, many churches don’t like us offering books and DVDs when we speak. It seems there is this idea in many churches that marketing is a sin! It seems to me that many Christians would rather see the world market their anti-God resources and push secular propaganda on our children, but Christians will restrict how we can get correct information to them. This greatly burdens me.

Also, the secularists are very active in opposing anything Christian in the culture. And by and large, many Christians have basically rolled over. Think of it. Nativity scenes, crosses, Christmas carols, and Ten Commandment displays are being  removed from the culture.  Previously, we have also seen prayer, the Bible, and creation by and large removed from public schools. Also, the “gay marriage” issue permeates the nation. Yet it’s legal to kill millions of children in the mother’s wombs each year!

The secularists, because of their victories in the culture, have become more daring, going after anything that has some sort of Christian message.

Attacks on the Ark Project

Recently, secularists have been attacking the Ark project. They tried to do great harm (more than most people realize) to the bond offering earlier this year, which is part of the funding for the Ark Encounter. Groups like the Americans United for Separation of Church and State have been sending our private information (gained through unscrupulous means) to the media and putting pressure on the state of Kentucky to harm the Ark project. And they also disseminate false information and make bogus accusations about supposed legal infractions—all a part of an aggressive propaganda campaign. Of course, they know the old adage: if you throw enough mud at the wall, some of it will stick.

Even some well-meaning Christians have asked me why we are using tax dollars to build the Ark—when no such thing is happening! They have swallowed the lies of the secularists.

Recently a group of atheists wrote to the IRS to claim AiG was acting illegally and needed to be investigated. They either know what they are claiming is not true, or they just never checked out the true situation in regard to how AiG has been set up.

Being Bold in the Culture

It’s sad to me that we don’t see many (there are only a few) prominent Christian leaders making a public stand against what is going on with these atheists and other secularists. Even if  a Christian leader manages to speak up but holds to a biblical worldview, most of the secular media will not want to interview that person, or if the media does so, the leader will most likely be mocked.

At AiG we have never been hesitant about being bold in the culture. I get inspired by people like Elijah and what he did with the prophets of Baal on Mt. Carmel. Actually, I’m sure he received criticism for the way he treated those pagan prophets. I’m sure some of those criticizing our billboards would have also been critical of Elijah! But he was prepared to take a stand!

We Will Fight for Him!

So without apology, we have taken a stand in the culture. We want to let those who are so actively campaigning against anything Christian know that as soldiers of the King, we will fight for Him!

I challenge more people (including Christian leaders) to stand with us as we boldly and unashamedly call the enemies of God to account.

I pray God’s people will take these words to heart: “And Elijah came to all the people, and said, ‘How long will you falter between two opinions? If the Lord is God, follow Him; but if Baal, follow him’” (1 Kings 18:21).

Let’s show the world in a public, bold, and unashamed way that we follow our King—the King of Creation!

Previous Article Why We Have Billboards in Kentucky and Times Square Next Article Bacteria Resistance In India a Result of Evolution?