There are modern-day Ark legends being spread far and wide by secularists who are seeking to hinder the Ark Encounter project of Answers in Genesis, a full-size Noah’s Ark to open in Northern Kentucky in 2016. This Noah’s Ark theme park will present the historicity of the biblical account of the massive ship of Noah’s time, which is rejected today by Bible scoffers in various anti-Christian groups. Many of these secular groups, as they relegate Noah’s Ark to a myth, are passing around their own Ark myths. These agitators outside the state are trying to affect the project by spreading misinformation and putting pressure on the state of Kentucky to undermine the project.

To counter this intense misinformation campaign by secularists and many in the media, a billboard campaign (and other initiatives) has been launched to get people to discover the truth about the Ark project, and to direct people to our Answers in Genesis website. This new campaign follows after last year’s hugely successful “Thank God You’re Wrong” billboard campaign that directed thousands of people to AnswersInGenesis.org and a special banner article and video. This new campaign is expected to have a similar effect and will help to counter the myths floating around about the Bible-upholding Ark Encounter.

Here is an image of these eye-catching new billboards: 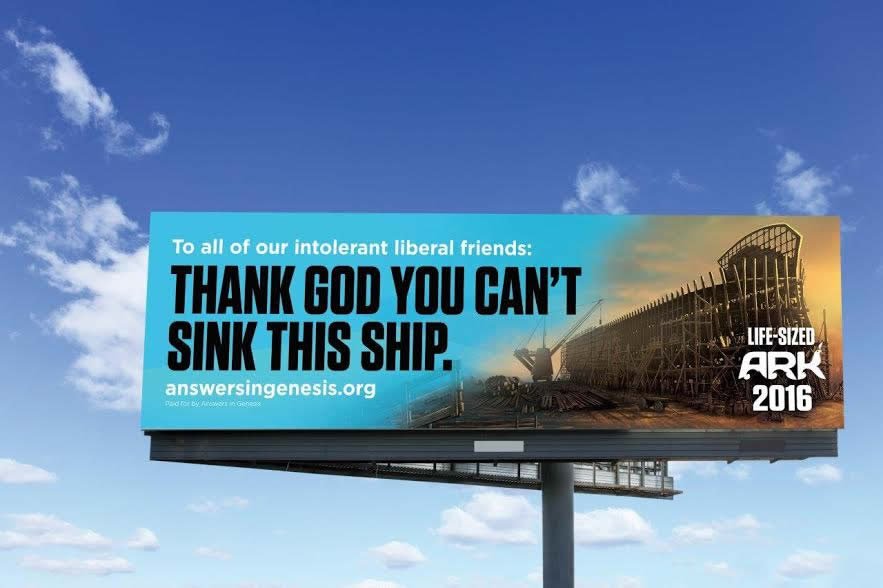 The billboard campaign began over the weekend with a board posted in Lexington, Kentucky and will continue into January 2015. Since some of the misinformation has been circulated by major newspapers, some of the 16 boards will be seen near Kentucky’s three major newspapers: the Courier-Journal (Louisville), the Herald-Leader (Lexington) with a board near the paper’s offices, and the State Journal (in the capital city of Frankfort). An additional three boards can be seen around the Northern Kentucky/Cincinnati area, where AiG’s Creation Museum is located. The final billboard is a 15-second digital board that will go live Wednesday morning in New York City’s Times Square and will run through December 29. This digital video board will give 672 spots per day during the busy holiday season at this bustling square, when NYC receives its highest volume of foot and vehicle traffic. In all, this outdoor effort is expected to deliver more than 20 million impressions.

Several of these boards are strategically positioned near newspaper offices because much of the media has been heavily involved in spreading misinformation about Ark Encounter. Instead of checking the “facts” secularists have invented, and then comparing them to the many articles that debunk these myths published on ArkEncounter.com or AnswersInGenesis.org, many in the media have simply spread blatant lies and misinformation about Ark Encounter. Articles debunking these untruths have been published for years on both websites, and yet even recent media articles continue to spread these same tired untruths. These billboards will encourage the media and others to visit the Answers in Genesis website. 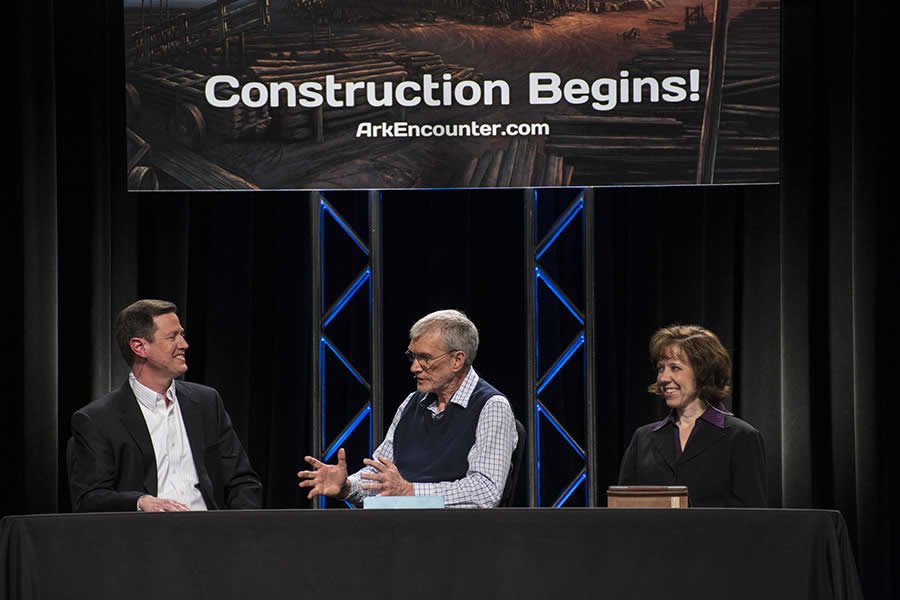 Earlier this year, AiG held a live webcast to brief viewers on the progress of the Ark Encounter and to dispel some of the modern-day Ark legends. (L–R: VP Joe Boone, President Ken Ham, and researcher Dr. Georgia Purdom.) Go to the 12:10 point of this video where some of the Ark myths are dispelled by Dr. Purdom.

Here are examples of modern-day Ark legends being spread by secularists who seek to hinder the Ark Encounter project.

The most common myth is that the Ark Encounter is being built using tax dollars. This is utterly untrue. No unwilling taxpayers will see their tax dollars used to build the Ark. The money involved from the Kentucky Tourism tax incentive only concerns sales tax that will be collected from people who voluntarily visit the completed Ark when it is fully operational. With excellent attendance and the generation of tourism dollars for Kentucky, Ark Encounter might have the opportunity to have a portion of the sales tax it collects refunded (to a maximum-approved amount over 10 years through the state’s legislation). This is the same incentive that is given to a variety of tourist attractions that have been built in Kentucky.

Now, the truth about taxes and the Ark Encounter is that, in addition to tax revenue from the Ark Encounter that the state keeps, Kentucky and its citizens will also benefit from the state income tax collected from new positions of employment, plus from the sales tax collected at businesses that are created in the region because of the Ark—money which will go toward funding state programs that can benefit citizens. Ark Encounter will be a definite boost to Kentucky’s economy—and that’s the whole point of the state tourism incentive.

Many secularists claim that the possible refund of state sales tax collected at the opened Ark Encounter is a violation of the so-called “separation of church and state.” A prominent Kentucky politician has also made this claim. This myth has already been debunked by an attorney with the American Civil Liberties Union of Kentucky, who told USA Today in 2010 that the state’s Tourism Development Act should be non-discriminatory toward the Ark Encounter. This ACLU lawyer told the national newspaper that “courts have found that giving such tax exemptions on a nondiscriminatory basis does not violate the establishment clause [of the First Amendment], even when the tax exemption goes to a religious purpose.”1 Actually, it would be discriminatory for the state not to give Ark Encounter the same tax incentive that it offers every other eligible tourist attraction. For Kentucky not to give the incentive would be clear discrimination against religion, which is something that the state constitution does not allow.

A third popular myth is that it is illegal for the Ark Encounter to hire only those people who can sign its statement of faith. While the Ark Encounter (which is currently under construction) has not yet determined what its hiring policies will be, or whether different levels of employees may have different requirements, we point out the following:

Despite these lies and the vicious opposition of secularists, construction has begun (see the photo below)! Even though the denial of the tax rebate would amount to a huge financial loss for our project, the Ark Encounter is moving forward, by God’s grace and provision. The full-size Noah’s Ark is anticipated to open in 2016. Keep up to date on the progress at AnswersInGenesis.org or at ArkEncounter.com. 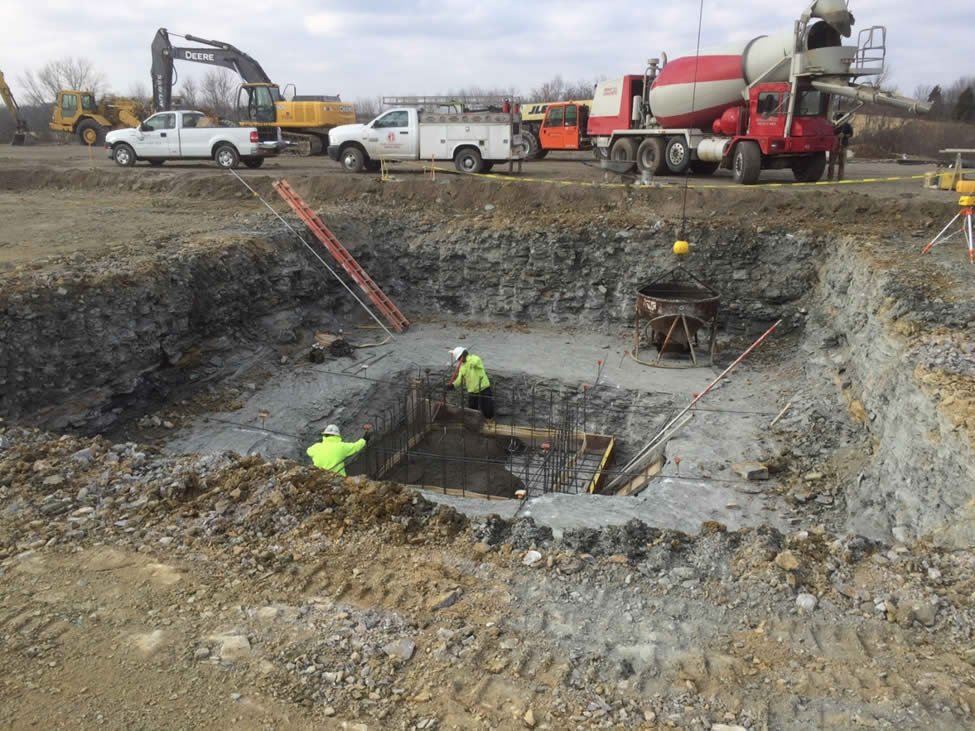 A new phase of the construction began as the first of many loads of concrete was poured. In this picture, workers are seen preparing the sump floor for a massive underground water storage tank beneath the future site of the Ark.