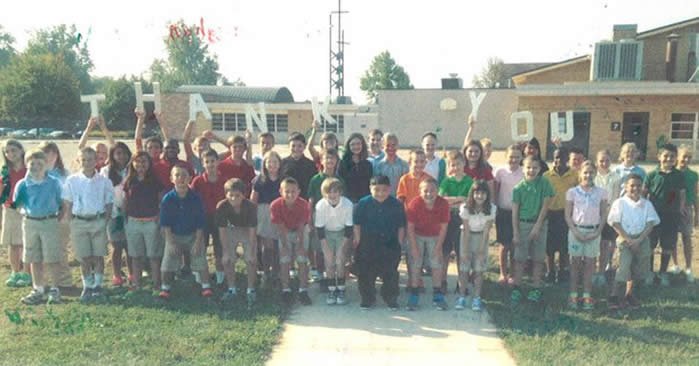 Look at those smiling students! I recently received a thank you letter and photo from the fifth-graders at Concordia Lutheran School in Fort Wayne, Indiana. They are studying the Seven C’s of History, and I made them a video (which you can watch below) to encourage them to stand firmly on the Word of God and its account of history. I am always thrilled when I hear of schools like this one that are training their students to think biblically and to trust God’s Word from the beginning. Sadly, as documented in my coauthored book Already Gone with Brit Beemer, two-thirds of our young people are walking away from the church, and often times it's because they have doubts and questions about the Bible that were never answered. I praise the Lord that the teachers are working to equip these students to answer the skeptical questions of this age.

Here is the video I did for Concordia Lutheran.

The Seven C’s of History

The Seven C’s of History are an easy way to remember the history of the universe, beginning in Genesis. The first C, Creation, emphasizes that God created a perfect world in six literal days. This creation didn’t evolve slowly over millions and millions of years—animals and plants were created to reproduce according to their kind. Adam and Eve, the first two people, were specially created by God in His image.

But the next C, Corruption, changed God’s perfect world. Adam and Eve chose to sin and, because of their choice, sin and death became part of the world. This explains why death and suffering are part of our world today.

The next C, Catastrophe, radically shaped the earth. Because of man’s wickedness God sent a global Flood that destroyed the earth and those in it, except for Noah and his family aboard the Ark. The account of the Flood in the Bible explains why we find billions of dead things buried in rock layers laid down by water all over the earth.

Not long after the Flood came the fourth C, Confusion. Mankind rebelled against God’s command to fill the earth and decided to build a tower to the heavens. In response, God confused their languages, forcing them to spread around the earth. This explains why there are different languages and people groups. But we’re all one race because we’re all related to Adam and Eve.

The last three C’s—Christ, Cross, Consummation—tell us that Christ came and lived a sinless life. He willingly went to the Cross and took our penalty, death, upon Himself. But He didn’t stay dead! He rose from the dead, and someday He’s going to create a new heavens and a new earth.

To learn more about the 7 C’s, I encourage you to check out this DVD or, if you have children, stop by our Kids Answers site and take a look at the 7 C’s of History for kids page.