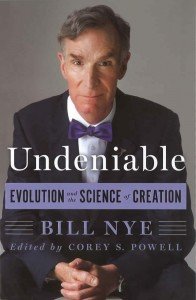 Bill Nye’s new book Undeniable: Evolution and the Science of Creation combines Nye’s false claim that biblical young-earth creation is dangerously unscientific with his equally false claim that the foundation of all science is evolution. He asserts that all scientific curiosity and progress depends on the acceptance of molecules-to-man evolution. Although scientific models grounded in biblical history have been the basis for countless solid scientific predictions, Bill Nye goes so far as to say, “How did we let an ideological resistance to inquiry become such a prominent part of our society?” (p. 17). He fails to see that Bible-believers are as interested in scientific inquiry as anyone else, but those who take God at His Word resist those who categorically declare that the Creator didn’t tell us the truth in His Word.

From cover to cover Bill Nye exalts and adores his own false god: evolution. To gather in followers to his ardent evolutionism, he continues preaching his crusade for the hearts and minds of children. He declares that children who don’t believe in evolution “will become society's burdens rather than its producers” (p. 10) and exhorts the government and everyone else to cast the evolutionary net for “the children of the creationists ‘preachers’ flocks” (p. 18).

Now, Undeniable aims to show that molecules-to-man evolution is undeniably true. Throughout his book, Bill Nye emphasizes his belief that observable evidence is proof that molecules-to-man evolution explains the origin of life and all forms of life from a common ancestor. And yet all the examples he provides are observable variations in created kinds of organisms and observable common designs consistent with the fact that our Creator God is the Designer of all living things.

Once again, as I have publicly said on the AiG website and in front of the live debate audience, I have this challenge for Bill Nye:

Can you name one piece of technology that could only have been developed starting with a belief in molecules-to-man evolution?

Bill Nye has never answered this question and neither has any evolutionist, and that is because they can’t.

While Bill Nye claims the evidence for molecules-to-man evolution is undeniably true and dismisses all evidence to the contrary, an objective reader will see that the real battle is not between science and biblical young-earth creation, but between a humanistic worldview and a biblical worldview. In other words, the real issue is between biblical Christianity and all worldviews that reject God’s Word and exalt man’s fallible ideas above God’s Word.

Bill Nye claims, “I emphasize that [during the debate] I did not disparage anyone’s religion. I did not mention anything about The Bible. I had no reference to Jesus from the city of Nazareth” (p. 9). Those who watched the debate can see right away how blatantly misleading this statement is, though Bill often couched his claims as critical of  “Ken Ham’s interpretation” of  “the Bible in English.” Bill Nye continues to disparage the Bible in his book. Perhaps he thinks that “the religion” of those who take the Creator God at His Word is irrelevant because some professing Christians compromise the Bible to accept evolution.

And while Bill Nye did not specifically attack Jesus Christ by name, his attack on the foundational book of the Bible with its explanation of the origin of sin, suffering, and death is an attack on Jesus Christ because it destroys the very reason Jesus came to Earth to die for our sin so that we could have fellowship with Him again. That is why we at Answers in Genesis make such a big deal of accepting the authority of the Bible from the very first verse. In the Bible’s history of man’s origins, we learn about the holiness of God, the goodness of His original creation, the rebellion of man, the origin of death, the mercy of God, and the reason we need a Savior. Besides, it is clear that Jesus Christ, the Son of God, believed the history in Genesis is true.

Bill Nye goes on to say, “But I was, and remain, concerned about the extraordinary claim that Earth is extraordinarily young, which is an assault not just on evolution but on the whole public understanding of science.” Here again I want to point out that the public would understand science a lot better if evolutionary scientists would stop treating their humanistic, God-denying, worldview-based interpretations of our origins—which no scientist has ever observed or tested—as if they were as reliable as the conclusions drawn from the testable, repeatable processes of observational science. (You can read more about the difference in “Deceitful or Distinguishable Terms—Historical and Observational Science.”)

Churches and Christians that compromise on the age of the earth question should see that old-earth compromises are dangerous because they deny the truth of God’s Word. The old-earth compromises also lead logically to Bill Nye’s utterly godless and God-mocking position, for with faith in the sufficiency of evolution to supply all answers, Nye writes, “Perhaps there is intelligence in charge of the universe, but Darwin’s theory shows no sign of it, and has no need of it” (p. 46). 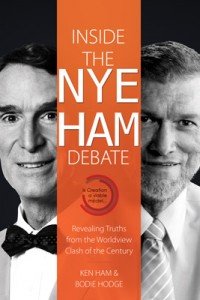 Be sure to read Dr. Elizabeth Mitchell’s upcoming book review of Undeniable. Then you will be ready to discuss the points your Undeniable-reading friends may raise. Remember, our Lord commands us in Scripture to be always ready with answers for the hope that is in us (1 Peter 3:15). We have hope in the salvation available through Jesus Christ and trust that our Savior and Lord has told us the truth in His Word from the very first verse.

I also strongly encourage you to read our new book called Inside the Nye Ham Debate, which provides detailed answers to the many complex questions for which there was not enough time to answer during the debate. I also included many personal details about various aspects of the debate in this new publication.