The Uniqueness of Man

During my debate with Bill Nye “the Science Guy” earlier this year, I highlighted several scientists who are also creationists. One of these scientists was Dr. Stuart Burgess, professor of engineering design at the University of Bristol in the UK. Dr. Burgess has published over 130 scientific papers and has also designed major parts of spacecraft. Dr. Burgess was one of the speakers at our Design(er) conference held at the Creation Museum this past April, and his presentation is now available on DVD. 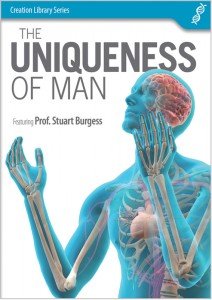 In The Uniqueness of Man DVD, Dr. Burgess emphasizes the beauty of God’s design in the human body and clearly demonstrates that humans have several aspects of design that are 100 percent different from the apes—and could not possibly have evolved from a common ancestor with them. He explains that the process of evolution supposedly works by selecting features that better enable the survival of the organism. But if evolution is true, why is it that humans are seemingly designed for so much more than just survival? Indeed, humans seem “over-designed” because we were created to do more than just survive. In this powerful presentation, Dr. Burgess gives examples of this over-design and demonstrates that evolution simply cannot account for the unique features we find in humans.

Here is a short clip from the DVD:

In our day and age, people are taught that man is just another animal and that there is nothing special about us. But God’s Word paints a very different picture. According to God’s Word we are made in His image (Genesis 1:27), fashioned by His hand (Psalm 139:13), and just a little lower than the angels (Psalm 8:5). What you think about the origin of mankind determines how you value human life.

Equip yourself to defend Scripture’s view of mankind with this unique and powerful DVD presentation available for order here.

Also be sure to check out these articles on man’s special creation and uniqueness: “Uniqueness of Man” and “Did Humans Really Evolve from Apelike Creatures?”

Previous Article “Why Does Creationism Matter So Much?” Next Article Meet Me in Maryland