I wrote yesterday about the Duggar family, stars of TLC’s 19 Kids and Counting, and their visit to the Creation Museum. During their tour of the museum and gardens one of the older girls, Jessa, posted some pictures from the Creation Museum on Instagram that have quickly attracted a lot of attention, including being featured in a US Magazine article.

Here is a photo Jessa posted of an exhibit inside the museum: 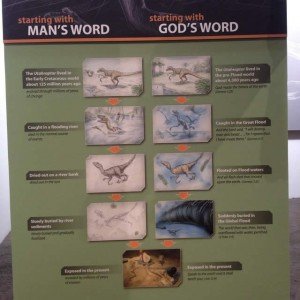 This caption, which is one of my most popular sayings and was put to song by our dinosaur sculptor, artist, and musician Buddy Davis, concisely highlights the real issue in the origins debate: your starting point. Like Jessa said, a creationist and an evolutionist will both look at the same fossils in the same rock layers but will come to completely different conclusions depending on their starting point. If you start with man’s ideas, you will see in the fossil record millions of years of death and evolution. If you start with God’s infallible Word, you will see in the fossil record evidence of a worldwide, watery catastrophe that quickly engulfed and buried billions of organisms—the global Flood of Noah’s day! The evidence is the same but the conclusions are different because our starting points are different.

Jessa also shared a photo of her younger sister, Jinger, in our gardens. This photo has over 33,000 likes! 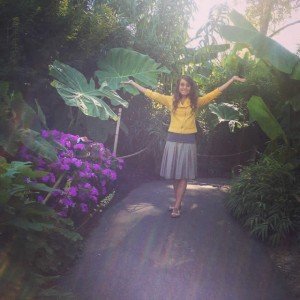 We praise God for this family that is willing to stand firmly on the authority of the Word of God and boldly and publicly proclaim its truth to our lost and dying culture.

Previous Article A Duggar Surprise! Next Article Bill Nye Bringing His Religion of Humanism to Australia