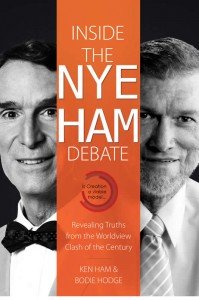 Well, it’s been over seven months since my historic debate with Bill Nye “the Science Guy.” Our conservative estimate is that upwards of 15 million people have now seen this widely recognized debate. And now we have an exciting announcement to make. Popular AiG speaker and author Bodie Hodge (my son-in-law) and I have written what we believe is a unique and powerful book about the debate—not just dealing with the content of the debaters, but detailing behind the scenes and personal information. We believe this publication (estimated to be well over 300 pages), will be a phenomenal teaching tool, and will be a fascinating read for what has been called by some as “the debate of the century.”

The book is not only written from Bodie’s perspective as my son-in-law, but also from someone who understands the content in regard to both sides of the debate. I also have given Bodie a lot of information behind the debate, and a considerable amount of personal information that gives this book a unique twist.

Inside the Bill Nye Ken Ham Debate thoroughly dissects the entire debate from the opening statements to the question-answer period at the end. This book expounds on many of the statements and arguments that I made during the debate, and respectfully addresses Bill Nye’s arguments against the biblical position and for evolution and naturalism. As an added feature, it also contains the entire debate transcript!

Many people have lingering questions from the debate and are curious about how, if given more time than I had during the debate, I would have countered Mr. Nye’s claims. This new resource does just that. I encourage everyone who viewed the debate—believer or skeptic alike—to get a hold of this resource. Believers will be equipped to stand firmly on the authority of God’s Word and respectfully dialogue with others. Skeptics will be challenged with the truth of God’s Word, the bankruptcy of evolution and naturalism, and the abundance of scientific evidence for the biblical model of origins.

I also answer many questions people have asked me, such as, “Who won the debate?” And I give my personal thoughts on Bill Nye and his beliefs. And of course, as I did in the debate, we share why I even involve myself in such debates: to be a soldier for the King and obey the Great Commission.

This exciting new resource is available as a preorder.

Previous Article Humanists Want “Under God” Struck from Pledge of Allegiance Next Article Does the Creation/Evolution Debate Hurt the Gospel?