In Memoriam on Memorial Day

Today, Memorial Day here in America, I am thinking of a man who served in the U.S. Army and also served His Lord. Art Hunsicker was a volunteer at AiG and the Creation Museum for about 15 years, and he served during World War II. Our friend Art died late last week.

Art fought in the famous Battle of the Bulge in 1944–45—a very cold winter in the forests of Belgium, where frostbite was common for soldiers. Art didn’t talk much about the experiences of war, including some of the suffering the soldiers endured—and also as he saw so much death all around him. A reluctance to speak about the war seems to characterize many of the men who are described as part of “The Greatest Generation.”  Now, if you asked Art about the war, he would talk about it. And sometimes it would include recalling a humorous incident, even in the midst of some horrible fighting. Art told some of us that he saw the famous General George Patton, who, all dressed up in his finest uniform, chewed out Art’s commander for wearing dirty boots—but who had just been in a terribly muddy battlefield!

Here is a picture of Art taken at AiG over a year ago. He had dropped by one of the staff member’s office and was asked to point out Belgium on a world map. It’s where he and his comrades played a big part in defeating Nazi Germany and rescuing Europe, but where his friends died. Especially on a day like today, Americans remember their sacrifice. 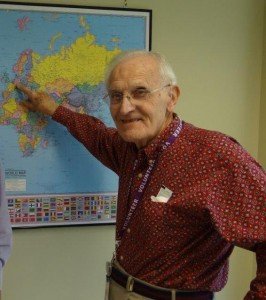 Services for Art will be held tomorrow (Tuesday) at his church, Bible Chapel of Delhi Hills, near Cincinnati. Pray for his wife Betty, three children, and other family plus his friends. AiG ministry friend Pastor Kevin Landis will lead the service and will present the gospel as he honors his long-time friend, Art.