I recently blogged about the upcoming movie A Matter of Faith. The film’s trailer has been released, and Roger Patterson of our staff—the author of the Evolution Exposed books and a lead writer of our Answers Bible Curriculum—has been a content consultant on this excellent new film. 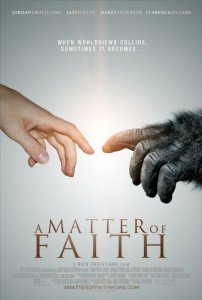 Opening in theaters across America on September 26, A Matter of Faith will be an excellent witnessing tool and will strengthen the faith of fellow believers. Here’s what the creators of A Matter of Faith had to say about why they wanted to make the film:

We wanted to make a film that brought the issue of creation vs. evolution to the forefront. A film that would be fair to both sides and allow the viewer to make a choice. What bothers me is that it seems that the idea of evolution is taught in our schools and universities across this great land of ours as a matter of fact. But, no one can prove evolution since no one was present in the beginning to witness it just as no person was there at the beginning to witness creation. Therefore, both of these teachings become a matter of faith, not fact. The question is which is more plausible with better evidence to put your faith in? Faith in Darwin’s theories or the Bible, which is the word of God. Which offers more hope? Evolution or creation? One of the purposes of the film is to create some intelligent conversation about this issue.

Harry Anderson, originally offered another role in the film, wanted to play Professor Kaman, who is the atheistic biology teacher in the film. “I really liked the script,” Anderson told the producers. “It was very fair.”

Jay Picket, who plays the role of the caring father Stephen Whitaker in the film, could relate since he has his own daughter in college right now. “Playing the role of Steven Whittaker was something I could easily relate to,” Pickett says. “As a father with a daughter in college, you're always concerned about their well-being and what they are learning. Giving them the proper guidance isn't always easy and can make you unpopular. But you have to do what you feel is right in your heart."

“If you think about it, every movie is religious,” Rich Christiano adds, “since every film has a moral fiber running through it. All films teach standards and principles by which people live by. We choose to teach principles expounded in the Scripture and uplift the author of those standards which is God and Christ.” Isn’t it encouraging to see Christians committed to the authority of God’s Word making family-friendly films that will turn hearts and minds to the gospel? I’ll continue to share more as news of the movie comes out, but right now we need more screen sponsors!

I urge you to visit the special movie information page on our website to view the trailer and to find out more about what you can do to get this movie to your area.