The Washington Post, along with the New York Times, is considered the most influential newspaper in the USA. But you can’t necessarily believe what you read there, including a recent post by a Post blogger. The blogger claimed a few things about AiG and other creationist groups in light of last week’s news about the big bang and the creationists’ reaction to it. He wrote, “They have been so aggressive in trying to pass legislation to mandate the teach [sic] of creationism in public schools, in supporting school vouchers so that schools are not free to teach evolution at all, in demanding equal time on Neil deGrasse Tyson’s new show on the cosmos and in building a theme park that speaks to their beliefs.”

Rather than AiG rebut that remarkably wrong sentence ourselves, I will let the words of someone who posted a comment at the end of the Post blog speak for us:

There are three major errors in just one sentence!  Incredible. Claim #1: Answers in Genesis has “been so aggressive in trying to pass legislation to mandate the teaching of creationism in public schools.” No, AiG has NEVER advocated that. On the contrary, time and time again AiG has said that it does NOT favor mandating creation or intelligent design in public schools. AiG actually argues the opposite: it declares that it would be counterproductive to force science instructors to teach creation because most of them would teach it poorly.  Strike one. Claim #2: Answers in Genesis supports “school vouchers so that schools are not free to teach evolution at all.” Not true. Document that. The converse is true: AiG says that students should learn about evolution because it is a major belief system in society, but to teach it faults and all. Strike two. Claim #3: AiG demands “equal time on Neil deGrasse Tyson’s new show on the cosmos.”  Not true.  Document that. You can’t find a quote from anyone at AiG who has demanded equal time from the show’s producers. Strike three. All in one sentence. Whatever happened with Post writers doing their research?

Here is the blog. 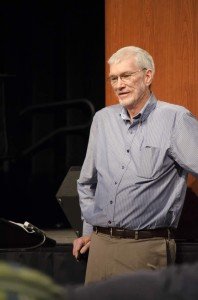 At yesterday’s staff meeting, I shared why the new Noah film should not be promoted by Christians.

AiG is committed to presenting you with commentary on news of the day that relates to the Bible. Last night several of our researchers and I watched the new Noah film, and tonight (Friday) at 8 PM eastern time, we will share our views about this unbiblical film—including how it treats the godly man Noah (Hebrews 11:7), how evolution is inserted into the film (by the character of Noah himself), and other ways the film deviates from Scripture. Yes, any movie based on a real event will have to use some creative license, including depicting a biblical account, but this movie steps way over the line. It’s a terrible film. We caution Christians about supporting it.

Through a staff member who had seen a cut of the film and others who have seen the final film, we were already aware of the film’s unbiblical content—and I have blogged about it (you can find my blog posts on our new Noah movie page). Also, keep watch for a review of Noah going up today on answersingenesis.org.

Please join me tonight, March 28, at 8 PM eastern time, on www.CreationDebate.org (a new section of our website) for a live web stream that gives our review of a film that is being predicted to be a Hollywood “blockbuster.”

Previous Article Join Me for a Live-Stream Movie Review of Noah on Friday! Next Article The Noah Movie Is Disgusting and Evil—Paganism!