Here is the news release, with an embedded video, that was distributed to America’s media yesterday about some exciting new Bible-upholding exhibits that will be unveiled this weekend at the Creation Museum. (This version of the news release is slightly adapted for the web.)

PETERSBURG, KY., May 23, 2013—Three striking new exhibits are opening this Memorial Day weekend at the Creation Museum as part of the popular attraction’s sixth anniversary and expansion.

The following 1:20 video demonstrates that museum officials have determined not to allow their museum to become stagnant. They are encouraging their 1.8 million visitors to make a return visit to see the following world-class exhibits:

In addition to a major billboard campaign that has just launched to announce the new dragon exhibit, much more is happening at the Creation Museum this summer. 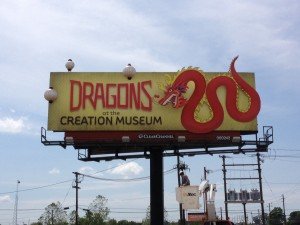 The Creation Museum in northern Kentucky (near the Cincinnati Airport) is an outreach of the apologetics organization of Answers in Genesis. The AnswersInGenesis.org website has been voted “Best Ministry Website” two times, as determined by the National Religious Broadcasters (the site attracts over 1 million web visitors a month). Its Answers magazine has twice picked up the highest award for magazine excellence by the Evangelical Press Association. AiG will soon be building a full-size Noah’s Ark; see www.ArkEncounter.com. The museum site is www.CreationMuseum.org. All three exhibits are offered at no extra charge for ticket holders.

To read a longer piece about what’s new at the Creation Museum starting this Memorial Day weekend, go to our main web article today. You’ll also see photos of these one-of-a-kind exhibits that glorify the Lord and His Word the Bible.

Previous Article The Science Quiz the Atheists Hate—Let’s Take it Ourselves! Next Article Yes, There Will Be . . . Another Bible Bee