Creationism Is Absolutely Appropriate for Children!

As many of you know, Bill Nye the “Science Guy” (of PBS TV) recently posted a video on YouTube entitled “Creationism is not appropriate for children.” This video received over 4.7 million views. AiG responded with YouTube videos, blog posts, and an article. But really, one of the best ways to counter Bill Nye is to reach as many children as we can personally, with the truth of God’s Word—and that’s what we continue to do.

As part of our AiG conferences held around the country, we run special school K-12 assemblies. Over a typical year, we reach thousands upon thousands of children and teens.

Yesterday, in Lawrenceville, Georgia, we were thrilled to see hundreds of kids (1,500) pouring into North Metro Baptist church for our school assemblies. I just love teaching the children the truth about dinosaurs—that they were made on the sixth day of creation alongside Adam and Eve. I love to teach them how to think correctly about origins based on Job 38:4. I.e., when someone says “millions of years,” these children will now know to ask politely, “Were you there?” Oh, the secularists hate me teaching children the correct way of thinking. They go ballistic, knowing kids are being taught to think in the right way concerning the truth about origins.

I made sure all these young people understand that God created the universe in six literal days about six thousand years ago and that most of the fossils came from the Flood about 4,300 years ago. Yes, thousands upon thousands of children are learning the truth, and we are making sure that we can reach as many children and young people as we can, including at our Creation Museum. Bill Nye, who is really the “Humanist guy,” is out to get kids and brainwash them into secularism and atheism. We need to do all we can to capture these kids for the Lord Jesus Christ.

Here are just a few photos of the children as they began streaming into the auditorium yesterday—busloads of them. 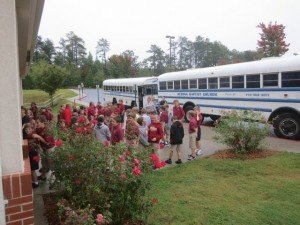 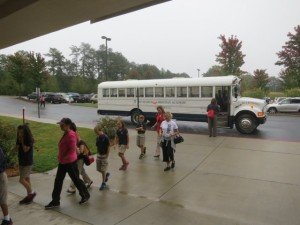 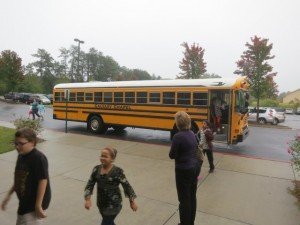 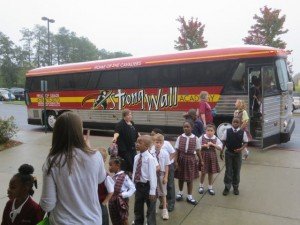 There was tremendous interest in the books and DVDs. Lots of kids will now have resources to teach them the truth about God’s Word. 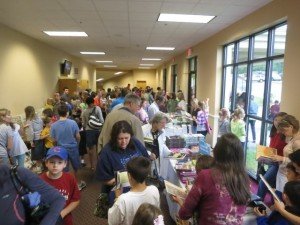 Here is a group of children from a homeschool group that just love AiG. They made a special sign to hold up. 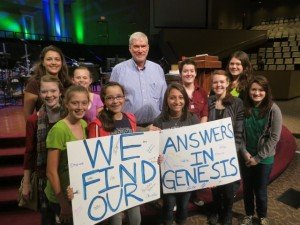 Yes, Bill Nye has inspired me to be even more fervent in teaching children God’s Word. I made sure all the kids I taught yesterday understood the meaning of the word fiction. I had them call out that the word fiction means “not true.” I gave the children a talk about the seven ages of dinosaurs based on the Bible. And the seventh age (the one we now live in) is called fiction. At the end of the session, I was able to ask students to name some things that are fiction—meaning “not true.” They called out the following:

Yes, they know now these things are fiction.

Pray for all these children as they are so bombarded by the world’s fiction all around, as the Enemy attempts to capture their hearts and souls for secularism! Pray the Lord will protect these young minds and raise them up as powerful defenders of the Christian faith.

Previous Article From the Trenches Next Article Ark Exhibit Coming