Why Won’t the Evolutionists Debate?

Last week, I posted a challenge to Bill Nye on my blog to debate AiG staff member Dr. Georgia Purdom. Bill Nye responded to Dr. Purdom’s comments regarding his recent video titled “Bill Nye: Creationism Is Not Appropriate For Children.” Of course, over the years I’ve found that many evolutionists refuse to debate creationists. In the Duane Gish era, they used to debate, but I think because they couldn’t win, they then resorted to refusing to debate and instead they just personally attack creationists and make all sorts of false claims about creation and evolution.

A few years back, one of the editions of the Reports of the National Center for Science Education (NCSE is an anti-creation organization headed up by atheist Dr. Eugenie Scott) was dedicated to convincing evolutionists why they should not debate creationists. One of the authors disparaged creationism and accused creation scientists of telling lies during debates:

This is another reason not to debate creationists: in the scientific community, theories do not rise or fall based on debate and rhetoric, but on the strength of evidence. …

Since there is no evidence to support a young earth, a sudden creation, or a global flood, one must be prepared for the main rhetorical devices of the creationist: out-of-context quotations and straw-man arguments. Creationists … have raised this tactic to an art form. This works because the audience cannot believe that a “Christian” is going to lie, and nothing the opponent says will convince them otherwise. It is a tremendous waste of time for the scientist to wade through half-truths and urban legends before even touching upon the science. (Debates, National Center for Science Education) So what do they mean by “lie”? They mean they can’t answer the arguments, so they call them a lie—and then refuse to debate! This secularist author’s reasoning is really just the typical sort of attack they launch on creation and creationists! Just call names and make accusations—no substance at all!

We also need to understand that we’re all looking at the same “evidence”—our worldview is what affects our interpretation of this evidence in relation to the past. Claiming there is “no evidence” for biblical creation and that creationists operate on “half-truths and urban legends” is not sound, respectful reasoning. It’s merely an unfounded excuse to escape having to debate a scientist with a view that happens to contradict their evolutionary view, which they hold as fact! In reality, evolution and millions of years are their way of explaining life without God—their religion.

Professor Nick Gotelli at the University of Vermont wrote a letter a couple of years ago where he explained his refusal to debate an intelligent design advocate. While we at AiG do not promote the intelligent design movement because they typically argue only for a creator, not for the Creator God of the Bible (for more, see Commentary on the Intelligent Design Movement), Professor Gotelli’s response also offers nothing more than unfounded attacks on creationists:

Academic debate on controversial topics is fine, but those topics need to have a basis in reality. I would not invite a creationist to a debate on campus for the same reason that I would not invite an alchemist, a flat-earther, an astrologer, a psychic, or a Holocaust revisionist. These ideas have no scientific support, and that is why they have all been discarded by credible scholars. Creationism is in the same category. (http://scienceblogs.com/pharyngula/2009/02/18/how-to-respond-to-requests-to/)

In a recent interview, Richard Dawkins, who is known for often refusing to debate Christians, dismissed creationists, saying, “There aren’t two theories. There’s only one theory around; there’s only one game in town as far as serious science is concerned. Of course, you’ll get negative reactions from creationists. But who cares about creationists? They don’t know anything” (Dawkins: Creationists Know Nothing, CNN). By the way, Dawkins will sometimes debate a Christian who he knows believes in evolution. He actually calls people who compromise like this “deluded” (he stated this in an interview on video we have on file).

In another article, Dawkins explained his reasons for refusing to debate Bible-believing Christians who are creationists:

Well, in their shoes, perhaps I would be clamouring for debates as well. If your case depends on pulpit-style oratory, manipulating the emotions of your audience and playing with words, debates will probably work for you very well. They do not, however, work well for explaining science. (Why I Won’t Take Part in Debate with Fundamentalists, Richard Dawkins Foundation)

So what are the common “reasons” these evolutionists claim they refuse to engage creationists in debate? Well, they include the following: alleged lack of evidence for creation; comparisons of creationism to ideas easily disproved by observational science, such as a flat earth; evolution is true, so there is no debate; and so on. They all turn out to be poorly-reasoned attacks. And I would submit that these attacks are just a deflection to avoid losing more debates against creationists.

So what nasty things are evolutionists saying about our challenge to Bill Nye? Here are a couple of recent quotes from some well-known blogs:

These debates don’t settle the truth of evolution — the evidence does. Obviously, the Creation Museum has none of that, so they feed off of publicity. . . . There’s no need for a debate, because there’s no credible challenge to evolution. Rest assured that all the “controversies” in the scientific world have nothing to do with Creationism. (Ken Ham Challenges Bill Nye to a Debate, Friendly Atheist, blog)

Writing letters and making speeches are fine things to do, but we have misgivings about live debates with creationists. It’s bad strategy, because the mere appearance of a respected scientist on the same platform gives creationism credibility and creates the illusion that there’s some kind of scientific controversy that’s worth debating — and that creationists are qualified to debate with knowledgeable scientists. It also generates press attention. Creationists are not deserving of this. (Would You Debate Ken Ham? Sensuous Curmudgeon, blog) Well, these are the same old arguments. Rather than debate us, they claim there is no evidence, that the debate is settled, and even question the credentials of our staff members (even though our researchers and  most of our speakers have doctorates in their fields!). The claim that biblical creation has no basis in reality is similar to some atheists who resort to calling creationism “child abuse” and “pseudoscience.” If there is no evidence for biblical creation and the debate really is settled on evolution, why not debate creationists? The evolutionists should be able to win easily, right?

It’s really the same reason the secular media will promote someone like Bill Nye and his video but not promote the video of AiG scientists.

It’s the same reason the secular media will often allow a compromising Christian to air his views publicly, but they rarely give any publicity to a bible-believing Creation scientist from a place like AiG.

It’s really the same reason the Creation Museum Christmas program hardly gets a mention in our local secular media, and yet it is one of the most-attended Christmas programs in the area, attracting over 26,000 people last year.

It’s really the anti-Christian bias that is growing in our culture.

Thanks for a Mother 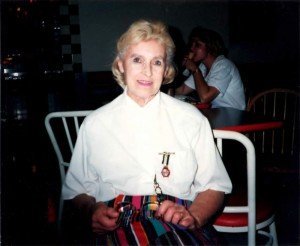 One of AiG’s founders, Mark Looy sent this email to us today about the passing of his mother in California. Please pray for Mark and his family.

A wonderful, selfless woman, devoted wife of 60 years, and my beloved mother—who loved God—passed away peacefully at 12:15 a.m. in Vacaville, California. Please pray for my father, Adrian, age 90.

Even a few weeks ago in dealing with a different health issue, my mother indicated to us that she was ready to leave this earth and was prepared to meet God. She was at peace with Him and with everyone she knew.

My mother had a very full life: raising two sons; seeing five grandchildren grow up; living in five countries (she loved America as much as her homeland of Estonia); fleeing a terrifying Soviet invasion of her country; serving as a Cub Scout leader; putting Tom and me in a good church and a Christian school where we became spiritually grounded; etc.

I’m so glad I could be with her this weekend and say my goodbyes. I don’t know if she recognized my voice, but her eyes opened at one point on Saturday when I spoke to her and told her I just flew in.