Kentucky Horses That Will Lead You Astray

Unfortunately, however, even though the park has many great attractions, it also promotes (outdated) evolutionary ideas—to both adults and children. Many of us will remember seeing the supposed “horse evolution” series in our textbooks many years ago.  However, this idea has been basically thrown out—even by many secularists. It is simply not true.  The flaws have been exposed many times, but sadly, that doesn’t always stop some museums and science textbooks from regurgitating this old idea.

Surprisingly, the Kentucky Horse Park still promotes this false idea.  It has a display called “Evolution of the Horse,” which uses a mural on the wall of the Kid’s Barn to teach children about horse evolution. It begins by claiming that the horse Eohippus (sometimes called Hyracotherium) lived 60 millions years ago, and was the horse Equus’s (what we would recognize today as a modern horse) earliest ancestor. However, Robert Owen, the discoverer of this species, named the original specimen Hyracotherium because it resembled a rabbit-like creature. So this supposed evolutionary ancestor of the horse was not a horse at all! 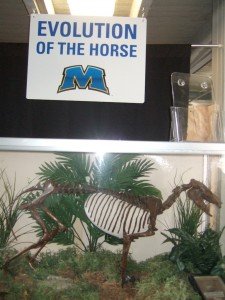 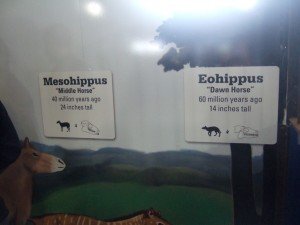 The display at the Kentucky Horse Park walks visitors through the evolution of the horse, stopping next at Mesohippus. One popular belief in regard to the horse evolution series is that as horses supposedly evolved, they got bigger. Eohippus is listed as 14 inches tall, while Mesohippus is listed as 24 inches tall. The next two horses in the display, Miohippus and Merychippus, grow steadily bigger. What’s the problem, though, with the belief that horses somehow evolved into larger and larger animals? If that were true, shouldn’t we see only very large horses today? But we don’t—horses vary in size from the Clydesdale to the much smaller Fallabella (just 17 inches tall). 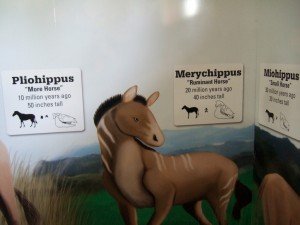 All the horses to this point in their exhibit have three-toed hooves. But shortly before visitors reach the end of the display, they see the horse Pliohippus, which is claimed to have existed 10 million years ago. The horse Pliohippus had some controversy surrounding it. Evolutionists have tried to say that Pliohippus was supposedly evidence of a transition from three toes to one toe in the evolutionary process. Their claim was based on the 1981 discovery of two fossilized hooves found together in a volcanic eruption, both from Pliohippus. But what does this discovery really prove? That three-toed and one-toed horses existed at the same time!

This children’s display ends with Equus, which evolutionists will claim emerged 4 million years ago. The adult version of the display, located in the International Museum of the Horse, looks a lot like the Kid’s Barn display—except the adults see fossil displays instead of paintings. 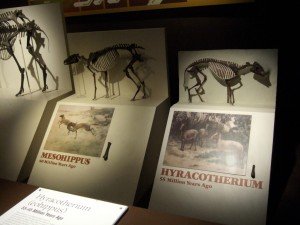 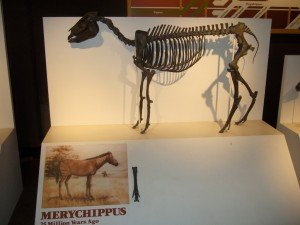 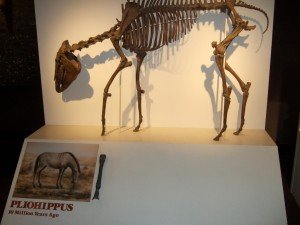 It’s sad to see that the Kentucky Horse Park has not only compromised with millions of years and the idea of evolution, but it’s also teaching a disproved idea to children and adults.   You can read more about the problems with the idea of horse evolution in the article on AiG’s website: “What’s Happened to the Horse?”

This example of a poor, unscientific display at the Horse Park is just another good reason why you need to visit a place that will tell your children the truth—the Creation Museum!

Previous Article AiG—Reaching Around the World! Next Article More Radio-activity