At the Creation Museum and out in the field speaking in churches and conferences, our speakers often meet kids who say they look on AiG speakers as their heroes (or sometimes as their “film stars” if people have seen their AiG videos). Just this past weekend, a young lady told me how much she looks up to Dr. Georgia Purdom, and she did a paper on her for a school assignment. Well, I would rather these kids look up to Christians who stand authoritatively on God’s Word than to pagan film stars or other famous secular people. But being such a role model for these young people does bring great responsibility. I often try to remind them that we all have feet of clay, and most of all, each of the speakers at AiG wants them to look up to God as their “hero” in that sense. If by our witness we can get these kids to look more to God and His Word, then that is thrilling for us.

Here is a real-life example to remind us of the great responsibility we have in the positions God has placed us in at AiG. A mother wrote the following to me:

Our family met you last year at the CHAP convention located in Harrisburg, PA in May 2011. My older boys, Christopher and Christian, were extremely excited to hear your talks and have the opportunity to meet you. They sat in the front row of your talks and were able to talk with you afterwards and have you sign their Bibles. They love having missionaries sign their Bibles when they visit our church.

I spoke with you while walking to your booth and explained how some children have sports heroes, others Hollywood heroes, etc. and that I was more than thankful that my children look to men such as yourself as being their “hero” or “role model.”

My husband, Chris, and our oldest son, Christopher, were able to attend the Apologetics Mega Conference last year and loved every minute of it! Christopher came home with many other “heroes” added to his list after that conference. Christopher has also attended Worldview Academy for the past two years and has a list of “heroes” from their organization as well!

All this being said, I pray that it is encouraging to you to know that at the beginning of 2012, Christopher along with our Teen Pastor, have started an apologetics group at our church. They meet every other Sunday evening and have been working through the Answers Book for Teens. The teens have been very responsive to the book and participate well in the conversations.

We will be bringing a group of teens and other families from our church to the Creation Museum! Christopher is so excited that people are, “Asking intelligent questions and getting intelligent answers that most members of the Church at large will never hear.”

We know that you get a lot of criticism from the media and even other Christian leaders, so we wanted to send you an encouraging story for a change. Our family is so thankful that God has called you and your colleagues to do such amazing work for Him with the AIG ministry!

What an encouragement to learn of how these young men were impacted. And how thrilling it is to see how they are using AiG resources to reach others their age.

Well, the Christopher mentioned above sent me an email as a follow up to the above letter from his mother.

Our trip to the museum was the perfect way to end the first semester of our church’s apologetics group. Up until this point, we had been going through The Answers Book for Teens every other Sunday night at our church. Not all of the group could come, for various reasons, but a large amount of the group did come. I believe everyone who came learned quite a few new defenses from what was written on the signs throughout the museum. After we got back from the museum, we had a discussion about what we had learned, and almost everyone contributed to the discussion.

In fact, as I was having a conversation with two of the members later, one of them told me that for the week leading up to the trip, he had been having doubts about the Bible and some of the other apologetics topics, and when he went to the museum, all his doubts and questions were quelled. He repeatedly told me how happy he was about that and what a blessing the museum was to him, saying he wanted to go out and give answers to others as well. He also bought The Answers Book 1, and is extremely enjoying it.

So in conclusion, our teen apologetics group was extremely blessed by the Creation Museum, and will probably return next year. We will also be continuing the group through the summer and however long God wills after that. I truly believe that at least more than one third (Already Gone) of the teens in our apologetics group will stay in church and impact the culture, and that is the goal we pursue.

Wow! Look what can be done to reach so many lives just from one young man being impacted by AiG and the Creation Museum. This is what keeps me going—knowing how the Lord is touching the hearts of people through the AiG and Creation Museum ministry.

Thanks, Christopher. You have greatly encouraged all of us here at AiG.

Here is a photo of Christopher and Christian with me. 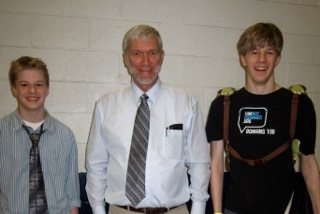