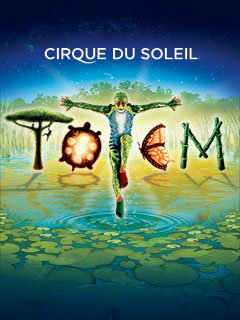 From Wikipedia (not always reliable, but this description seems accurate) we read, “Cirque du Soleil (“Circus of the Sun”) is a Canadian entertainment company, self-described as a ‘dramatic mix of circus arts and street entertainment.’ Based in Montreal, Quebec, Canada.”

It is currently presenting a program in the United Kingdom and USA called, “Totem: a fascinating journey into the evolution of mankind.”

And what is “Totem?”

TOTEM traces the fascinating journey of the human species from its original amphibian state to its ultimate desire to fly. The characters evolve on a stage evoking a giant turtle, the symbol of origin for many ancient civilizations. Inspired by many founding myths, TOTEM illustrates, through a visual and acrobatic language, the evolutionary progress of species. Somewhere between science and legend TOTEM explores the ties that bind Man to other species, his dreams and his infinite potential.

They also state the program is scheduled to open in San Jose, CA on March 2, San Diego on April 25, and in Washington, DC and Atlanta, Georgia in the future.

Here’s the home page for this show; they have 22 unique productions showing throughout the world! You also can see a preview video of what the show is like from that page.

The Guardian newspaper in the United Kingdom published a review of this program.  The reviewer stated the following:

You can’t fault Cirque du Soleil for spectacle. I was impressed when the Charles Darwin character stepped inside what looked like a huge funnel and started juggling illuminated balls. I wouldn’t say juggling is part of the average biologist’s daily work, but it did demonstrate the fact that molecules are continually in motion.

The performers’ acrobatic feats were amazing, too. Totem’s evolutionary theme—the show is meant to trace “the human species from its original amphibian state to its ultimate desire to fly”—is less solid, but there were some interesting moments.

It certainly started promisingly. Before the main show, several performers moved among the audience, entertaining us. I assumed that one of them, with his grey beard, was meant to be Darwin: he even had a tail, which is how cartoonists of the time depicted him. He was there for most of the performance, watching. I thought it might be a loose evocation of the fact that Darwin founded his career on observing evolutionary processes.

Glimpses of evolutionary theory appeared elsewhere: in the first scene, a man dressed in silver appeared from the ceiling, as if to represent the spark of life, and the stage heaved with performers and pulsing music, as if to show the primordial broth. Another act with hoops obviously evoked the circle of life, but some scenes seemed complete nonsequiturs. We went straight from the hoops to a couple sitting on a beach. I was thinking: is this Adam and Eve? Have we hopped into creationism? You can read the entire review at the this link.

This is just another example of how evolution is just accepted as fact and is being promoted in the culture.  The acrobats may be excellent in their performance, but what a shame they are using their talents to promote an anti-God philosophy.