Beware of What Is Not Said

Recently, a grandfather purchased a children’s book on Noah’s Ark for his grandchild. He thought the book could be trusted because the author is associated with a generally conservative Lutheran denomination. (In fact, we do have some great friends in this group. I and others at AiG have spoken at various of their conferences.) 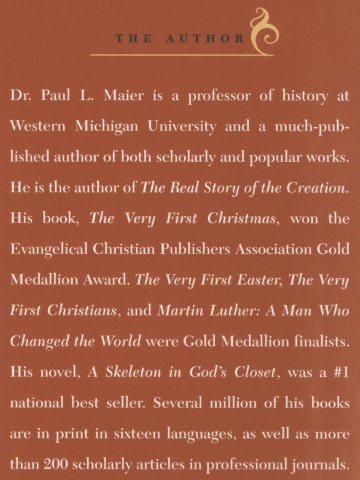 The author is Rev. Paul L. Maier, Ph.D. He is, according to a bio., a theologian and historian specializing in correlating ancient world history with the Bible, and he currently serves as third vice president of the Lutheran Church Missouri Synod (LCMS). He is the author of numerous books and scholarly articles on the Bible and ancient history as well as several children’s books dealing with Bible history. 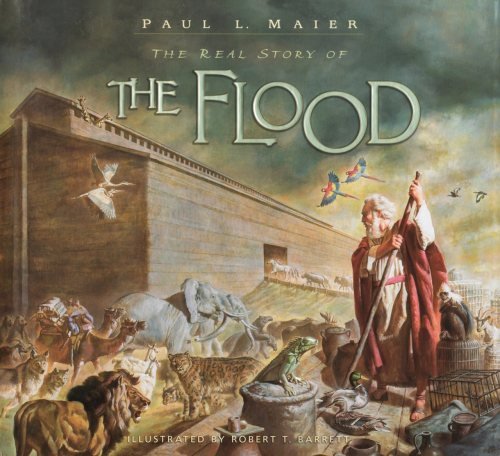 His children’s book I am referring to is titled The Real Story of the Flood and was published by Concordia Publishing House (CPH) in 2008. It is available through CPH and other Christian book stores.

The grandfather read through the book and thought there would be no problem giving this to his grandchild, as it seemed to summarize the account of Noah’s Ark and the Flood as given in the Bible. But then he read the epilogue!

In particular, he was dismayed to read the following: 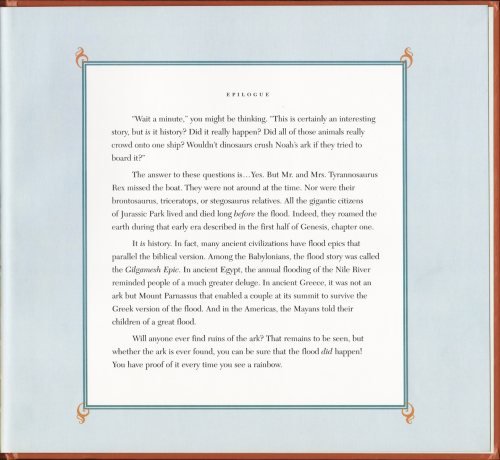 “Wait a minute,” you might be thinking. “This is certainly an interesting story, but is it history? Did it really happen? Did all of those animals really crowd onto one ship? Wouldn’t  dinosaurs crush Noah’s ark if they tried to board it?”

The answer to these questions is… Yes. But Mr. and Mrs. Tyrannosaurus Rex missed the boat. They were not around at the time. Nor were their brontosaurus, triceratops, or stegosaurus relatives. All the gigantic citizens of Jurassic Park lived and dies long before the flood. Indeed, they roamed the earth during that early era described in the first half of Genesis, chapter one.

After reading this, he gave the book to AiG speaker/researcher, Dr. David Menton instead of giving it to his grandchild! Dr. Menton has written a review of this book for the Lutheran newspaper Christian News, and I have excerpted sections of his review below. After you read what Dr. Menton has written, I will share with you a practical application for us in regard to biblical authority in our churches.

Dr. Menton (himself a grandfather) wrote the following in his review:

If Maier had ended his book without the epilogue, I could recommend the book without reservation for the young reader, but sadly, the epilogue will raise troubling questions for many Christians. In his epilogue Maier anticipates certain questions from the young reader such as “Did all those animals really crowd onto one ship” and “Wouldn’t dinosaurs crush Noah’s ark if they tried to board it?” Here, Maier should have pointed out that not all dinosaur kinds are large, that God may well have chosen smaller juveniles rather than large adults, and in any event, no dinosaur would have crushed a ship the size of Noah’s ark. Instead, Maier assures the young questioner that dinosaurs were not even around at the time of the Flood! He declares that “all the gigantic citizens of Jurassic Park lived and died long before the flood.” Maier doesn’t tell us how long he has in mind, leaving the reader to wonder if perhaps he uncritically accepts the evolutionist’s claim that the dinosaurs died off about 65 million years ago, long before the evolution of man.

Maier’s comments in his epilogue raise many questions with profound theological implications for the Bible-believing Christian. For example, does Maier accept the days of Creation as ordinary days having an evening and morning? Or does Maier perhaps consider the earth to be millions or billions of years old and if so, how does this fit into the first chapter of Genesis? Since most of what we know (or think we know) about dinosaurs is gleaned from the fossil record, is Maier suggesting that the water deposited sedimentary rock layers of the earth and their dinosaur fossils were already in place long before the flood? But if the flood were global, as Maier implies, and truly covered the highest mountains that then existed (as the Bible clearly states), it would have badly eroded and faulted any previously existing sedimentary layers and their fossils. Indeed such a Flood would globally deposit new sedimentary layers and fossils contemporary with the time of the Flood. This is why most Christians who accept the evolutionists millions of years for the age of the fossils in the geological column view Noah’s flood as being regional and not global in nature. Finally, did the dinosaurs (along with nearly 90% of all creatures on the earth according to evolutionists) die off long before Adam fell into sin? This is important because it implies that there was suffering, carnivores and death before the fall.

Raising such questions at the end of a children’s book that otherwise seems soundly Biblical is distressing. But it is even more distressing that there appears to be a jarring inconsistency between the books prologue and its epilogue, making it difficult for this reviewer to believe they were written by the same author. In the prologue Maier states that “God created a perfect paradise” and that “disease and death were not part of God’s original plan” but all that changed when “man and woman fell into sin, and a general rot set in.” But in the epilogue Maier says that dinosaurs and many other creatures lived and died in“that early era described in the first half of Genesis, chapter one” which would be before the fall of Adam and Eve into sin. Some clarification is certainly in order.

We should bear in mind that teaching children, writing books for children, and even giving books to children involve a great responsibility for all of us. We should take care lest we offend the little ones who come to Jesus.

Here are some lessons we can all learn from this book.

The point I want to make is that it is not just what a book or Bible study states or what a pastor preaches. Look for what is not being said. That can be very revealing!