A new exhibit we call “Promo Hall” has been completed at the Creation Museum. After visitors leave the Palm Plaza area, there are now special exhibits explaining the ministry of AiG and giving the history of the Creation Museum—starting with the vision for the museum, which began over 30 years ago, and continuing on to its completion in 2007.

Here are some photographs:

A wide angle photograph of the entire exhibit 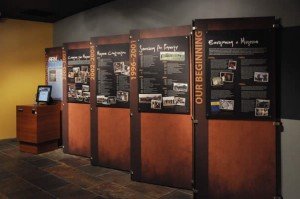 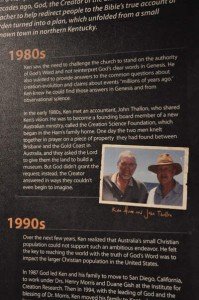 A close up of one of the history panels with an historic photograph. Over 30 years ago, founding board member (John Thallon) of the creation ministry (which began in our house in Australia) and I knelt down on a piece of property in Australia and prayed for a Creation Museum. The Lord answered that prayer 30 years later in Kentucky in 2007!

Yesterday, I blogged about well-known radio host (The Bible Answer Man) Hank Hanegraaff who has been promoting Dr. William Dembski (a professor at Southwestern Theological Seminary in Texas) who believes in billions of years and forms of evolution. If you didn’t get to read my blog, I suggest you read it.

Here is a summary of the third interview Hank Hanegraaff had with William Dembski:

“The End of Christianity – Part 3”

At 5:05, Hanegraaff wonders how God could create a world that seems to have had evil in it even before the Fall, and how to reconcile the “two books” God has given us: the Bible and nature. At 25:35, Dr. Dembski uses Christ’s death (which resulted in the purchase of salvation for believers past, present, and future) as a frame for his theory that the Fall and the resultant introduction of evil worked retroactively. At 29:30, Dr. Dembski claims that God brought evil into the world in anticipation of Adam and Eve’s sin, but that God can still call the universe “good” because the evil was “in God’s purposes.” Using chronos and kairos time, Dr. Dembski says that the evil can precede the sin because of kairos (“God’s time”). He argues that God did not intend for man to sin, but that He prepared in anticipation for it.

It is so sad to see the lengths Christian academics will go to fit man’s religion of millions of years into God’s Word.  Let’s pray for them that God will convict them concerning this compromise that undermines the authority of the Word of God.