Here is the text of a press release sent out from AiG this week after we had a special dedication ceremony for the new “ape-man” exhibit that is now operating at the Creation Museum: 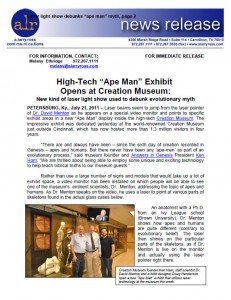 Laser beams seem to jump from the laser pointer of Dr. David Menton, as he appears on a special video monitor and points to specific exhibit areas in a new “Ape Man” display. The exhibit has opened  at the world-renowned Creation Museum just outside Cincinnati, which has now hosted more than 1.3 million visitors in four years.

“There are and always have been – since the sixth day of creation – apes and humans. But there never have been any ‘ape-men’ as part of an evolutionary process,” said museum founder and Answers in Genesis president Ken Ham. “We are excited about being able to employ some unique and exciting technology to help teach biblical truths to our museum guests.”

Rather than use a large number of signs and  models that would take up a lot of exhibitspace, a video monitor has been installed on which people will be able to see one of the museum’s  eminent scientists, Dr.  Menton, speaking on the topic of apes and humans. As Dr. Menton speaks on the video, he  uses a laser to point at various parts of the skeletons found in the real glass cases below.

An anatomist with a PhD from an Ivy League school (Brown University), Dr. Menton  shows how apes and humans are quite different (contrary to evolutionary belief). The laser then shines on the particular parts of the skeletons, as if Dr. Menton is live on the monitor actually using the laser pointer. 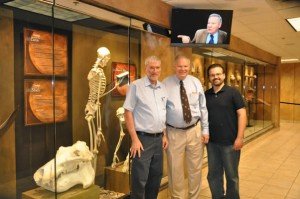 The technology behind the exhibit is credited to museum designer Doug Henderson who was trying to think of a way to have parts of skeletons light up as they were being taught about in accompanying videos. LEDs and fiber optics weren’t practical because of wiring issues, so he then hit on the idea of laser pointers.  “While the technology isn’t new, the unique aspect of this exhibit is how the lasers interact with the video and seem to be coming from Dr. Menton’s laser pointer on the monitor,” Henderson said.

Equating the combination to a popular chocolate and peanut butter candy, Henderson said the exhibit brings together two great technologies that work well with one another. He observed that he hasn’t seen this combined utilization duplicated anywhere else before. A year in the making, the exhibit required the input of several museum teams working together, including the film production crew which had to design a box frame and lighting to make it appear that Dr. Menton was leaning out of the screen to point his laser at specific parts of the skeletons.

The electronics and audio/visual teams then had to wire and position the lasers so that the angles of the light streams matched what seemed to be coming from the video monitor. “We’ve really pioneered something here, and I expect to see it duplicated in other museums around the world,” Henderson added.

The Creation Museum has other new and high-tech exhibits in the works, and is about to open a new multi-purpose auditorium to host special events and large speaking opportunities for the community. A stand-alone observatory with powerful telescopes is also under construction to complement the newly upgraded high-definition planetarium.

“We praise the Lord for the creative individuals here at AiG and the Creation Museum who are able to envision and then produce such exciting new exhibits for our guests,” Ham said. “We hope to continue growing and expanding our offerings at the museum – in addition to the upcoming Ark Encounter – as we seek to present biblical history to a questioning culture.” Here are some more photos of the dedication event conducted in the Main Hall at the Creation Museum: 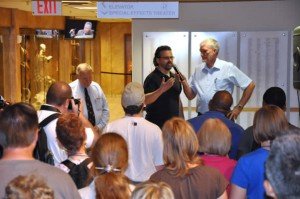 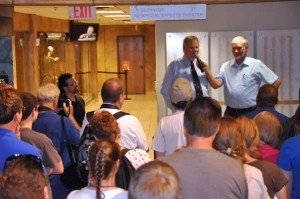 Ken interviewing Dr. David Menton (AiG speaker who is featured in this exhibit)

Some of the museum guests who gathered in the Main Hall for this special event.

Speaking in Phoenix Today and Tomorrow

I am giving a total of eight presentations at the homeschool convention in Phoenix, Arizona, over the next two days. For details, go to the event page.