Yesterday we visited the island of Santa Cruz. This island has about 12,000 people that reside in the coastal town of Puerto Ayora. The town is also home to the Charles Darwin Research Station. This organization works with the Galapagos National Park to conserve the plant and animal life of the islands. The programs include eradication of introduced plant and insect species and feral animals (e.g., goats and pigs) and reintroduction of species that have been lost from islands due to feral animals or human eradication (e.g., land iguanas). Of course at the interpretation center we also see signs talking about millions of years and evolution, especially with the finches. However, what they understand as evolution over millions of years we know as natural selection and other mechanisms over a few hundred to thousand years, leading to different finch species.

The research station also boasts a large tortoise breeding program that helps reintroduce and maintain tortoises on certain islands. The star attraction of the day was the giant tortoises. The first one we see (that isn’t still a baby!) is Lonesome George. This tortoise is probably over 150 years old and the last of his species from Pinta Island. There are several different species of giant tortoises which are unique to the island on which they reside. They are trying to breed George with females from Volcano Wolf that appear to be Pinta hybrids in the hopes of re-establishing the species.

In another area we see tortoises from a variety of islands. When we arrive and begin taking pictures, they seem to be looking right at us and begin to walk towards us. What a great photo opportunity! Later we are allowed in one of the pens and able be quite close to them. They are truly magnificent creatures.

We then travel to the highlands of Santa Cruz by bus to see tortoises in the wild. We spot one on the road before we even make it there. Santa Cruz tortoises are the largest of the Galapagos tortoises. I thought the other ones were big, but these are much bigger! We see others once we stop munching on vegetation. Our guide tells us that they must eat all the time to maintain their enormous 500-pound bodies. They spend six months traveling from higher locations to lower ones (like we are at now) in search of food and water and then will spend six months traveling back up to do the same.

We also saw some volcanic remnants like a lava tube. The tube is formed when the overlying lava hardens making a tube which the lava flows through. Once the lava is finished flowing, what is left is an enormous cavern you can walk through. We also see two collapse craters. The naturalist tells us that these form when the magma underneath is emptied out by the erupting volcano. These craters are huge, and it’s mind-boggling to think of all the lava that must have spewed out of the volcano to cause these to form.

We did some souvenir shopping in town and got some yummy treats like a chocolate-covered frozen banana. It is early morning now, and we have just arrived in Isabela, one of the youngest islands with still-active volcanoes. We will take a long bus ride and do about an hour of hiking to reach the summit of the volcano Sierra Negra. It is home of the second largest caldera in the world and is an active volcano. Enjoy the pix! 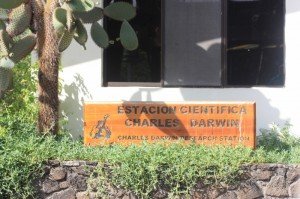 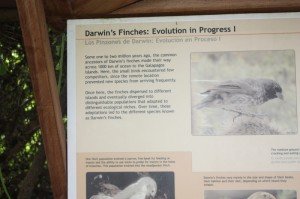 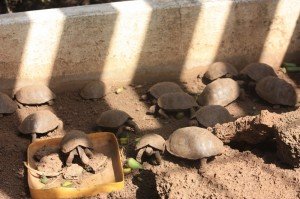 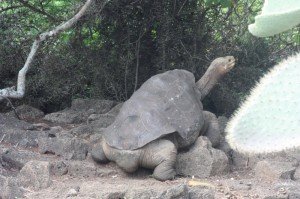 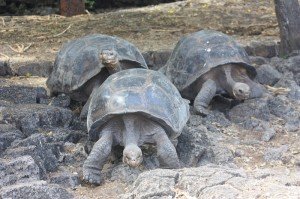 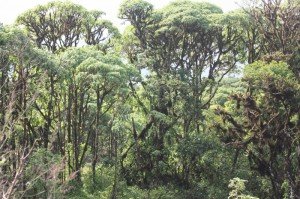 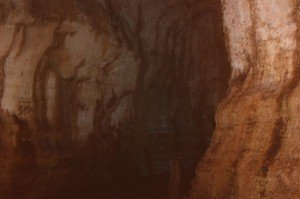 Inside the lava tube 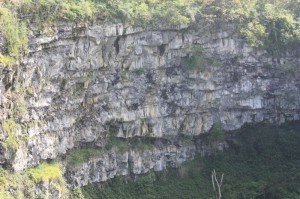 Side of enormous collapse crater