AiG staff have the privilege of hearing messages from many Christian leaders from various ministries. This year, we have had a number of senior pastors of large churches visiting the ministry and the Creation Museum. Last week, Dr. Danny Wood from Shades Mountain Baptist Church (Birmingham, Alabama area) visited with us and shared a special devotion with the staff. 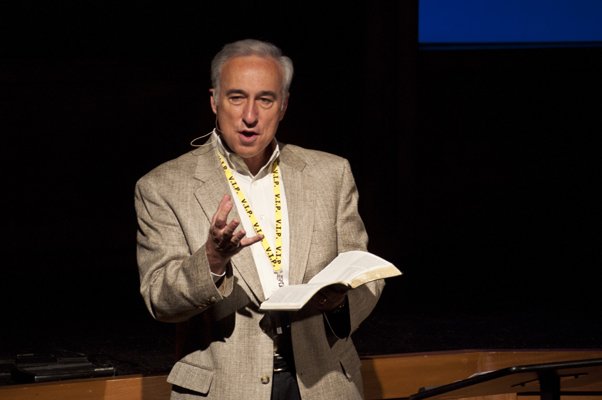 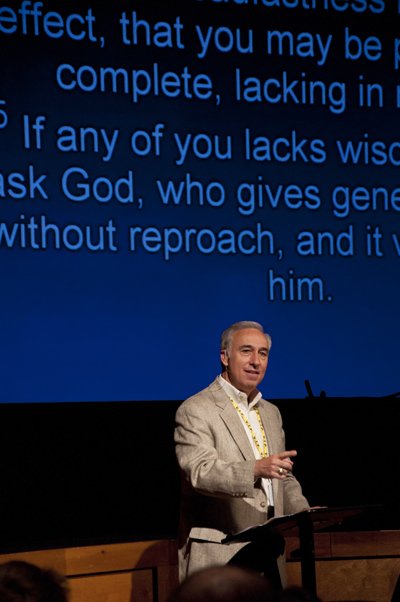 According to a bio I read, Dr. Danny Wood was born in Birmingham, and at the age of six, he moved to Atlanta, Georgia. He graduated from Auburn University in 1975 with a degree in Business Marketing, and began his career in marketing with South Central Bell (now BellSouth) in Birmingham. He joined Shades Mountain Baptist Church—where he taught in the singles ministry, was ordained as a deacon, and married his wife, Janice, in 1978.

After eight and a half years in the business world, Danny and Janice felt called to full-time ministry. In 1984, they moved to Fort Worth, Texas, where he attended Southwestern Baptist Theological Seminary and served as minister of young married adults at Prestonwood Baptist Church in Dallas. He received a Master of Divinity degree from Southwestern Baptist Theological Seminary in 1986, and was called as Pastor of First Baptist Church in Ruston, Louisiana, in 1988.

In February 1997, he was called to Shades Mountain Baptist Church as Pastor. In 1999, he earned his Doctor of Ministry degree from Beeson Divinity School in Birmingham.

You can listen to the devotion Dr. Wood shared with our staff below:

Dr. Terry Mortenson of our staff has just finished up a conference in Scotland. It received publicity in local newspapers—like this one below—through our surgeon friend, Dr. Nagy Iskander, in Glasgow, Scotland: 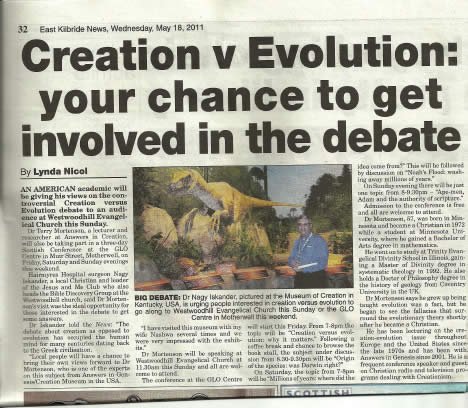 We look forward to hearing a report of the meetings Terry will be conducting in the Middle East soon.

It was thrilling to receive this comment from a person in Brazil who was a part of AiG’s recent ITS (International Training Seminar) held at our offices in Kentucky:/

I want to share with you that the training week time at the Creation Museum had a strong impact on my life. The lectures were very important and the Museum in itself. But What most impacted me was the commitment of those people with their ministry and the testimony of each member of the ITS. That does not leave my mind.

After my return, me and . . . a 2010 ITS [participant], started weekly meetings with teachers of our Church's Sunday school and also two teachers from secular school, who assisted in our church. We started studying the book "Why Won’t They Listen?" and giving answers to their questions. Please pray for these meetings. We are having an average of 25 people per meeting. At this point it is difficult to manage our time with the secular work, because we are translating the stuff we present. Also there are some questions we need to study to give an adequate response in the next week.

We have bigger plans for the creationist ministry in Brazil. So, please, pray for that. Yes, pray for these dear people in Brazil as they work to get this vital creation/gospel message out in their country.