A national multimedia ad campaign – the largest, most extensive ever by a godless organization - launches today and will include a spot on NBC Dateline on Friday, November 12, as well as other television ads, that directly challenge biblical morality and fundamentalist Christianity. The campaign, sponsored by the American Humanist Association, also features ads in major national and regional newspapers and magazines demonstrating that secular humanist values are consistent with mainstream America and that fundamentalist religion has no right to claim the moral high ground.

They then give two specific examples (many more are on their website) of how they will conduct this campaign. I have further quoted from their press release below, and will then make relevant comments:

The ads juxtapose notable humanist quotes with passages from religious texts, including the Old Testament, the New Testament and the Quran. The ads then ask the audience to "Consider Humanism." One example is the following pairing: The Bible: “A woman should learn in quietness and full submission. I do not permit a woman to teach or to have authority over a man; she must be silent.” I Timothy 2 (New International Version) Humanism: “The rights of men and women should be equal and sacred—marriage should be a perfect partnership.” Robert G. Ingersoll, in a letter dated April 13, 1878.

First of all, context is vital. And, of course, the humanists claim to have checked that (as you will note further on). But their humanist response to this text shows they do not understand (or are deliberately distorting, which is probably more the case) the full context. The section in 1 Timothy 2 is in the context of the church; it has nothing to do with the equality of man and woman, but is to do with roles in light of the spiritual headship of men in the church. Other passages of Scripture (such as Matthew 19 and Galatians 3:28) make it very clear that men and women are equal in personhood and in relationship to God. However, God has given each different roles.

Besides, from an atheistic perspective, why should anyone respect anyone anyway? Why shouldn’t people decide they are superior to others if they want to? You see, when there is no absolute authority and man determines truth, then it is all relative. How inconsistent of these humanists to claim humanism gives a basis for equality of man and women, when the opposite is true. Only the Bible gives the true absolute basis for equality.

Another pairing is: The Bible: “The people of Samaria must bear their guilt, because they have rebelled against their God. They will fall by the sword; their little ones will be dashed to the ground, their pregnant women ripped open.” God, Hosea 13:16 (New International Version) Humanism: “I cannot imagine a God who rewards and punishes the objects of his creation, whose purposes are modeled after our own—a God, in short, who is but a reflection of human frailty.” Albert Einstein, column for The New York Times, Nov. 9, 1930.

How dare these secular humanists, who generally support the ripping up of millions of children in their mother’s womb year after year (abortion), point such a finger at a Holy God as they have done here? And a group that does not believe in God—a group that therefore has no basis whatsoever to accuse anyone on moral grounds—dares to accuse God as they have done! By what absolute moral standard have they made their determinations, other than their own opinion? How inconsistent can they get?!

Now, what is the context of what Hosea is prophesying (predicting) about the future of Samaria? God is a Holy God, and as such, He has a right to turn people over to judgment. And who were those people? They were God’s own chosen people in the northern ten tribes of Israel (called Samaria), whom God had graciously liberated from slavery in Egypt and lovingly cared for in the wilderness and brought into the Promised Land. But in spite of all God’s blessings, they were a people who had turned to pagan idolatry (Baal worship) and even human sacrifice (Hosea 13:1–2). Those are the people to whom Hosea, a fellow Israelite, gave a prophecy that they would be destroyed in this way (a prophecy fulfilled by the invasion of the wicked Assyrians that the sovereign Lord used to judge His people).

But note, the secular humanists of today have supported the killing of millions of more children than were killed in Samaria—and they dare to accuse a Holy God the way they have? Given the worldview of these secular humanists, why does it even matter? Everyone is going to die anyway, and from the humanist perspective, life has no ultimate meaning and purpose—so when people die, that is the end of them. So why on earth does it matter to the humanist what happened in ancient Samaria?

The real question is: “Why is everyone going to die?” And it is only by understanding that man sinned against a Holy God (Genesis 3), and that death is a consequence of our sin, that we can ever understand why people die and why the Samarians were judged as they were.

To see images and videos of the ads and find more information about the campaign please visit: http://www.considerhumanism.org “Humanist values are mainstream American values, and this campaign will help many people realize that they are already humanists and just did not know the term,” said Roy Speckhardt, executive director of the American Humanist Association. “Humanists believe in and value love, equality, peace, freedom and reason – values that are comparable to those of moderate and liberal religious people.”

In addition to the television as on NBC, ads will also be displayed on cable channels. Print ads will appear in major newspapers, including USA Today, the Seattle Times, the Village Voice, the Atlanta Journal Constitution, the Independent Triangle, and the San Francisco Chronicle, and magazines, including Reason and The Progressive. Ads will also appear on Metro trains in Washington, D.C., on billboards on I-95 near Philadelphia and in Moscow, Idaho, and on buses in select cities.

“We want to reach people in every corner of the U.S., from all walks of life, to raise the flag for humanists and show others that they have more in common with us than with biblical literalists,” said Speckhardt.

“It’s important that people recognize that a literal reading of religious texts is completely out of touch with mainstream America,” Speckhardt added. “Although religious texts can teach good lessons, they also advocate fear, intolerance, hate and ignorance. It’s time for all moderate people to stand up against conservative religion’s claim on a moral monopoly.”

All quotes from religious texts were checked by scripture scholars to ensure accuracy, context and proper translation.

The Stiefel Freethought Foundation was the primary sponsor of the Consider Humanism campaign with a $150,000 donation. Another $50,000 was raised from supporters of the American Humanist Association for the launch of this campaign, bringing the total ad buy to $200,000 so far.

The American Humanist Association (www.americanhumanist.org) advocates for the rights and viewpoints of humanists. Founded in 1941 and headquartered in Washington, D.C., its work is extended through over 140 local chapters and affiliates across America. Humanism is the idea that you can be good without a belief in God. There is no doubt the secular humanists are becoming more aggressive in our culture—it is certainly a sign of the spiritual battle that is heating up day after day. Such a press release reinforces the need for God’s people to stand on God’s Word and call this nation back to the Word of God. One of the ways God’s people can be involved in publicly standing for the Bible is to sponsor one of the billboards AiG has designed and can be found on the www.iamnotashamed.org website. Here are pictures of the billboards: 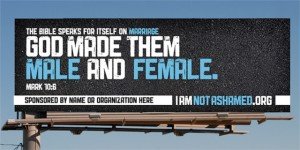 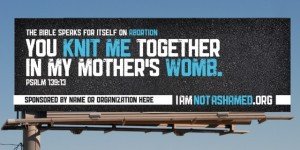 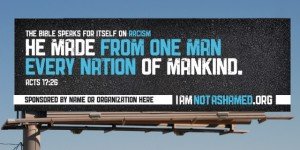 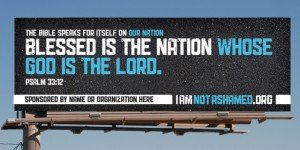 You can find out how to sponsor these billboards here.

I also ask you to pray for and support ministries like AiG that are dedicated to calling the church and lost sinners back to the authority of the Word of God and to Jesus Christ, who is the Author of that Word (from Genesis 1:1 to Revelation 22:21) and the Savior of the world as revealed in that Word.

Isn’t it fascinating how these secular humanists spend so much money fighting against the God they don’t believe exists and for what ultimate purpose? From their perspective, one day no one will know any of this life ever happened—the whole universe is meaningless, and it will all die out eventually. Why should they care at all? The reason they are so inconsistent is because they know there is a God. But as Romans 1:18–23 and 2:14–16 state, even though they know God exists and God’s moral law is written on their hearts (which is why by and large they understand a moral code), they actively “suppress the truth in unrighteousness.” They cover their ears, so to speak, yelling, “No, you are not real! No, I don’t want to submit to You! No, I refuse to admit I am a sinner! No, I want to decide truth for myself!”

As they are our relatives (we are all one race, descended from Adam), humanists need our prayers. Their souls are doomed to eternity separated from God who is the source of all goodness and life. But our merciful and loving God wants to save them from that.

But God demonstrates His own love toward us, in that while we were still sinners, Christ died for us. (Romans 5:8)

If you confess with your mouth the Lord Jesus and believe in your heart that God has raised Him from the dead, you will be saved. (Romans 10:9)

Called unto Him whom He would: and they came unto Him

(Mark 3:13) And he went up into a mountain, and called unto him whom he would: and they came unto him.

Every morning from the quiet place the Lord Jesus Christ calls us to meet with him, as Christians we respond to His call, and have our quiet time with Him. Thanks for stopping by and thanks for praying,

Previous Article Why Were They Banned? Next Article It’s an Attack on the Son