How Does an Atheist Cope with Emotional Personal Issues?

Michael Shermer, well-known atheist and publisher of Skeptic magazine, wrote a guest column on Wednesday in the national newspaper USA Today on the so-called “empty nest syndrome.”USA Today—with an anti-Christian, anti-creationist column that appeared Monday—is committed to running commentaries to bolster the small minority atheist group in the USA. Well, maybe USA Today will print my rebuttal—a letter to the editor we submitted Tuesday—or feature a commentary by a Bible-believing Christian.

In this column by Shermer on Wednesday, one can read how an atheist’s bankrupt belief system attempts to explain the emotional empty nest syndrome by a purely random evolutionary belief—one that is reduced to chemical interactions. Shermer states the following:

It has been a little more than a month since my daughter Devin moved into her dorm at Occidental College . . . and life as I know it has come to an end. Or that's what it feels like . . .

The nest's empty loneliness is almost unbearable. Why does it hurt so bad? Science has an answer: We are social mammals who experience deep attachment to our fellow friends and family, an evolutionary throwback to our Paleolithic hunter-gatherer days of living in small bands. Bonding unified the group, aiding survival in harsh climes and against unforgiving enemies. Attachment between parent and offspring assured that there is no one better equipped to look after the future survival of your genes than yourself. We are a pair-bonded species, practicing monogamy (or at least serial monogamy) long enough to get our children out of childhood. . . .

We parents can't help feeling this way, and neuroscience explains why. Addictive chemicals such as dopamine and oxytocin surge through the brain and body during positive social interactions (especially touch). This causes us to feel closer to one another. Between parents and offspring, it cements a bond so solid that it is broken only under the most unusual (and usually pathological) circumstances. Mothers of serial killers have been known to weep in court and plead for leniency, even in the presence of the mothers of the murdered victims. The Bible refers to such people when we read that “the fool has said in his heart there is no God” (Psalm 14:1), and that men “suppress the truth in unrighteousness” (Romans 1:18).

You can read more of this atheistic, evolutionist nonsense on USA Today’s website.

It was thrilling to receive such overwhelming response from the Lutheran pastors’ conference I spoke at in Michigan on Tuesday.  I spoke to a few hundred pastors and their wives from the Missouri Synod Michigan district.  It is such an honor and privilege to speak to such a group, for AiG is really influencing all the congregations of all the churches represented.  Here are some photographs from the event: 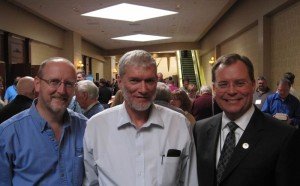 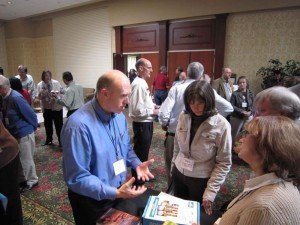 My brother Stephen talking to participants about the resources. 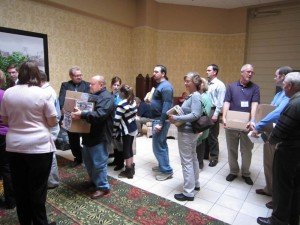 We had a phenomenal response to the AiG apologetics resources. 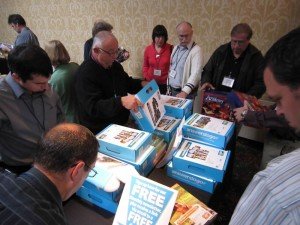 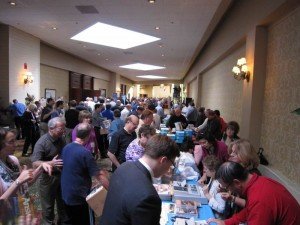 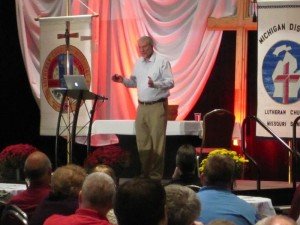 Speaking to the conference attendees.

Today I received a postcard from a child in Pennsylvania. It is one of the most precious things I have ever received. I thought I would share it with you all.  It reads, “Me, my sisters, and my mom loved the services. Me and my mom came to every one. I like how could a loving God service because my dad died over the summer June 20th and I’ve been mad at God. My hampster died 2 weeks ago and I’ve been mad at God but we’ve been bought with a price and are not our own.”   This note was signed by Tyler. (As I transcribed the note, I added all the punctuation, which was missing, but otherwise, the wording and spelling is Tyler’s.)   All I can say is, “Thanks, Tyler. You truly blessed the heart of this tired old doctor today.

You can find out more about Dr. Tommy Mitchell (and how to request him to be a speaker in your church/area) on his speaker’s page.

(Deuteronomy 33:16) the good will of him that dwelt in the bush

The explanation for the origin of our salvation was the initiative and good will of the Lord Jesus Christ. Thanks for stopping by and thanks for praying,