Excited About All the Knowledge

We receive an increasing number of testimonies from young people who have been influenced by the AiG ministry.  Here is one example from this past week:

Earlier this summer I went to the [homeschool] convention and heard Mr. Ham's talk about dinosaurs.  After that, I went to every single session he gave, including the one titled "Raising Godly Children in an Ungodly World" (which is kind of weird, since I'm only in seventh grade).  As I listened to those talks . . . I suddenly found myself wishing I had brought a pencil and notebook along so I could take notes. 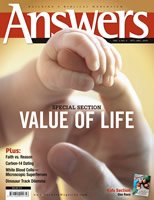 When we got home, I started looking through the Answers magazines that my Dad got in the mail and found that they were very interesting, and I started reading the Kids Answers [special children’s insert inside the magazine] to my six-year-old brother, who LOVES them!  I would be very interested to see an article in the Answers magazine about caves, and all the cool formations that the stones make.  It would be really cool to see how that would connect with the Flood, and all the minerals that would be seeping through the ground and forming the stalagmites and stalactites and stuff.  (That's what I'm guessing formed them, but it'd probably be better to learn from a more educated resource than myself.)  I would also be interested in an article about Stonehenge [in England], and one about the Ark of the Covenant.

At the convention, my Dad bought the Answers Academy DVDs, and now our church is doing the series, which has been VERY cool.  The theme music gets stuck in your head, though . . . I am very excited about all the knowledge that I have gained through AiG, and can't wait to learn more!

The Lord Jesus Christ knows that we have a cancerous growth in our spiritual heart of a love for sin and half heartedness to God; as we yield to Him He cuts it out. Thanks for stopping by and thanks for praying,