No, he did not have his Super Bowl ring on him when he visited the Creation Museum a few days ago, but Jay Schroeder’s tour of the museum with his wife Debbie (and their young daughter) was a blessing to many of our staff who met him (I was away in St. Louis speaking at a conference). 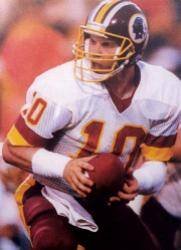 Not only was Jay an all-star football player (what’s called a “Pro Bowler”) and was on a Washington Redskins team that won the Super Bowl in the 1980s, he is now best-known for his Christian testimony (through ministries like the Fellowship of Christian Athletes). He and Debbie have an interest in forming some kind of creationist ministry in the West. Here is Jay’s testimony.

The visit by the Schroeders (they spent three days at the museum!) brought back some memories for his family. Jay played for one year with our Cincinnati Bengals; you can read how this city turned out to be a blessing for their son C.J., as recounted by his wife Debbie at this link:

By the way, last week the star running back for the Cincinnati Bengals—Cedric Benson (who ran for more than 1,200 yards last year)—visited the museum. Some other Bengals players have toured in the past year.

OK—I have to admit it. I did not know all of this info about pro football. I had to rely on others here on staff to tell me all this!

This Sunday, Monday, and Tuesday, I have a very heavy schedule of speaking at Crossroads Community Church, Vancouver, Washington (near Portland, Oregon).  This is a special time for us—our entire video team with loads of equipment are going to video-tape all my sessions.  We have been wanting to update my video series for a long time—right now, the most popular series of my talks has me with brown hair!!!  People ask me if it is my son!!  Ben Wilt, the Director of our AV department had special (incredible) sets built for the stage—I am amazed at the talent the Lord has brought to AiG.

I will bring up updates throughout the conference.  By the way, if you live in the Portland/Vancouver area, you could attend and be a member of the studio audience for this series that will eventually be sold around the world.

Here is a photo (taken with a cell phone so excuse the mediocre quality of the shot) as our AV team put the specially designed sets together on the stage at the church. 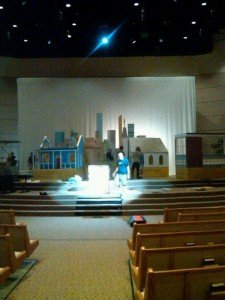 For detailed information on the conference, go to http://www.answersingenesis.org/outreach/event/6689/