Putting Down a Book

I’ve mentioned before on this blog that I’m not a real fan of fiction books—they have to be real exciting to hold my interest. But my Australian friend Julie Cave succeeded with her novel Deadly Disclosures. I couldn’t put it down.

Yesterday, Julie—who’s visiting the United States with her husband Terry, daughter Jasmine, and Terry’s parents—spoke to our staff at our regular chapel meeting. My brother Steve, who had the privilege of presenting the gospel to Terry over several years (and he eventually became a Christian), interviewed Julie about the book. Here is a photo of Julie with Steve in front of the staff: 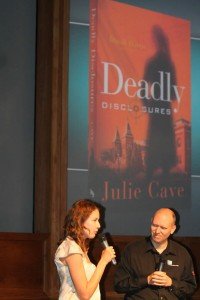 Julie’s novel is a murder mystery set at the Smithsonian in Washington, D.C. The creation/evolution issue is the book’s backdrop, and the gospel is presented in a very effective way.

You can order Deadly Disclosures from the AiG online store. I suggest it as a Father’s Day gift. The book will help fiction fans anywhere engage with the importance of the biblical authority message starting from Genesis. Or consider it as summer reading—one of those books you will love to take on vacation with you.  And if you are not a fiction fan?  Well, obtain this book and read it, and you will become a fiction fan—of books Julie writes, anyway.  And yes, she is writing a sequel—in fact, there are two more in this series coming down the road.

Before Julie gave a summary of Deadly Disclosures to the staff, my brother Steve interviewed Julie's husband and Steve's long-time friend, Terry Cave. Terry and Steve have previously worked together in the banking/financial planning business in Australia. Starting back in the 1990s, Terry—a non-Christian—had many questions about the Christian faith. Eventually, using “creation evangelism” to answer Terry’s questions about the accuracy and authenticity of the Bible, Steve was happy to see Terry become a Christian (in 2005). Terry then helped Steve create a small group Bible study called Answers for Life. 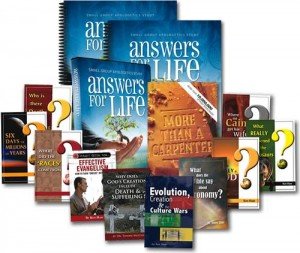 This is a program designed for churches that have small group Bible studies. Not only to equip Christians to have answers to why there is death and suffering in this world, why evolution doesn’t show that the Bible is wrong, etc., but also to have these questions answered for non-Christians attending the Bible studies. Answers for Life became an outreach that encouraged non-believers to attend these Bible studies, so they could be given answers to some of the most-asked questions about the Bible—and thus, see them become more open to the gospel message. 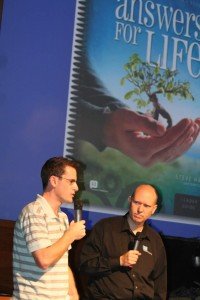 A Missionary Group with a Firm Foundation For many years we have been selling another Bible study program called Firm Foundations: Creation to Christ (both adult and children’s versions). 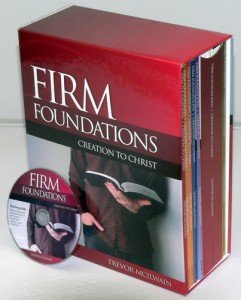 It is produced by the missionary organization called New Tribes Missions. New Tribes is trying to reach the 2,500 people groups that have largely been untouched with biblical truths. A typical team learns the local language and gets to understand the culture in order to present the gospel message in a way that people will better understand it. New Tribes also teaches the Bible chronologically, starting with the Book of Genesis inlaying a foundation for the gospel.

We had visitors here at the Creation Museum last week who work on the Firm Foundations Bible study program. Paul and Pam Rasmussen (with granddaughter Courtney) visited our museum, and they briefly met me between meetings. Here is a photo of me with them, along with their host Frank Zitzman on the right (a local AiG supporter): 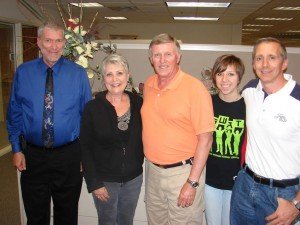 Paul shared with me that for more than twenty years, he and Pam worked as New Tribes missionaries in Colombia. They now work out of the New Tribes’ Florida headquarters. In Colombia, their main ministry was Bible translation.

The Bible study they work with follows the Bible’s pattern of progressively revealing God’s plan of redemption within biblical history. The lessons begin in Genesis, as man’s sinful state and separation from God are taught, and then move through the Old Testament and the life of Christ; at that point, people have a full understanding of biblical redemption, especially as Christ’s death, burial, and resurrection are presented. Christ is shown as the promised Redeemer of Genesis 3.

Find out more about Firm Foundations on the AiG online store.

(John 7:25-26, 46)  Then said some of them of Jerusalem, Is not this he, whom they seek to kill? But, lo, he speaks boldly, and they say nothing unto him. Do the rulers know indeed that this is the very Christ? …The officers answered, Never man spoke like this man.

When His enemies were seeking to kill Him, our Master, the Lord Jesus Christ did not cower and suppress the truth, but He spoke all the more boldly. Thanks for stopping by and thanks for praying,

Previous Article Third Anniversary and Kneehigh Museum Ribbon Cutting—at the Creation Museum on Friday Next Article Why is AiG Relevant?