Here is a copy of a new release that our publicist distributed yesterday to media outlets throughout the USA:

Having recently passed the millionth visitor mark, AiG’s world-renown Creation Museum will celebrate its third anniversary this Friday by dedicating several new children’s exhibits, which together make up the “Kneehigh Museum” within the existing museum.

Opened to the public on May 28, 2007, attendance ran so strong the first summer that the Creation Museum saw 250,000 guests by October—a number we hadn’t expected to see until the end of the first year. Despite a struggling economy, museum attendance has remained above 300,000 visitors a year, reaching the one millionth visitor milestone in less than three years, on April 26, 2010.

The new “Kneehigh Museum” children’s exhibits include child-friendly and interactive additions to existing displays. The first set of Kneehigh exhibits appears in the Walk Through History portion of the museum. Children can explore Critter Canyon, where a brightly colored handprint invites them to investigate.

Other exhibits follow in the Dig-site room, where three new activities include a huge dinosaur bone (a hadrosaur tibia) that children can touch. They can then create a crayon rubbing to see a secret message appear, and find hidden fossils along the back wall of the room.

The Voyage of the Ark Room boasts another exciting interactive exhibit for children and adults alike.  A life-like Noah is sitting at his desk, ready to answer questions about the Flood. Children choose a question on the monitor and see the animatronic Noah come to life. Also, some special animatronic animals will be featured in cages, with information on how Noah could care for the animals, inside the Voyage of the Ark room.  In other places, special touch screen computers will enable children to play games, arrange the 7 C’s of Creation, build the Ark, and so on.

Make sure you visit the Creation Museum soon and experience the fantastic new exhibits.

Volunteers and AiG staff have now finished the refurbishing of Noah’s Café inside the museum.  For those who have been in the Café before, you will notice extensive changes—including our new menu signs featured in the photograph below: 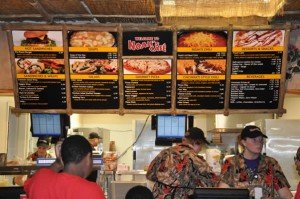 (Exodus 28:29)  And Aaron shall bear the names of the children of Israel in the breastplate of judgment upon his heart, when he goes in unto the holy place, for a memorial before the LORD continually.

Our purpose before we go into the holy place of prayer with prayer list in hand is for those names on that list to be on our heart to prevent a mechanical recitation. Thanks for stopping by and thanks for praying,