Today (Thursday) in the USA is the National Day of Prayer. The staff of Answers in Genesis gathered earlier today for prayer, breaking into small groups at 8:30am, and then throughout the day, they will set aside 15 minutes of their work day to pray for the nation and the AiG ministry. The Creation Museum guests visiting today will also be given the opportunity to pray in a special area set aside that is away from the hustle and bustle of the museum.

Here is the prayer list we distributed to the staff this morning, with the following specific prayer requests:

As part of the National Day of Prayer this year, there is a 7X7 campaign being featured as Christians pray for America and its leaders in the 7 centers of power: government, military, media, business, education, church, and family. Today, let’s pray for the following:

Pray for the following:

Last week, I did several media interviews, including one with the well-known writer and radio host John Lofton on his nationally syndicated radio program The American View. John is best-known for his political and social commentary (he wrote a regular column for the Washington Times for several years).  As a Christian, he often inserts biblical commentary into his writings and radio analysis.

John is known for being somewhat edgy, which popped up in the interview with me—you can listen to it below:

Here's a photo taken in my office of Pastor Lloyd Pulley and his wife Karen of Calvary Chapel Old Bridge in New Jersey: 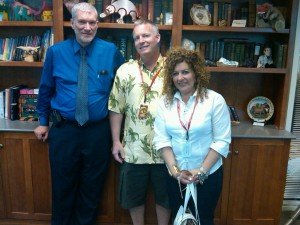 The church is not too far from New York City; I spoke at this church many years ago. Pastor Pulley told me that he will encourage his people to travel to Calvary Chapel of Philadelphia next month for our major AiG conference there. It was his first time to visit our Creation Museum.

For the next two days, I will be speaking at a large "Home School Book Fair" in Arlington, Texas (Dallas/Fort Worth), at the Arlington Convention Center.  I will be giving three presentations Friday and repeating them for Saturday. You can find out details from the AiG online calendar.

Make there an altar unto God

(Genesis 35:1)  And God said unto Jacob, Arise, go up to Bethel, and dwell there: and make there an altar unto God, that appeared unto you when thou fled from the face of Esau your brother.

The Lord Jesus Christ knows we need to find anchor in the stormy sea of troubles and He directs us to the anchor of spending time to just worship Him. Thanks for stopping by and thanks for praying,