For your interest, this is the press release AiG sent out to national media this week about our “I am not Ashamed” national campaign:

Since its launch on March 1, the first online video Bible, at www.iamnotashamed.org, has generated significant web and media traffic, illustrating Americans’ ongoing respect for the Bible as the Word of God.

With interest piqued by advertising that ran through March and most of April on Fox News Channel, foxnews.com and msnbc.com, and also a TV spot on “60 Minutes” nationwide, the iamnotashamed.org campaign video has been viewed more than 528,500 times on YouTube. The Web site has received nearly 194,000 visitors who have logged more than 5,800 posts and 560,000 page views, and the Facebook page has been “liked” by 23,800 new fans.

In addition, the campaign’s billboards have stirred great interest nationwide and potential donors are calling daily to support this worthwhile campaign, and many billboards are going up in major markets around the country (especially in Georgia). The billboards are similar to the ads which ran in USA Today early in the campaign, beginning with the phrase “The Bible speaks for itself,” and quoting verses which apply to issues of the day, from abortion to marriage to the place of Christian faith in the public sphere.

Everyone from college students and social media application developers to truck drivers and local church groups and newspapers have supported the campaign in a variety of ways.  A Christian student group at Long Beach State University in California has posted the www.iamnotashamed.org campaign video on its website, and an iPhone® app developer is including the iamnotashamed.org campaign logo in the advertising section of his app.

Thousands of followers have already tweeted and re-tweeted about the campaign, and it was the top search result for Google Video and YouTube searches for “online video Bible” on launch day. It has since continued to rank in the top ten.  The campaign also has continued to receive significant media coverage, including a recent article in the New York Times Media Decoder blog. Participants in the campaign have already uploaded more than 600 video clips (recording about 2,500 verses of the Bible), well on the way toward completing the online Bible. Leading Christian authors and speakers have contributed their own videos, including names such as: Dr. Al Mohler, radio commentator and president of Southern Seminary; author and broadcaster Joni Eareckson Tada; and the pastor of Moody Church in Chicago, Dr. Erwin Lutzer.

Visitors to the website quickly discovered that Answers in Genesis (AiG) is the organization behind the campaign, leading to increased traffic and discussion on its other online social media outlets.  In addition, the “I Am Not Ashamed” T-shirt quickly became one of the top-selling items in the group’s online store, out of hundreds of resources. Several people wore the shirts as they raced this past weekend in Cincinnati’s annual Flying Pig Marathon, a popular 5K/10K/marathon event to raise money for local charities.

“We are pleased, but not surprised, by the overwhelming positive response to this campaign, as we believe that the public, by and large, has a great respect for the Bible as God’s Word,” said AiG president Ken Ham (who videotaped the first few verses of Genesis for this online Bible). “We continue to be excited about how well people are responding, and look forward to having the entire video Bible completed soon.

“It is our hope that the attention this campaign is receiving will be an encouragement for Americans to return to the Bible as the authority for our lives,” Ham continued. “We want this campaign to be for everyone, and to have it stand as a reminder for where our nation’s values and history are based.”

The theme for the campaign is “I am not ashamed of the Word of God” (2 Timothy 2:15; Romans 1:16). The focus is on the authority of the Bible, which speaks for itself. The campaign highlights the mutual respect and appreciation that the large majority of the public has for the Bible as the Word of God. Participants film themselves reading portions of Scripture from the NASB version of the Bible, and then upload the clips to the online video Bible.  More information and instructions for participating are available online at  www.iamnotashamed.org.

To commemorate the Day of Prayer yesterday across America, our AiG and museum staff gathered in one of the museum meeting rooms to start Thursday’s work day in prayer, and we broke up into small prayer groups. Then throughout the day, staff—in 15 minute increments—went out to one of the pavilions in our gardens and prayed for the nation, as well as for AiG’s outreaches that God would use them to help bring revival to the land.

Here are three photos of the day: 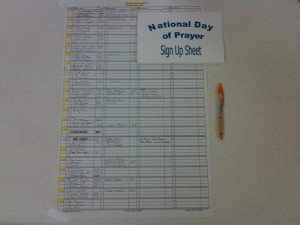 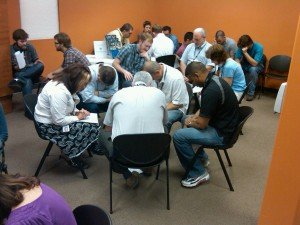 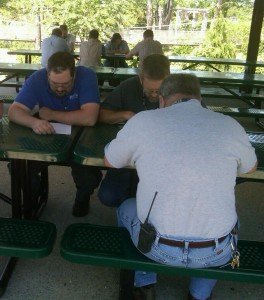 God did send me …

(Gen 45:8)  For God did send me before you to preserve life.  So now it was not you that sent me hither, but God: and he hath made me a father to Pharaoh, and lord of all his house, and a ruler throughout all the land of Egypt.

The Lord Jesus Christ uses difficulties to send us to the lost to preserve their lives as we preach thegospel to them & see them respond to its life-giving message. Thanks for stopping by and thanks for praying,