AiG’s Mike Riddle returned from the UK last week after a speaking tour as part of the outreach of AiG UK. As a veteran and a Marine, he wanted to visit nearby Normandy (a province in France) to pay tribute to the several thousands of Americans who lost their lives on the beaches of Normandy in June 1944.

Here is a summary of Mike’s report:

My wife, Lesley, and I returned from a fruitful tour of the UK, organized by Paul Taylor, Senior Speaker, AiG-UK. During the tour I spoke in churches in England, Scotland and Northern Ireland. We began our trip, however, in Normandy, France where we visited the Gold, Omaha, and Utah beaches where troops landed on D-Day, June 6th, 1944. We also went to the American Cemetery where 9,387 soldiers killed in WWII are buried. It was a fitting memorial for those who paid a great price for the freedoms we have today. 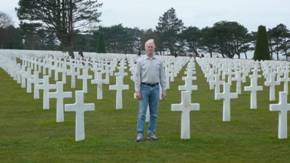 We then took a high speed train (150 mph) from Paris to London under the English Channel where Paul met us. He served as our driver, protector, and guide. We spent a day in London at the British Museum and then drove to the south where I began my speaking tour.

I spoke in nine locations throughout the UK.  (See a photo of one of the churches below—KingsChurch in Ringwood Hampshire, England.) I have been adding a series of articles which have been posted on my personal blog (located on our special Outreach web page about the many churches we spoke in and sites we saw during the tour. 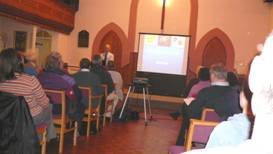 This is also a reminder to you that all the AiG speakers now have blogs on the special AiG Outreach site.

We do not well…we hold our peace

(2Kings 7:9)  Then they said one to another, We do not well: this day is a day of good tidings, and we hold our peace.

Once saved we think on what was our former and the present doom for the lost and we conclude that we cannot hold our peace we must preach the Gospel. Thanks for stopping by and thanks for praying,