Missed Them by That Much

It’s happened again: visitors coming to the Creation Museum and asking if I’m in town, and then hearing that I flew out that morning to speak in their area back home for a seminar—in fact, speaking at the church they used to attend!  Justin and Bridget Ryan from Upland, California packed up their five children and started out on the trip of a lifetime.  Their goal: to visit all fifty states, with the Creation Museum as the high point of their journey. Driving a 38-foot motor home, the Ryans have enjoyed their road trip (Carlsbad Caverns in New Mexico was a favorite, and they knew how to counter the evolution teaching there)—even though it’s a little cramped in the motor home, they informed us. 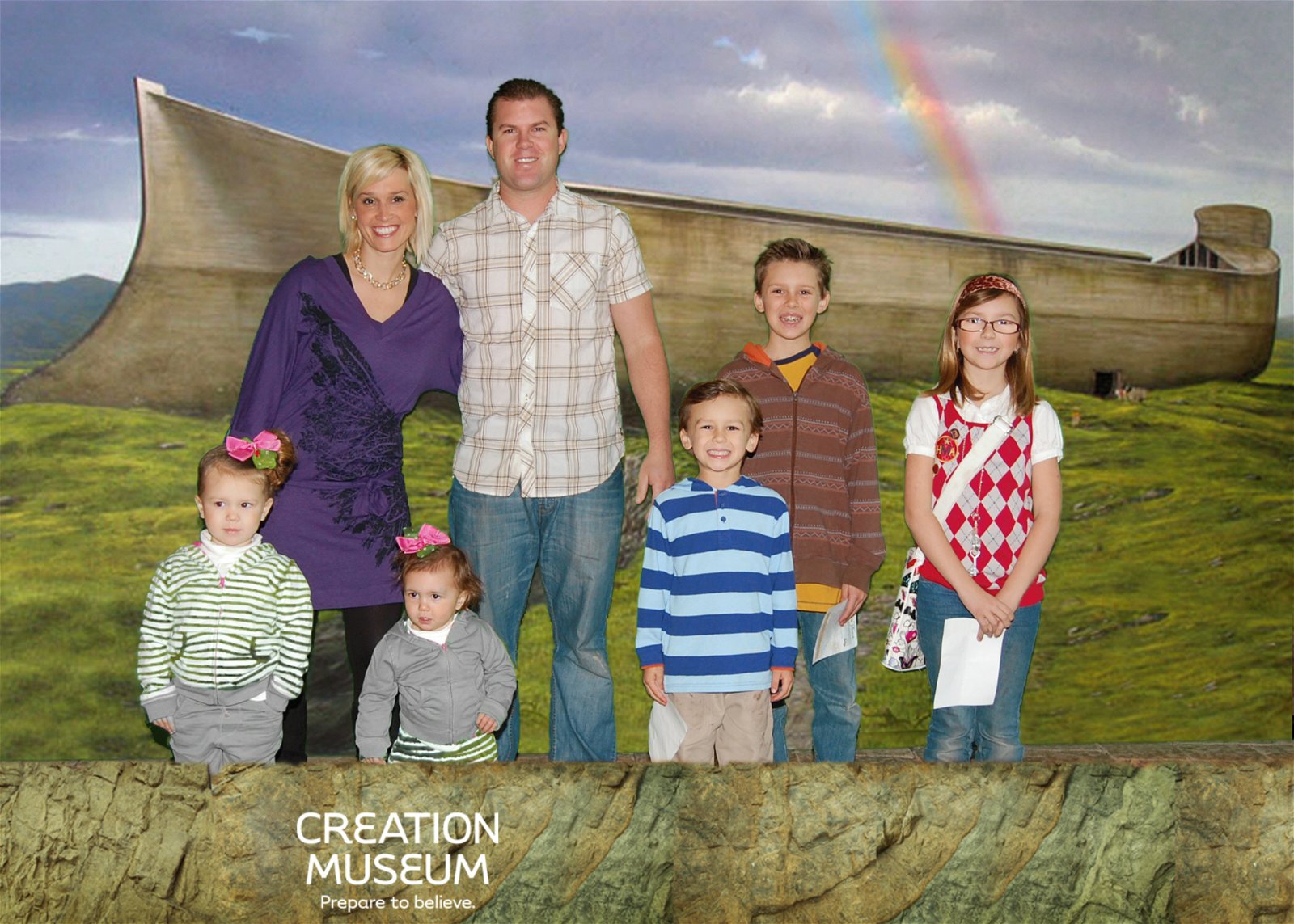 How did this whole journey begin? They heard me speak at Calvary Chapel of Chino Hills (Calif.) two years ago at an AiG conference, and there they bought our book Raising Godly Children in an Ungodly World.  Bridget says it changed her whole focus on education, and it was the reason they decided to home school. Their oldest son, Austin (10), who was so happy to be at the Creation Museum, now has the goal of becoming a creation scientist (he likes to study dinosaurs)—and says that we are his role models.

Justin actually runs his pool maintenance business from the road (he has people back home helping him!) and assists with the home-schooling duties. He and Bridget met at Calvary Chapel Oceanside, where I spoke last night and where Dr. Jason Lisle was speaking this morning. In a few weeks, I will be back to speak at their current church, Calvary Chapel of Chino Hills, but they will miss me again! Their trip around America will still be going on!

The following is the text of the Press Release we sent out this past week in regard to the new movie called Creation, which is really a movie about Darwin, and in particular portraying Darwin’s life and struggles. It stars atheist actor Paul Bettany.  Actually, using a quote from the film itself, I think a better title for the movie might be “Killing God.”  Here is an excerpt from our release:

WHAT:           The British film, “Creation,” which opened in the U.K. and other parts of the world last fall as part of the “Year of Darwin” celebrations (his 200th birthday), has found U.S. distribution and opens in limited theaters this past Friday. Paul Bettany stars as the famed evolutionist, opposite his real-life wife Jennifer Connelly.  Interestingly, Bettany toured theCreation Museum last summer alongside British writer A.A. Gill, snapping photos for use in Gill’s [scathing mocking] article appearing in the just-released issue of “Vanity Fair.”

DETAILS:      Charles Darwin is credited with being the popularizer of evolutionary thought, based on the book he released “On the Origin of Species,” on Nov. 24, 150 years ago. The loss of Darwin’s daughter and his wife’s faith were both important influences on his life, which forms much of the basis for the film’s dramatic interpretation. While creationists agree with Darwin’s thoughts regarding natural selection and adaptations to aid survival within species, it is his ideas regarding species-to-species change that they refute. While Darwin is not singularly responsible for social ills such as racism and other results of the devaluation of human life, his ideas have been used to justify some of the most horrific examples of man’s inhumanity to man that we have seen in the past 150 years. The movie biography may be rather boring to many, but what it does do is really portray the fact that Darwin’s ideas certainly undermined belief in God.  One quote in the movie, “you’ve killed God, Sir” makes that very clear.  Also portrayed is that belief in atheistic evolution would mean no love, no honor, only brute survival as Darwin explains to his daughter in the part of the movie.

This drama won’t be a blockbuster, though the secular humanists are really pushing for people to see it—and of course they do so because they want to promote anything that supports their atheistic philosophy and undermines Christianity.  I really doubt the movie will have a big run in the theatres.

Another Plea About Haiti

We’ve mentioned the tragedy of the Haitian earthquake a few times on the web since the quake struck last week—which killed tens of thousands of people (and more bodies are being pulled out every day)—and linked to the Christian relief agency Food for the Hungry so that people could make a donation. We wanted to bring the Haitian relief efforts to your attention again. This time, listen to Dr. Frank Wright, president of the National Religious Broadcasters (AiG is a member) as he suggests ways to contribute to the relief work. Listen at content.nrb.org/audio/haiti/Haiti-Relief-PSA_60sec_Frank-Wright_Wmusic.mp3

Dr. Wright is a good friend of the ministry – see blogs.answersingenesis.org/blogs/ken-ham/2009/12/14/a-president-from-d-c-visits-aig/