Can University of Minnesota Professors’ Research Be Trusted?

The answer: certainly not—if they are like the atheist professor who led a group of atheists/agnostics through the Creation Museum recently. It is amazing the university’s board of regents would tolerate such poor research and such vile language from someone who is paid by tax dollars to supposedly educate (instead of brainwashing in blatantly anti-Christian blasphemous propaganda).

Someone sent me a copy of what he put on his recent blog critiquing the Creation Museum—of course, he had likely already “written” this (in his mind) before he even came! It was obvious from all the previous things he’d written that he was coming to scoff and call what we do an “abomination.”

And this professor seems to have a fixation on me—yet, our own full-time PhD scientists and many other scientists who work in the secular world provided the research for the museum scripts. But, then again, he wouldn’t want to acknowledge that people with better qualifications than he holds (qualifications obtained from secular universities, including PhDs from Ivy League schools like Harvard and Brown) were behind the Creation Museum teaching. This man is obviously very angry at God and relishes in mocking Christianity—spending a lot of his time fighting against Someone he doesn’t believe exists!

In his latest piece of propaganda, he shows clearly how bad a researcher/observer he really is. (Would you really want a professor like this—someone claiming he was educating students?) It is amazing that the University of Minnesota allows such a bad researcher to be on their faculty.

For instance he claims concerning our exhibit on the Tower of Babel:

With complete seriousness and no awareness of the historical abuses to which this idea has been put, they were promoting the Hamite theory of racial origins, that ugly idea that all races stemmed from the children of Noah, and that black people in particular were the cursed offspring of Ham.

I publicly challenge this professor to document with photographs and actual scripts that the Creation Museum teaches “that black people in particular were the cursed offspring of Ham”!! Not only do we not teach such an absurd idea (that sadly has been used by some to promote racism and prejudice against dark skinned people), we teach against it. In our book Darwin’s Plantation [now titled One Race One Blood], I particularly deal with this issue, pointing out that dark skinned people (“black” people) are certainly not “the cursed offspring of Ham.”

In fact, it is only one of Ham’s sons who was cursed (and not Ham himself)—the younger son Canaan—who gave rise to the Canaanites and people of Sodom and Gomorrah—judged for their sexual immorality. And this “curse” of Canaan has absolutely nothing to do with skin shade! We do not teach that “all races stemmed from the children of Noah”—as we explain, there is only one race biologically of human beings (as we are all descendants of two people, Adam and Eve)—different people groups, but not different “races.”

When we speak or write on this topic, we usually will say things like “so-called races” or put “races” in quotes to make the point. I always urge people not to use this term (because of how it has been used with evolutionary connotations), but use the term people groups.

The “Confusion” section (dealing the Tower of Babel) in the Creation Museum teaches that all the people groups on earth today are descendants of the three sons of Noah—obviously so, as Noah’s family was the only family to survive the Flood.

Anyhow—such is typical of the rest of what this professor spews forth! Perhaps, as an atheist, he thinks a person can lie as much as one wants, as there is no basis for such a thing as absolute truth in his worldview. The reason I decided to even comment on this nonsense espoused by this professor is that I wouldn’t want to see this false information about what the Creation Museum supposedly teaches being read by dark-skinned people, or anyone for that matter, and getting the idea that AiG teaches such nonsense—when in fact, we teach against it!

Ironically, as this atheist was falsely accusing us of racism, I was in Seattle speaking in the church led by a black pastor—and a good friend of our ministry. See the photo of me and Pastor Hutcherson a former NFL football player. And I spoke Sunday evening against racism! (By the way, a few years ago I spoke with Pastor Hutcherson at an anti-racism conference.) 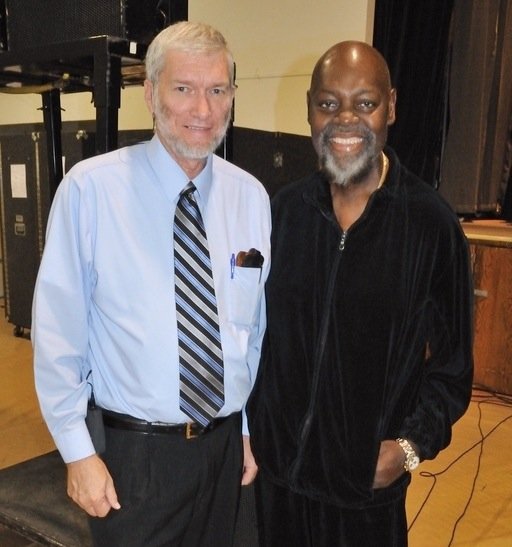 The absurd claim of racism in our museum by the atheist above is simply outrageous. A major lecture by me (and Carl Kerby), a DVD, book, and a special website (www.OneHumanRace.com) are all designed to fight racism. What he writes is the exact opposite of what we teach and practice! It's akin to someone claiming that our museum is in favor of Darwinian evolution—that’s how false his accusation is! This atheist simply can't do basic research—he stands in the middle of the museum and “reads” our anti-racism displays (that we’re all of one blood—Acts 17 and genetics supports this), and he writes that we’re racists. How blind can one be?

Well, it was a thrill on Sunday to speak five times (three morning services and two evening sessions) at Pastor Hutcherson’s Antioch Bible Church in Kirkland, Washington (near Seattle).

I appreciate my friend “Hutch” (as people affectionately refer to him) inviting me to come and speak to his congregation. Here is a photo of Hutch and me : 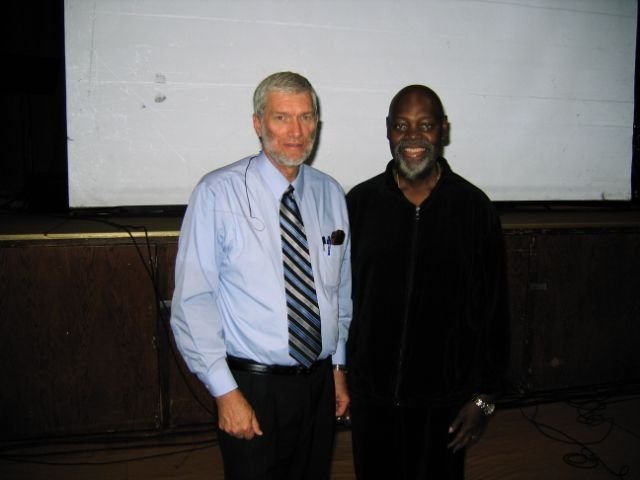 There was a phenomenal response from the people: we had run out of many resources by the end of the second service! Because the auditorium didn’t have a lobby, we had to put the tables of resources outside under a tent (as there was some light rain—not really a surprise for Seattle!) where people could line up to obtain them: 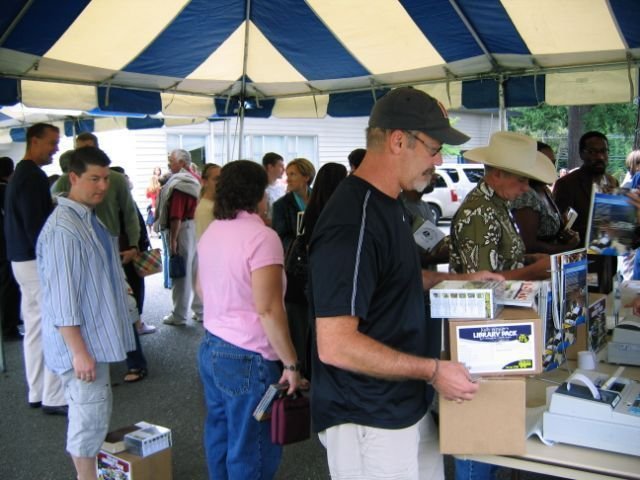 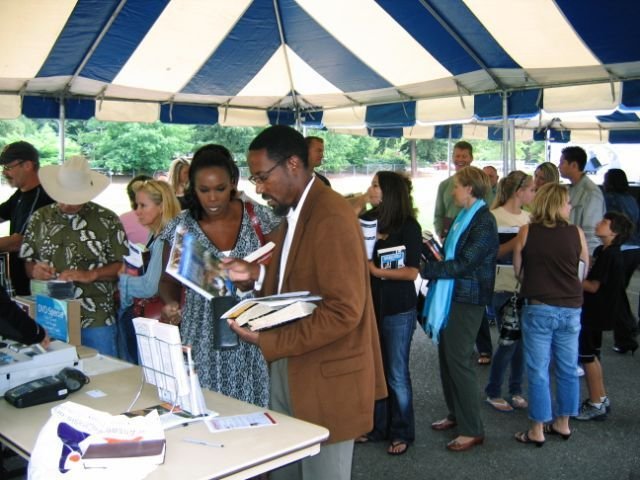 And we had some great enthusiastic volunteers helping us: 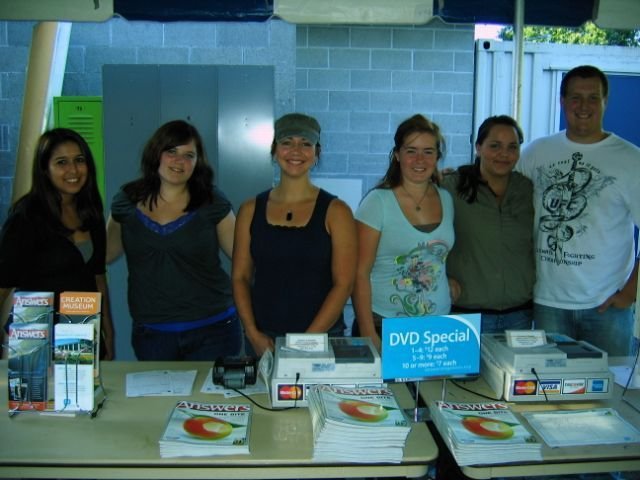 On Sunday evening, I met a few skeptics who turned up to hear me speak. During the break I had an interesting conversation with a number of them—including one man who was an ardent evolutionist and told me I didn’t know what I was talking about. I asked him to defend his belief in evolution and give me his best arguments—but the best he could do was to say he could get a book for me to read. Typical of so many people, he didn’t know why he believed what he did—couldn’t defend what he believed—but he knew evolution was right, as he read it in a book and heard secular scientists teach it!!

One of the sessions I spoke on was about the origin of so-called “races.” Not only did I explain how the different people groups (not “races”) came about after the Tower of Babel, but explained that all humans basically have the same skin color—just varying amounts of it. Ironically (when you read the first item on this blog entry), I included a section telling people they had to get rid of the false notion that Ham was cursed and that dark-skinned people were supposedly the result of this curse. I told them this idea was not in the Bible and was absurd! Ham’s son was cursed—but that had nothing to do with skin color.

(Romans 5:3–5) tribulation works patience; And patience, experience; and experience, hope: And hope makes not ashamed; because the love of God is shed abroad in our hearts by the Holy Ghost which is given unto us.

The experiences we have had of witnessing lost souls saved through faith in the Lord Jesus Christ works hope in us for our other lost friends to be saved.

Previous Article Encouragement Next Article What Happened to . . . Journalism 101?