Many of us remember President Reagan's call in the 1980s for the Berlin Wall to come down. Many of you may also remember seeing the Expelled movie recently. In that powerful documentary, the Berlin Wall is likened to the Wall the secular academics are building in the culture to censor information from the public so that people won’t question evolution. The film also documented instances of people who lost their jobs or were otherwise persecuted because they dared to question evolution or even allow someone to discuss the possibility of intelligent design behind life. The movie called for that wall of academic snobbery and censorship to be brought down.

Well in a recent blog I shared with you about an advertisement the American Humanist Association placed in the presidential inauguration issue of the Washington Post in which they congratulated President Obama and quoted from him saying America is not a Christian nation.

In the same newspaper issue, the Freedom From Religion Foundation placed an advertisement with the headline, “Mr. President, Rebuild That Wall.” 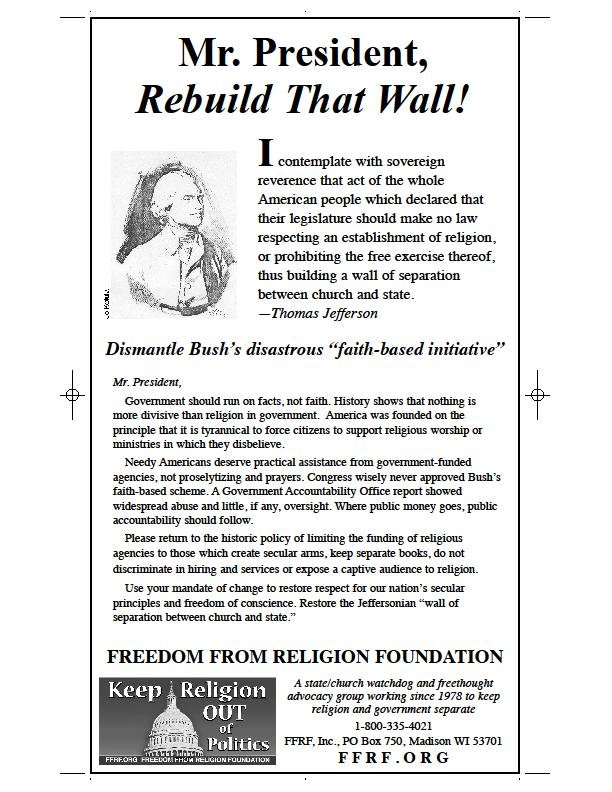 I trust the American public is awake enough to recognize the utter hypocrisy and inconsistencies in this advertisement that calls for President Obama to “Dismantle Bush’s disastrous ‘faith-based initiative.’”

They state: “America was founded on the principle that it is tyrannical to force citizens to support religious worship or ministries in which they disbelieve.” This group wants “freedom from religion.” However, the founding fathers of this nation did not advocate “freedom from religion,” but “freedom of religion.” They came from a nation where they were persecuted and there was no real freedom of religion, as the state religion was being forced on people.

Think about it: the Freedom From Religion Foundation wants to FORCE on this country an atheistic religion. They don’t want freedom OF religion, and they don’t want freedom from religion (there is no such thing—what they really want is freedom from the Christian religion!). America was founded by people who were primarily Christians or at least built their thinking on the Bible. This can be seen in Washington, D.C ., with Bible/Christian references on numerous public buildings, a sculpture of Moses facing the Speaker of the House , and so on.

This group wants secularism to be the state religion. The secularists have by and large already succeeded in making secularism the religion in the public schools. When they threw God out of the public school science classes, they didn’t throw religion out—they threw Christianity out. Now students are taught that the whole of the universe—all life including humans—can be explained by natural processes. This is the religion of naturalism or atheism.

And remember, the Bible makes it clear there is no such thing as neutrality—one is either for Christ or against—one walks in light or darkness.

What is happening to America is that the secularists, claiming to be neutral, are trying to force their anti-God religion on the American public. Oh, they might say you can believe in God in your home or church, but they mock those who believe in God as Creator. They don’t care if you believe such a foolish thing from their perspective, as long as you don’t try to tell anyone else about God and try to get them to see the truth of God’s Word.

It’s about time God’s people stood up to this fierce attack on Christianity. Of course, what the secularists hate is Christians telling them they are sinners in need of salvation, and that there is ONLY ONE way to heaven—through Jesus Christ and what He did on the Cross.

Pray for this nation!

The Modesto Bee is the name of the newspaper in Modesto (located in central California, east of San Francisco)—the city I will be speaking in today and tomorrow. The newspaper reporter did a great job in communicating my answers to her questions (she interviewed me by phone this past week) about the creation/evolution issues.

When Australian-born Ken Ham, founder and president of Answers in Genesis, visited Charles Darwin's home in England in 2006, he found many things of interest. "What Darwin observed, we would agree with," said Ham, whose biblical message of creation is heard weekly on 900 radio stations worldwide. "He observed that species change. We would agree with that. He talked about natural selection. We would agree with that. You can take dogs and produce dingos, wolves, all kinds of dogs. But natural selection doesn't mean molecules-to-man evolution…Ham will bring his "Answers in Genesis" conference to Calvary Chapel Modesto on Sunday and Monday. He said Christians and non-Christians alike will gain information from the conference to help them "sort out what people really believe."’

You can read the entire article at: www.modbee.com/life/faithvalues/story/583399.html

You can also find out the details of the meetings I will be speaking at on AiG’s website event calendar.