We are thrilled to let you know that 11,000 people attended our special outdoor “Road to Bethlehem” Christmas program (with a live Nativity)—over 11 evenings. Inside the museum there were additional special Christmas activities that went on, which drew over 24,000 visitors in 23 days. Praise God!

While I rejoice in reading the museum’s highly positive reports, I am still constantly reminded that there are many people who oppose the Answers in Genesis ministry. Now, that might not be surprising, for we are a Bible-proclaiming ministry in a secular world, but you might be surprised to learn that Answers in Genesis actually receives most of its criticism from Christians—not secular evolutionists. The ratio might be something like 3:1 in the emails and letters we receive.

To illustrate this, the email below (received recently) reveals just that. It’s followed by a reply to this Christian evolutionist from our CCO, Mark Looy.

Stop trying to tell kids that evolution is wrong to believe in strictly based off of your emotions. God created humans with brains to find the answers through scientific research and advanced methods of study. Billy Graham himself said that there is no conflict between the theory of evolution and the bible. Read up and research before you release any more videos or books about your thoughts on this matter.

The tactic you used is known as elephant hurling—broad generalizations without specifics. Name your best evidence for evolution, and why (I ask as a former evolutionist myself).

On the contrary, our museum and other outreaches are being used by God to bring many people to Him—see yesterday's blog as one example.

You write that we believe that accepting evolution is the end of people’s faith—where did you ever find that comment on our website (or other place)? Christians can believe in evolution and still be devout—and lovers of Him.

Also, our full-time science faculty—with earned doctorates in fields like astronomy, geology, biology (one from an Ivy League school), and medicine—are not relying on their emotions in their research and conclusions (e.g., http://www.answersingenesis.org/arj).

There is no disservice to the Lord when you present His Word as accurate and authoritative from its very first verse. Genesis is not poetry or allegory—it’s written as historical narrative, and that’s how Christians should take it, as they would the Resurrection.

I hope you can spend more time on our website.

Mark Looy CCO Of course, we could have written pages in response to his sweeping generalizations, but with so many emails pouring into our offices, we can’t write lengthy replies. Most of the time we can point enquirers to articles on our website that go into depth on the questions they have.

Jason did send a reply, but it contained more sweeping statements with no specific “evidence” for molecules-to-man evolution, but it did have something of an apology for sounding angry in his first email.

I came across a bizarre comment made by a movie critic at the Los Angeles Daily News newspaper. For 2008, he wrote that he was “surprised” how “intellectually rigorous and sometimes even nuanced” movies (his words) like Frost/Nixon and W. were. But what other film does he add to this list of “intellectually rigorous” films of 2008? Religulous! He added that such films “collectively refused to be simplistic” about their subject matter.

Now, this “Religulous” is a so-called “documentary” that mocked the world’s major religions, and its host Bill Maher ambushed several organizations (including our Creation Museum, just months before it opened) in order to get some interviews. When he asked Christians to defend their faith, he primarily targeted laypeople (and some eccentric church leaders) with his barbed questions, even stopping tourists at a Christian theme park in Florida and truck drivers at a truckers’ chapel to get their comments on camera. “Intellectually rigorous”? “Nuanced”? This critic saw a different movie than I did.

From Broom to Management

As well as the sacrificial effort the AiG staff put into the Christmas program, it is so thrilling to have staff who will do whatever it takes in this ministry—as they know the whole reason for AiG’s existence is to reach people with the saving gospel. Recently a guest made a point of telling us that he was impressed with the cleanliness of the museum, but went further to say that he was particularly impressed when he saw a man in a suit jacket scraping gum off the floor in the main hall.

We are impressed, too. The guest was referring to our own Dan Mangus, who recently took on the position of overseeing museum operations. Even though he holds a very responsible position at AiG, you’ll still see him helping out with whatever needs to be done—even if that means scraping gum off the floor. Thanks, Dan. 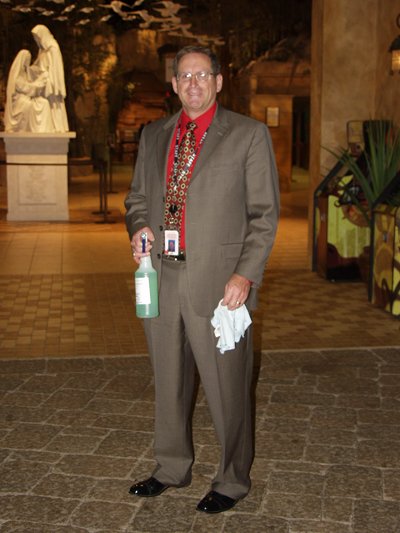 (Luke 9:1) Then he called his twelve disciples together, and gave them power and authority over all devils, and to cure diseases.

When the Lord Jesus Christ calls us to preach His gospel, He also gives us the power to overcome obstacles that stand in the way. Thanks for stopping by and thanks for praying,