Our video production team was very busy last week, setting up and then videotaping five new lectures by several of our popular speakers. The Creation Museum’s Special Effects Theater was transformed into a soundstage (with a new, modern-looking background), and museum visitors were able to sit in on “live” shootings that covered a variety of subjects.

Our video and audio department is led by Ben Wilt, a young man who has been with us for 5 years now, which hardly seems possible! He and his team work together extremely well, a true testimony to the working of the Holy Spirit, as these gentlemen are using their talents in service to our Lord!

The DVDs will be released as more graphics and finishing touches are added and as post-production is completed throughout 2009. The hard working crew includes Ben Wilt, Ryan Vogel, Derrik Suter, Jeff Simon, Aaren Neely, and Doug Nelson. Great job guys!

Here is a photo of the set: 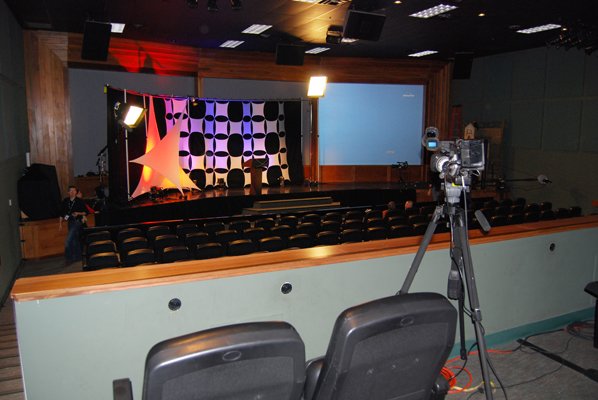 Here is a photo of Dr. Terry Mortenson and AV Director Ben Wilt getting set up for the filming. 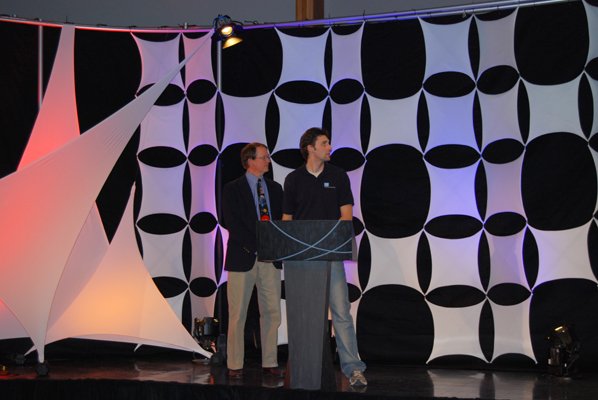 Music at the Museum

We’ve developed many great contacts with some wonderful people in our Cincinnati metropolitan area who have tremendous talents—from professional athletes to businessmen to musicians, and so on. Many of them introduce themselves to us when they visit the museum—or at our seminars.

A local musical family has visited our museum a few times, and they go to church with Tom Hill of our accounting office. It’s the Hilvert family, and the three children make up the Hilvert String Trio (with their mom sometimes providing a fourth instrument—the bass). Tom suggested that we invite them to perform for the AiG staff and also provide some special Christmas music. They did so last Thursday. In addition, we put up some lyrics on a screen for a singalong of Christmas carols. I wasn’t there (I’m in California right now), but I heard that the Hilvert children were wonderful. 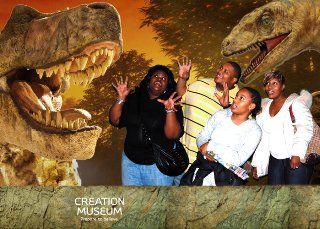 Here is a link where you can watch them play a piece by Dvorak. (Are you surprised I even know the name? Well, I’ve been dragged to a few Cincinnati Symphony performances and am now actually enjoying the experiences!):

We had a great turn out at the museum for the first two days of “Bethlehem’s Blessings.” About 1500 people braved the cold to come and visit the Creation Museum and the “Road to Bethlehem” and live nativity program.

AiG speaker Carl Kerby, who volunteered to act as a Roman soldier for this event, sent me the following report:

Two of the comments that stand out to me from the first night came from two grandfathers. The first grandfather spoke with me after they had been on the walk and expressed how thankful he was for everything.

He told me, “Everything was first class, from the costumes, to the message to the actors. But, I shouldn’t have expected anything other than that from you guys!” How encouraging that is to have a reputation of providing first-class service.

He continued with, “My grandchildren asked me about paying the taxes [on the ‘Road to Bethlehem’ on the museum’s grounds], and it gave me the opportunity to share with them more of the history of Christ’s birth, thank you.”

I have to admit I thanked him because that’s exactly what we’ve always tried to accomplish. Equipping Christians to share their faith more effectively and providing a facility that will serve as a “springboard” to evangelism.

The other grandfather expressed the same sentiment. His story is interesting for another reason. The first night he had his two sons and daughters-in-law with him. They spoke with me for about 15 minutes about how encouraged they were.

Well, tonight, amidst the hundreds of others, I look up and see him back again! This time he’s got his grandchildren with him! He shared with me how much he was moved the night before he had to bring more of his family! Praise God!

Another mother came up to me as I was leaving. She shared with me how this was her and her husband’s first time to the museum. They were so touched that they’re now bringing their four children next weekend when we do it again.

We had folks from Korea and China there tonight [Saturday] as well. I have to tell you, though, that the highlight for me was seeing so many young children there. I’d ask them where they going to, and they would respond with “To Bethlehem!” or as a couple of them said to me, “To see the baby Jesus!” Praise God we’re allowed to be involved in His work.”

(1 Chronicles 12:33) Of Zebulun, such as went forth to battle, expert in war, with all instruments of war, fifty thousand, which could keep rank: they were not of double heart.

Our obedience to God and expertise in spiritual warfare is destroyed by double heartedness of not being totally convinced of the power and love of the Lord Jesus Christ. Thanks for stopping by and thanks for praying,