In many ways, we are seeing an increasing hunger/demand for the AiG/Creation Museum ministry. More resources than ever are being ordered, many requests for ministry, tremendous numbers accessing the AiG websites, phenomenal attendances at conferences and so on.

Yesterday, nearly 4000 guests visited the Creation Museum--that was a BUSY day. The numbers even beat the same Saturday last year when the museum was only recently opened! The attendance at the museum for the second year of operation, despite the economy, has been thrilling! People are hungry for the message. 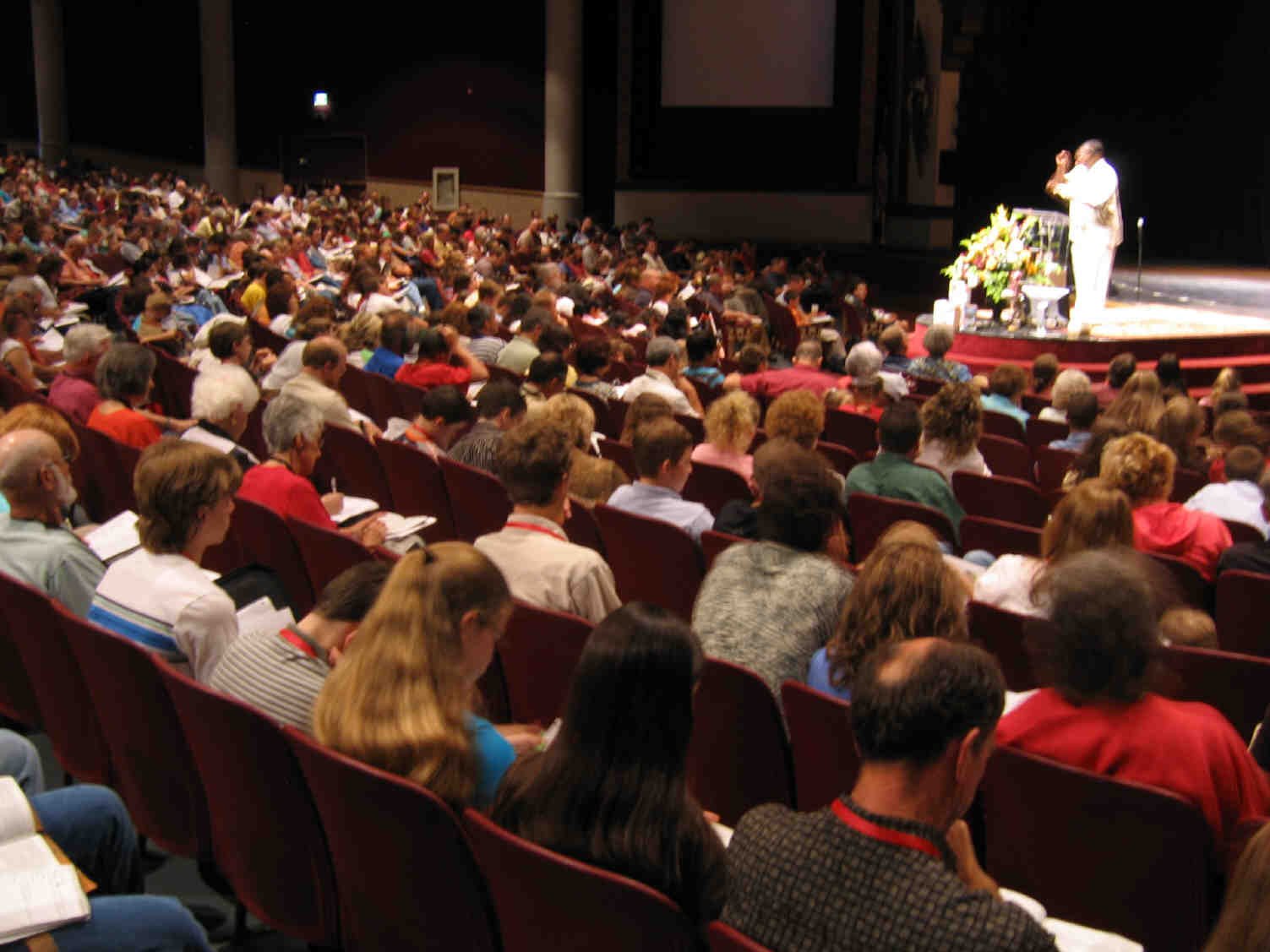 Dr. Voddie Baucham speaking to the crowd! His expositional apologetic approach was loved by all. 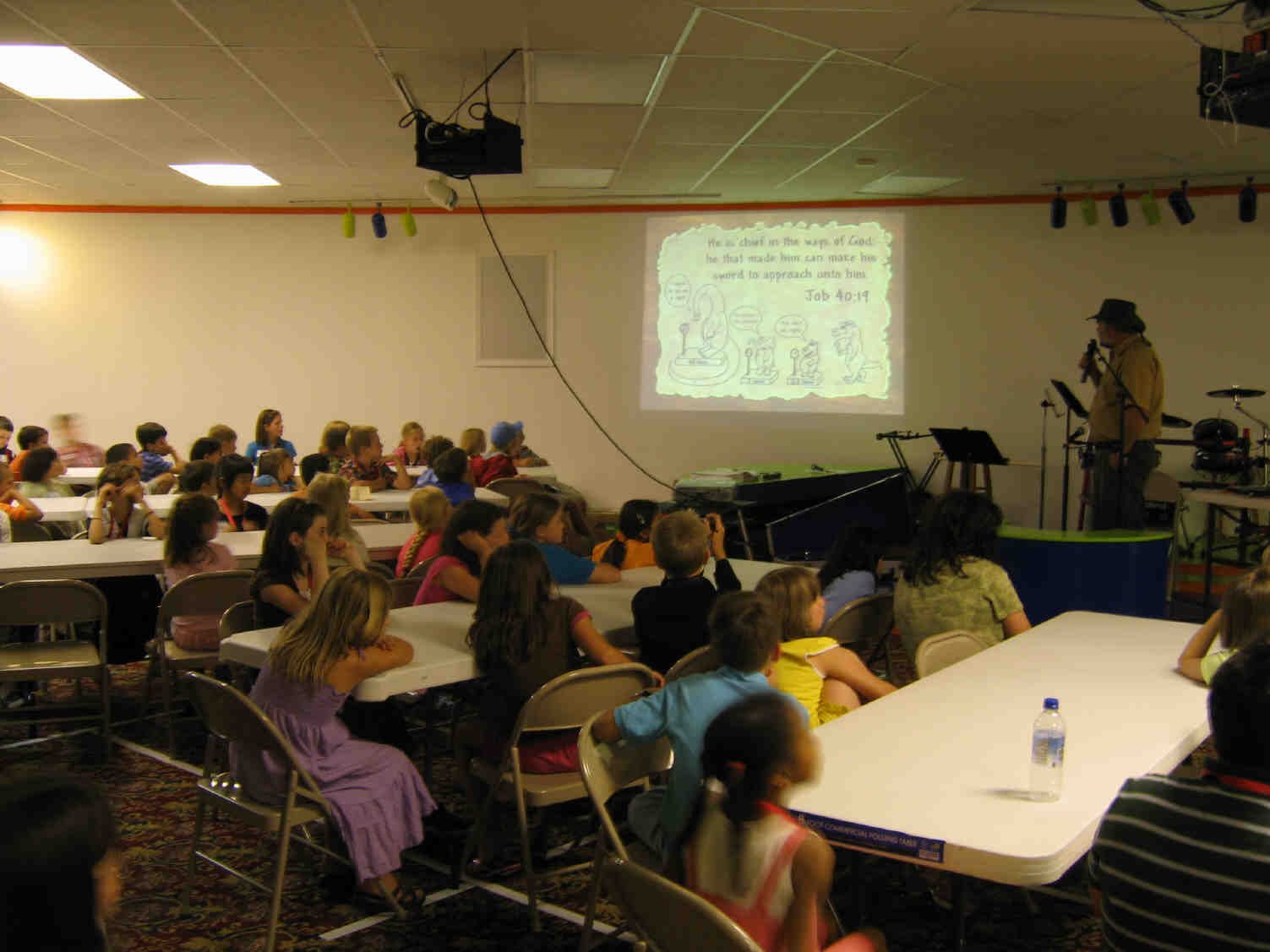 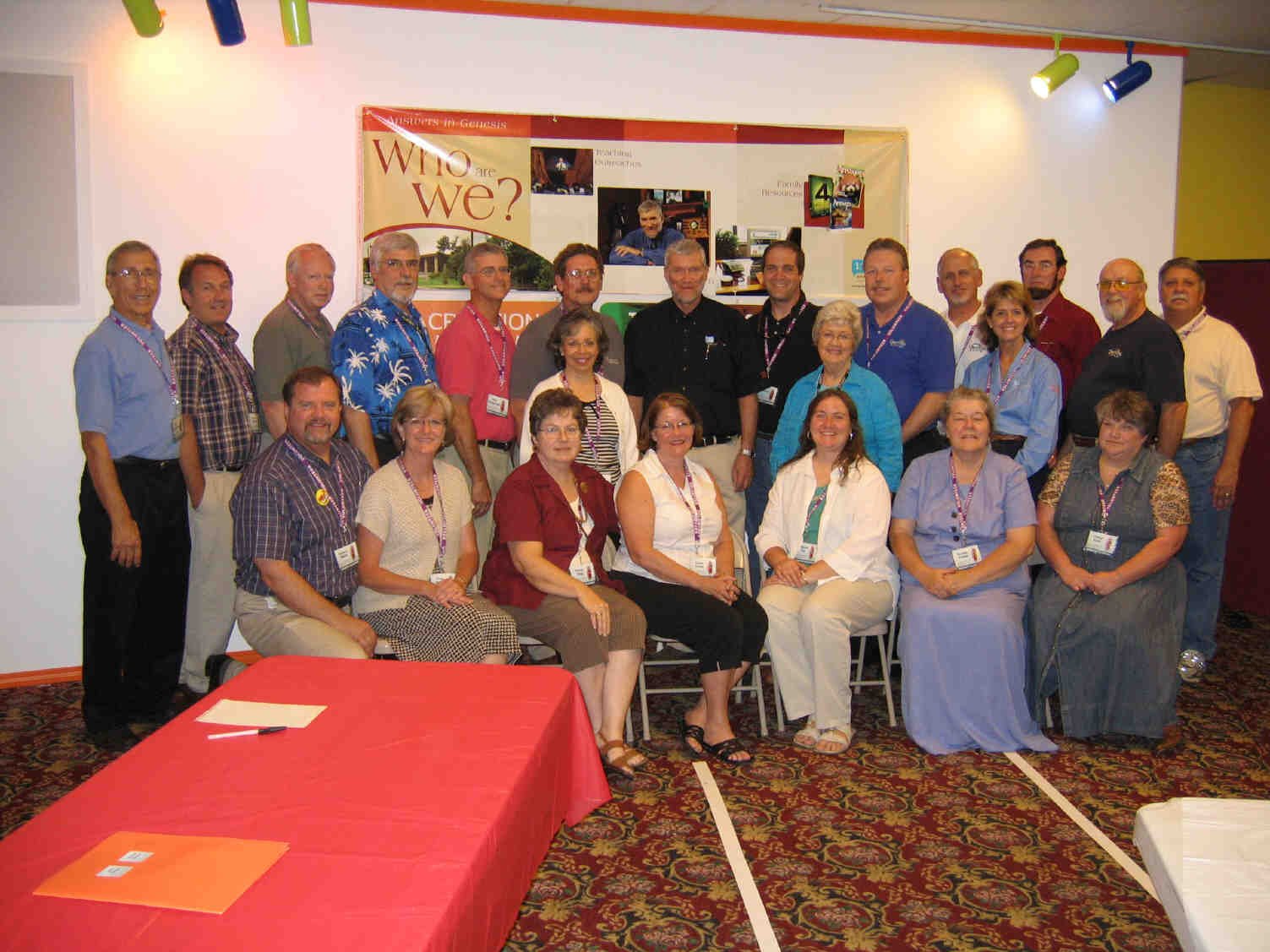 Many of our volunteers who spent time being trained as Video Conference Volunteers. AiG's video conference ministry is growing rapidly. Praise the Lord for those who volunteer their time to get the vital AiG creation/gospel message out to their communities. And praise the Lord for Bob and Jan Thompson who head up this important ministry.

Carl Kerby gave the final keynote address at Branson as I had to leave early to speak to a special group who had rented out the museum for Friday evening. (More about that group in a future blog.)

Buddy received a standing ovation after his concert Friday night, and when he was walking back to the workshop, kids started getting out of their seats and giving Buddy a hug as he went by. Children really love him.

Many of you may remember the “Evolution Sunday” project that now occurs each year, when certain churches sign up to support the teaching of evolution, and dedicate this Sunday (a date chosen in February close to Darwin’s birthday) to teaching evolution in their churches.

Part of this project involves a letter called “The Clergy Letter Project,” in which clergy are encouraged to sign a letter supporting the teaching of evolution. The list of clergy signing such a letter appears on a website. Recently, after the United Methodist General Conference overwhelmingly endorsed participation in “The Clergy Letter,” the organizer of this letter (whom I have spoken with on radio but have never been able to find out what his beliefs are concerning Christianity---I suspect he is very anti-Christian) sent a copy to United Methodist clergy urging them to sign “The Clergy Letter” and to participate in “Evolution Sunday.”

This is what was sent to the churches (and I have a few comments in italics):

I am writing to you in the hopes that you will join together with thousands of your fellow clergy members. Please allow me to introduce myself and explain. I am Michael Zimmerman and, in addition to being the Dean of the College of Liberal Arts and Sciences at Butler University in Indianapolis, I am the founder of an organization called The Clergy Letter Project (www.evolutionsunday.org <http://www.evolutionsunday.org/> ). The Clergy Letter Project was created to demonstrate that religion and science can be compatible and to offer an alternative voice to those who claim that modern science must be refuted if a religious life is to be lived.

This is cleverly written to make out that people like ourselves at AiG are against modern science—which is simply not true! We love science—and we have a number of Ph.D. scientists in employ at AiG. When most people use the term “modern science,” they are thinking of empirical science (involving observation, repeatability, etc.) that built our modern technology. Biblical creationists study such science and show that modern science actually confirms the Genesis account of creation. Michael Zimmerman is grossly misleading people in the way he makes his statement about modern science.

This illustrates the sad state of the church. In doing this, this denomination has shaken its fist at God and told the Creator of the Universe they don’t believe what He had written in his Word in Genesis.

The Clergy Letter Project has two major initiatives. First, we have collected more than 11,300 signatures from Christian clergy (including more than 40 active and retired United Methodist Bishops) on a simple two paragraph letter explaining exactly these points. You can read The Letter on our web page (http://www.butler.edu/clergyproject/religion_science_collaboration.htm) and I’ve reproduced it below my signature block as well. Second, we have an annual Evolution Weekend event in which hundreds of congregations from around the world participate by doing something to elevate the dialogue about the compatibility of religion and science. Last year’s event had 814 congregations from every state and five countries participating. Participation ranges from a sermon to a lunch time discussion and from an invited speaker to an adult education class. You can look at the list of participants at (www.evolutionweekend.org <http://www.evolutionweekend.org/> ). Our web pages also list more than 100 sermons that have been delivered on the topic.

If you look at the list of clergy who signed this letter, you will see that many are from denominations that deny a number of basics of the Christian faith—quite a number of them could not be described as “Christian”as the Bible would describe Christian.

I very much hope that you are comfortable signing The Clergy Letter and demonstrating the compatibility of religion and science. And, I hope you consider participating in Evolution Weekend 2009.

To add your signature to The Clergy Letter and/or to express an interest in participating in Evolution Weekend 2009 (13-15 February 2009), simply contact me ([email protected]) by responding to this e-mail. Please tell me the city and state you would like listed with your name. Additionally, please share information about The Clergy Letter Project with friends and colleagues who might also want to participate but who may not yet have heard of us.

Thank you so very much for considering this request. If you have any questions, please do not hesitate to contact me.

Michael Zimmerman
Office of the Dean
College of Liberal Arts and Sciences
Butler University
Indianapolis, IN 46208

Within the community of Christian believers there are areas of dispute and disagreement, including the proper way to interpret Holy Scripture. While virtually all Christians take the Bible seriously and hold it to be authoritative in matters of faith and practice, the overwhelming majority do not read the Bible literally, as they would a science textbook. Many of the beloved stories found in the Bible – the Creation, Adam and Eve, Noah and the ark – convey timeless truths about God, human beings, and the proper relationship between Creator and creation expressed in the only form capable of transmitting these truths from generation to generation. Religious truth is of a different order from scientific truth. Its purpose is not to convey scientific information but to transform hearts.

We the undersigned, Christian clergy from many different traditions, believe that the timeless truths of the Bible and the discoveries of modern science may comfortably coexist. We believe that the theory of evolution is a foundational scientific truth, one that has stood up to rigorous scrutiny and upon which much of human knowledge and achievement rests. To reject this truth or to treat it as “one theory among others” is to deliberately embrace scientific ignorance and transmit such ignorance to our children. We believe that among God’s good gifts are human minds capable of critical thought and that the failure to fully employ this gift is a rejection of the will of our Creator. To argue that God’s loving plan of salvation for humanity precludes the full employment of the God-given faculty of reason is to attempt to limit God, an act of hubris. We urge school board members to preserve the integrity of the science curriculum by affirming the teaching of the theory of evolution as a core component of human knowledge. We ask that science remain science and that religion remain religion, two very different, but complementary, forms of truth.