All Work and No Play

The International Training Seminar, sponsored by our Answers WorldWide department, with ten internationals continues this week on a high level of “intensity.” Gathered around the conference table in our AiG Boardroom the trainees have listened to lectures that range from the basic relevance message, the biblical Flood, the race issue, and several more. With each speaker, our candidates scramble to type information into their laptops that they will use in their ministries. Practical sessions on how to use PowerPoint, the Internet, and other available tools created as much intense interest as they prepare for their future ministries.

The old phrase “all work and no play” encouraged us to purchase tickets to an American baseball game here in Cincinnati. It was the first such game any of them have ever attended. Several AiG staff came to the game and attempted to explain our very-American game.

There was great joy, excitement, and praise when they were taken to the AiG bookstore for a shopping spree that would include nearly $500 worth of AiG ministry books, DVDs, and CDs. One Middle East couple said that this was the fulfillment of one of their greatest dreams. A Bible school president from Hong Kong reviewed all that was available in the bookstore and told of how these materials would impact his students all over the Chinese-speaking world. Another told us that she did not want to sleep for fear of missing something.

Please pray for these folks as they face our AiG speakers to evaluate them as they now make creation speeches of their own. This is just like facing final exams.

AiG through this “Intense 1:1 Instruction” has fulfilled several creationists’ dreams.

I have included two photographs taken from our special flag ceremony in front of the AiG staff and also three photographs of myself being presented with copies of translations of various AiG materials in Albanian, Chinese, and Hebrew (when you see the stack in my hand, you will have to praise the Lord—this is just a SMALL sample of all the AiG translation projects around the world). 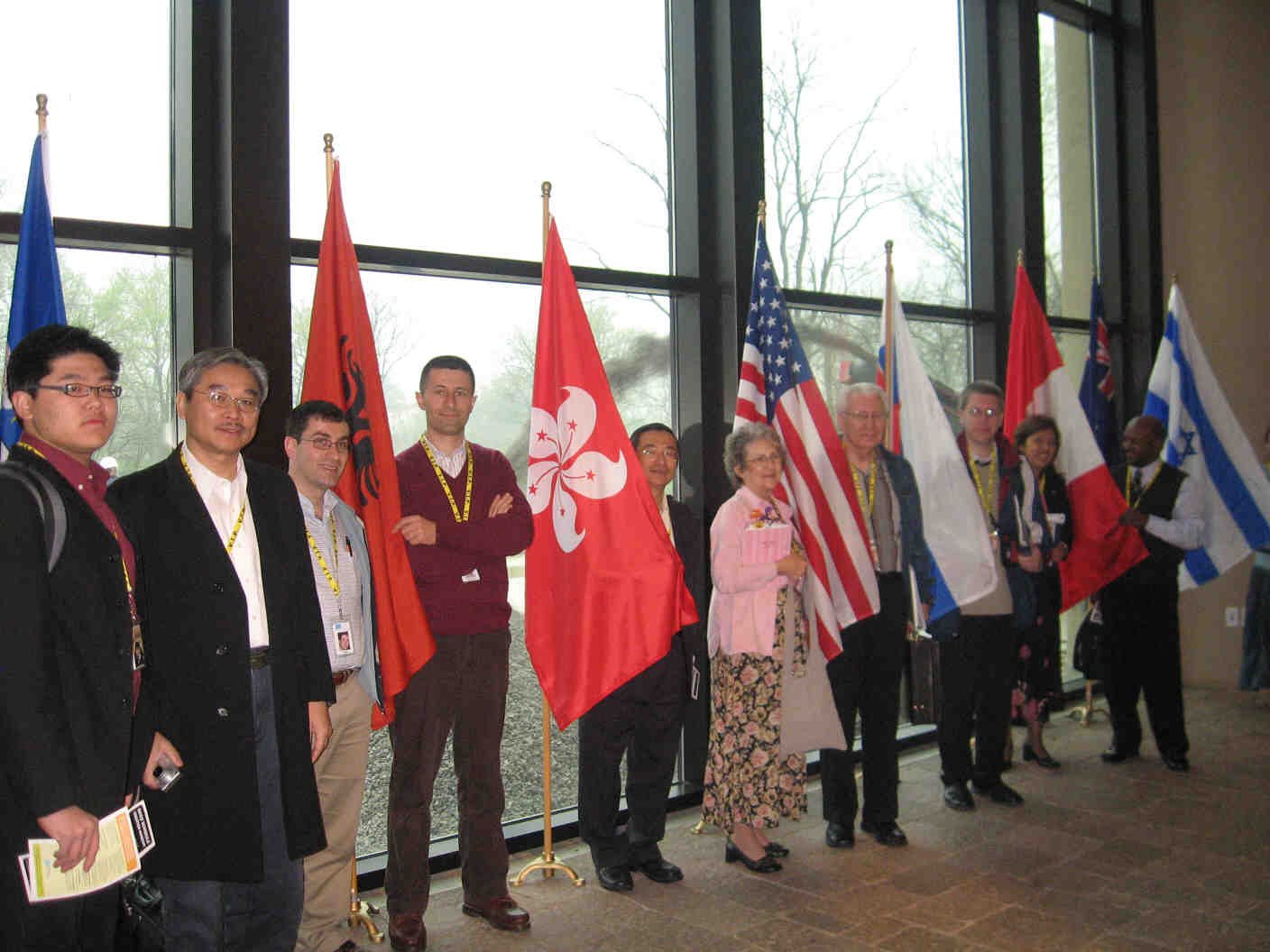 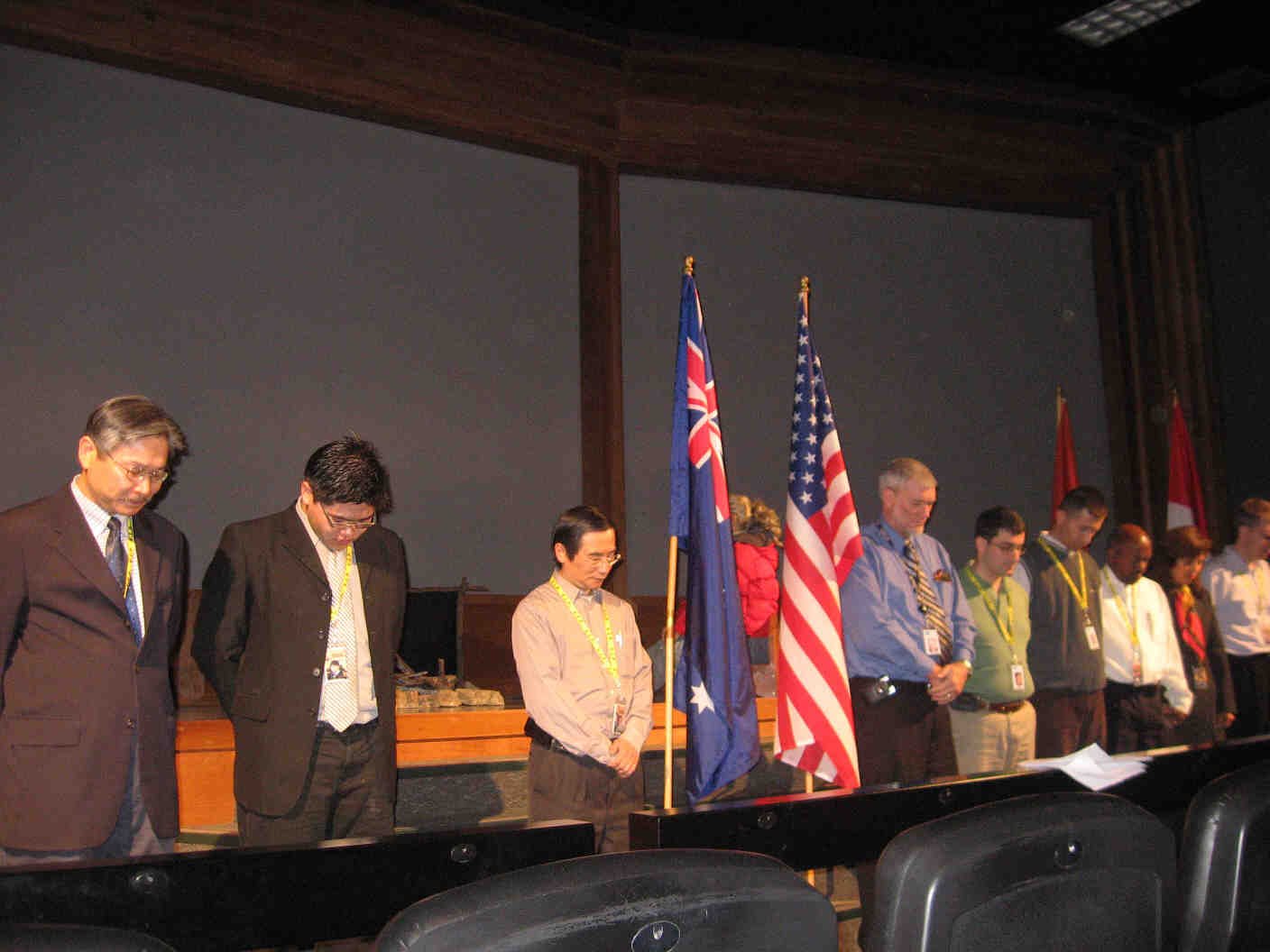 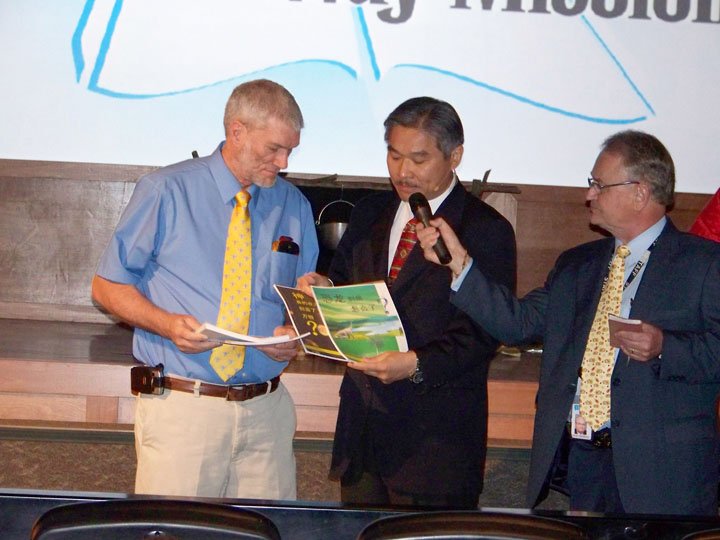 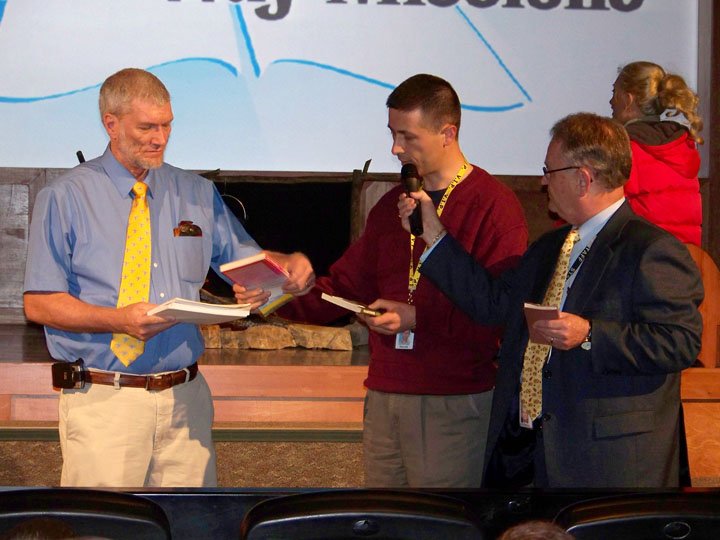 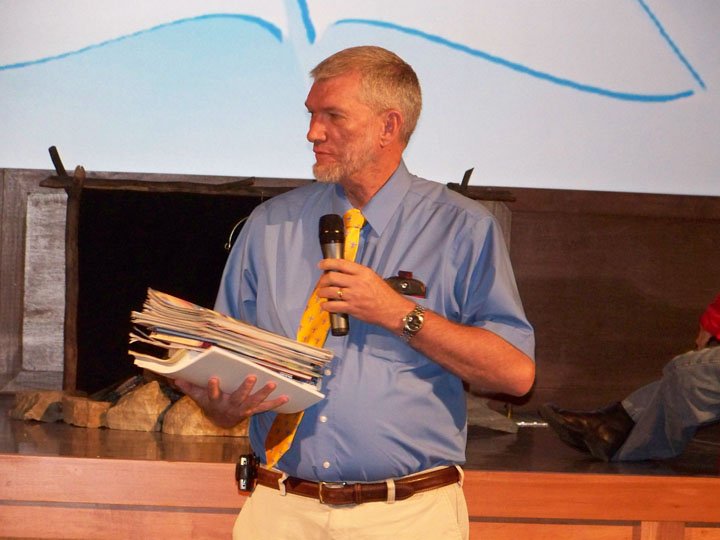 NEW ARRIVALS AT THE CREATION MUSEUM

The Creation Museum welcomed three miniature donkeys as the first animals for the petting zoo scheduled to open at the end of May. This will be a real hit with kids and adults. I have included three photographs taken of the donkeys and their new pen. The petting zoo has been sponsored by a Christian foundation from Australia! 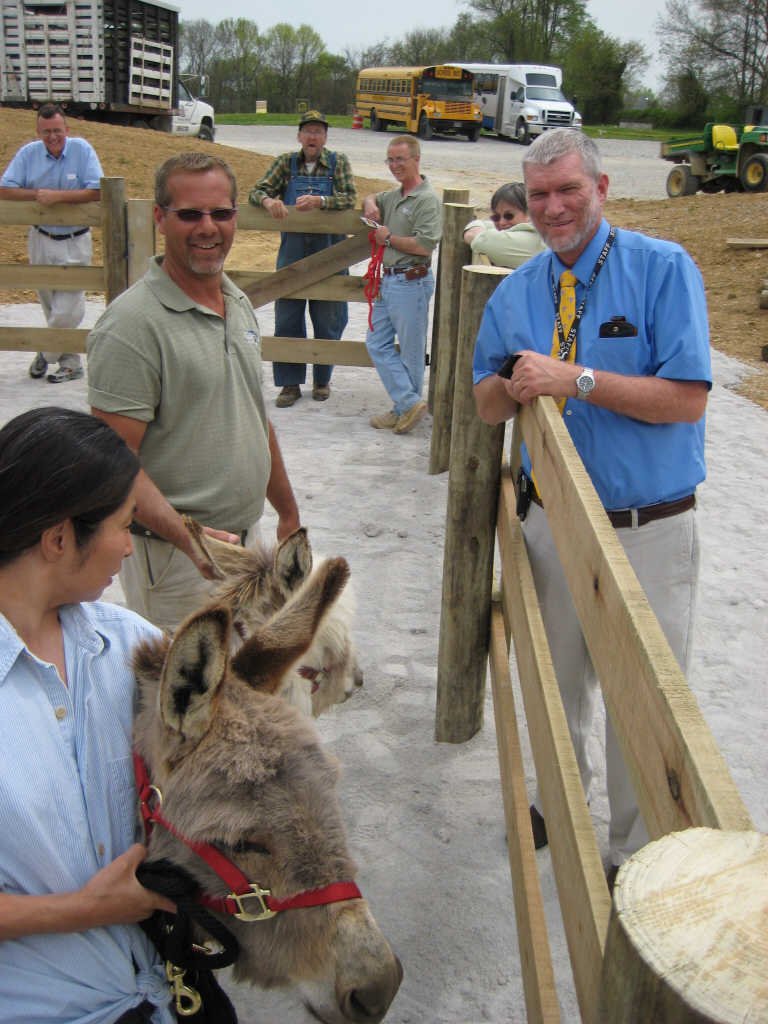 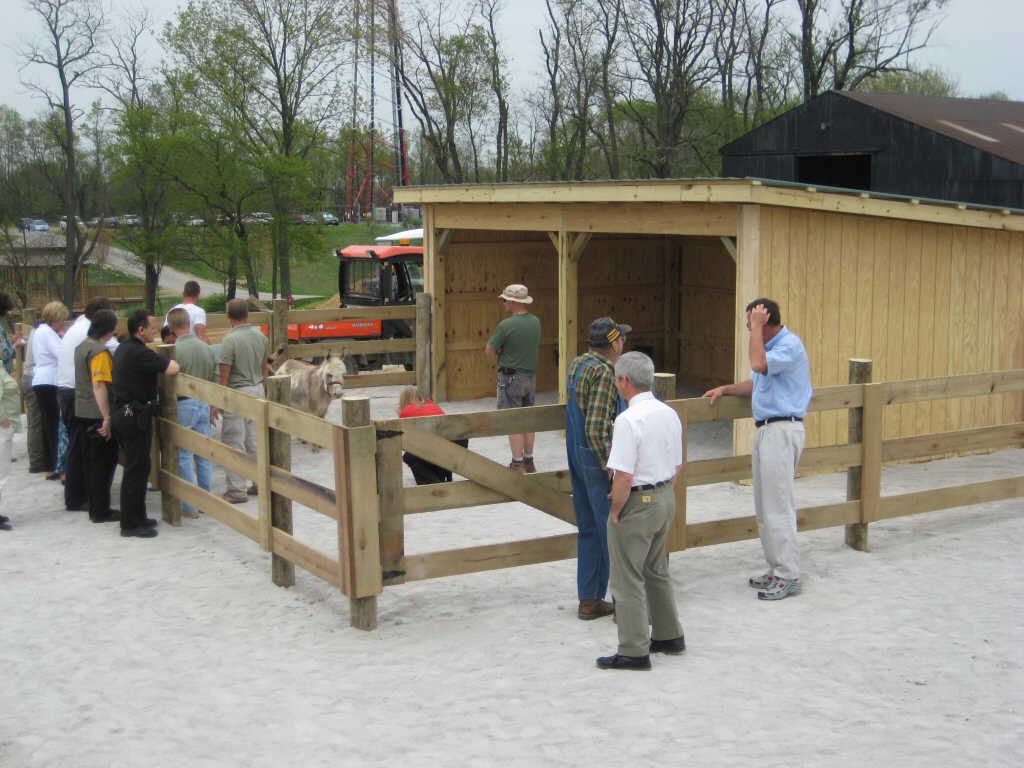 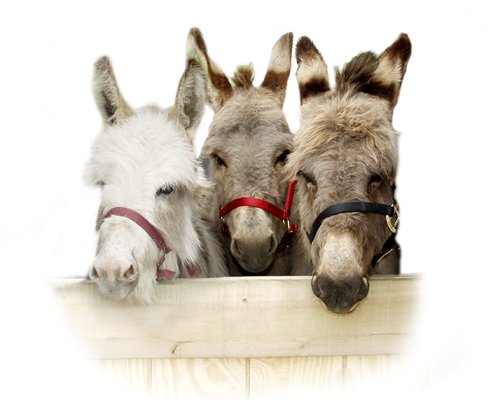 A CHILD REACTS TO THE EXPELLED MOVIE “SKEWED PERCEPTION OF . . . SCIENTISTS”

I thought the following sent in by a mother concerning her daughter’s reaction to Expelled important for all to read:

I took my 4th grade daughter (who just this year is starting to get the evolution story in science class) to Expelled. She was shocked by the scientists’ comments—shocked that people would think that way. I’m thinking she’s got a skewed perception of all scientists as dispassionate, matter-of-fact, truth-seekers, and it was shattered to an extent—but that’s the impression given from schools, educational programs, etc. I had not engendered that, having been a research assistant at [a university] and dealing with fallible, opinionated graduate students and scientists (although I wouldn’t question their integrity as researchers). I found her reaction interesting to say the least.

If you haven’t seen the movie Expelled yet, I urge you to do so before it is no longer in the theaters. Here is another sample of feedback we received this week:

I hope you will let Ken and the folks at AiG how much we enjoyed this movie, Expelled. We were the first in line at the first showing at our NewTowne Center in Williamsburg, VA. We encouraged our pastor . . . to go, and he ended up going twice; and [he also made] an announcement at both church services for everyone to go see the movie . . . . Thanks for the heads up. I will even be talking about this matter at my . . . Bible study tomorrow . . . . My approach will be that I need to educate my grandsons re these matters.

And, by the way, the website at AiG is just great!!! You have done an excellent job. And I love the search engine; leads me to all the scientific articles I need. May the Lord continue to bless you and AiG!

“I have given it to you”

(Gal 1:3-4) our Lord Jesus Christ, who gave himself for our sins

God knew we had no offering to bring to reconcile ourselves with God who we sinned against, so He gave us one, the death of Himself, the Lord Jesus Christ. Thanks for stopping by and thanks for praying.