Greetings. As I continue my speaking tour of the United Kingdom, much is also happening back at the office and museum in northern Kentucky.

Phillip Johnson, recognized as the father of the Intelligent Design Movement, visited the Creation Museum on Friday. He and his wife Kathie were in our area speaking at Cincinnati Christian University. Mr. Johnson is a former law professor at UC–Berkeley (California) who is best known for his 20 years of writing (Darwin on Trial) and lecturing to expose the fact that evolutionists have their own presuppositions and biases (e.g., naturalism and materialism) that they bring to their research. Of course, creationists like those here at AiG admit their presuppositions. In his brief lunch-time talk to some of the AiG staff, Mr. Johnson especially noted the bias of the late evolutionist Carl Sagan, who famously declared in his Cosmos documentary that “The cosmos is all that is or ever was or ever will be.”

Mr. Johnson was introduced to the staff by AiG’s geologist Dr. Andrew Snelling, who has known him for many years (they last met about four years ago in Great Britain). Mr. Johnson also gave some insights into the efforts by some ID proponents to influence public school science teaching. He talked about the state of the ID Movement today and observed that ID scientists are now devoting more time to scientific research into design in nature and other fields (e.g., cancer research).

At age 67 and slowing down somewhat after two strokes, Mr. Johnson was very glad he could fly from California to pay both CCU and AiG a visit. He had heard so much about the museum and partly accepted the invitation to speak at CCU so that he could tour the Creation Museum. So, we were honored to have him visit, since he does not travel as much and also because AiG is not a part of the ID Movement (we have some important differences)—it showed what a gracious gentlemen he is despite some differences of opinion. 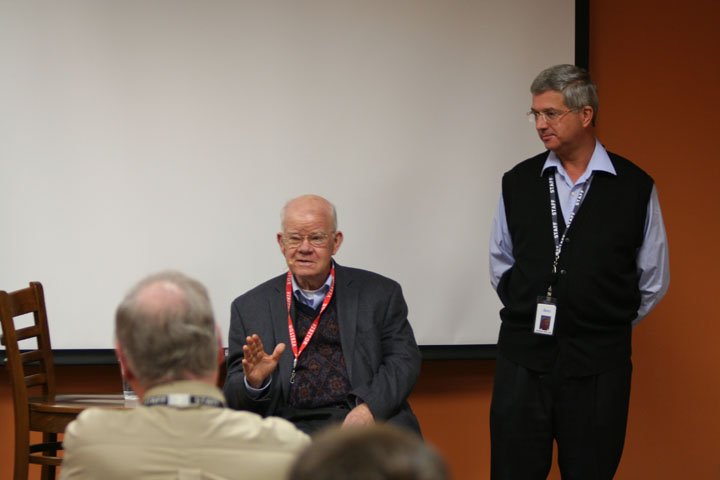 Dr. Snelling, who is the editor of our on-line journal, sent me another report while I’m here in the U.K.:

The seventh paper has just been posted in Volume 1 of the journal, and five more papers are currently under review. Such is the growing interest among creationist researchers in only 11 weeks since the journal was launched on January 9.

The ever-watchful evolutionist establishment has reacted in surprising ways. The January 24 issue of Nature, arguably the world’s leading weekly scientific journal, carried a report with the bold heading “Creationists launch ‘science’ journal.” Then in early March, the submission of a bogus geology paper, by a Ph.D. materials scientist who was attempting to undermine the credibility of the journal and its editor, was easily foiled. The almost “deified status” of evolutionary science surely depends on the integrity and honesty of scientists, yet this easily caught attempt to discredit creationists was a deliberate fraud, blatant dishonesty, and thus hypocrisy. Be sure to watch the AiG website for a special report on attempts to submit bogus papers in the coming days.

We have 1,100 people already registered for our national apologetics conference in Branson, Missouri, this July. This Friday is the last day you can receive an “early bird” discount. Go to that webpage and note the special family discount (as well as discounts for singles and couples) for this 3 1/2 day conference—featuring some great Bible teaching, family activities, and the many generally wholesome attractions that Branson offers.

Thanks for stopping by . . . and thanks for praying (especially for our tour of the U.K. right now).

Previous Article Greetings from the U.K. Next Article U.K. Update