“Come for the game, stay for the fun”

That was the slogan for the CincinnatiUSA.com booth this past Thursday–Sunday as the Creation Museum took to the road on what’s called the “Cincinnati Reds Caravan.” Two caravans toured simultaneously throughout Reds baseball country (a four-state area). The Creation Museum works with the Cincinnati USA Regional Tourism Network to promote the many exciting activities and attractions in our region, since we are so near Cincinnati (check out www.CincinnatiUSA.com when you plan your visit to our museum).

The opportunities to promote the Creation Museum have been plentiful since we opened about eight months ago, but few promotional efforts have been as unusual as what happened a few days ago when Carl Kerby and Jason Goff of our staff were asked by the Cincinnati USA Regional Tourism Network to join the “Cincinnati Reds Caravan.” In all, nearly 30 stops were made in 4 days. Jason and Carl (with Mark Looy “pinch-hitting”—to use a baseball term I’ve recently learned—on the last day) were able to pass out museum brochures as baseball fans stood in line for autographs.

Every year at about this time, two groups of players and staff with the Reds baseball team take two different routes by bus, one traveling south and the other to the north of Cincinnati—to promote the upcoming Reds baseball season (starting in late March). Cincinnati USA’s idea was that people from outside the Cincinnati metropolitan area should consider taking in a Reds baseball game, and while in the region, also visit attractions like the Creation Museum (just 20 minutes away from where the Reds play at Great American Ballpark along the Ohio River).

Thousands of people came out to meet the caravans at various venues—Indianapolis, Louisville, Lexington, Columbus, Dayton, the West Virginia city of Huntington, etc.—to get autographs from star Reds players like Brandon Phillips (see the photograph below).

Thousands of museum brochures were handed out with special Reds-related discount coupons for the Creation Museum stapled on the brochures. Carl and Jason engaged several hundred people in conversation about the museum.

Here’s a specific idea for the summer: think about visiting the Creation Museum on the weekend of August 16. Why? The Sunday game (August 17) at the Cincinnati Reds ballpark has been designated as “Faith Day,” and so, we expect many area visitors to do both activities that weekend. We will share more about that later on this website and how the museum will participate at that faith-sharing time in front of the baseball crowd; for the moment go to http://www.youthspecialties.com/faithdays/ (where last we checked 2007 dates were listed; we will contact their web manager). And don’t forget www.CincinnatiUSA.com. 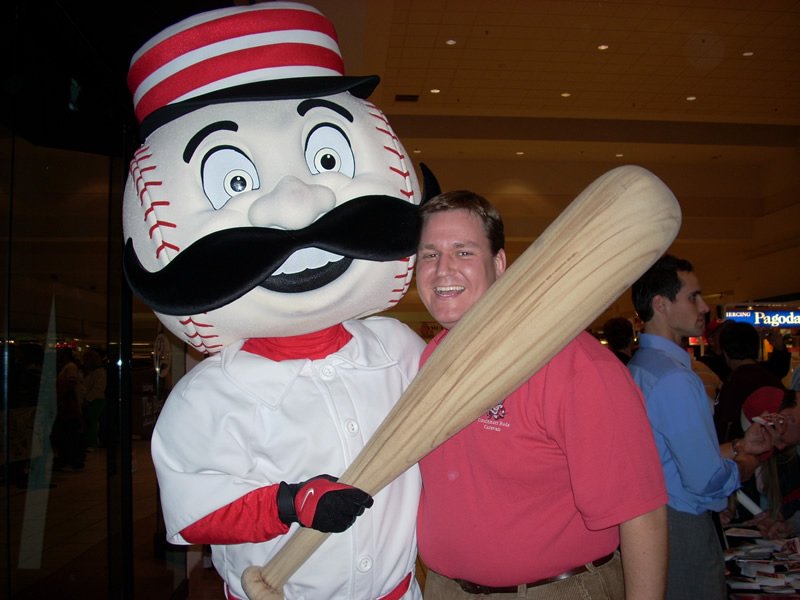 On Monday I spoke to over 1000 school students (elementary through high school) at various chapels in California. I have included a photograph taken as I spoke to 450 students in grades 9–12 at Desert Christian High School in Lancaster. At such venues, we allow the students to purchase a copy of the book Evolution Exposed for only $3 (normally $16)—this is part of our outreach to get such material in the hands of as many young people as we can. The book Evolution Exposed has been distributed in the tens of thousands across the nation (you can purchase it from AiG’s website at a special price per case to give away to high school and college students).

This book was written after the author (AiG’s Roger Patterson) compiled every reference to evolution/millions of years in the four main biology text books used in public schools across America—then Roger gave the answers/rebuttals to all the evolutionary/millions of years arguments including web links etc. This book really gives answers to the most used arguments in the education system (and media) to the major evolution/millions-of-years arguments.

At the final night of the AiG conference in Lancaster, around the same number of people attended as the evening before. The people who spoke to me were so excited.

At the Lancaster meeting last night, one lady told me she became a Christian 18 months ago as a result of someone obtaining a set of AiG videos at the last conference I spoke at in Lancaster 2 years ago. She couldn’t thank me enough for the ministry of AiG and how the Lord used it to change her life.

I had to laugh when the pastor of Grace Chapel related the story of how I came to go to Lancaster 2 years ago. He saw me at the airport in Atlanta (which is not surprising—I think I spend half my life in airports!!), and we got talking. He asked me to come to Lancaster to speak—after about an hour I called my assistant at the office and had her look into me doing this. He said he was traveling with his mother (actually I met her last night and she told me the story also) and she watched from a distance as he talked with me in the airport. His mother didn’t know who I was at the time. After he spoke and he went back to his mother, she said something like, “I have been praying for you the whole time you were witnessing to that man—did he get saved?—I have been praying he would receive the Lord.”!!!!

We spent another day in California visiting friends of the ministry, then we return to Kentucky (then we come back to California—San Diego—in 9 days for a major AiG conference at which Carl Kerby and I speak—you can obtain details from the AiG website).