At around 1:55 pm Saturday afternoon, the ticket machine printed out the ticket for the 100,000th visitor as a family from Buffalo New York lined up for their visit to the Creation Museum.  The photograph shows Kevin and Debbie and the kids - Samantha, Kevin Jr., & Quinn (and I’m in the photo as well).  They had previously heard me speak at a homeschool conference.  They said they intend on really talking the Museum up to their church. 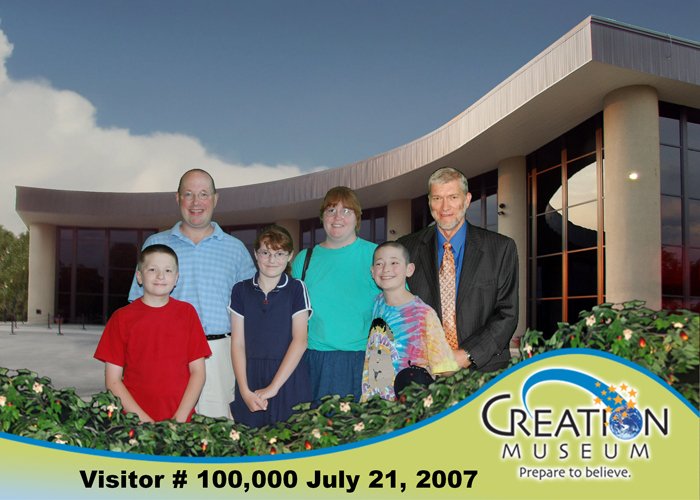 It is ONLY seven weeks since the opening week!  Considering we’ve heard (from Christian and non-Christian sources) such things as:

... and many more negative comments—but it is obvious the Lord has blessed!  The number of people coming is also helping the whole area: people are staying in hotels, going to restaurants, and attending other attractions in the area.  Today someone told me that after spending two days at the Creation Museum, they were going to go to the Freedom Center (the Underground Railroad Museum)—another family said they were staying on after visiting the Creation Museum to go to King’s Island (amusement park), and so on.

The Cincinnati and Kentucky Enquirer newspapers had an article about the Creation Museum expecting its 100,000th visitor on Saturday as a main front page article.  You can read the article at:  http://news.enquirer.com/apps/pbcs.dll/article?AID=/20070720/NEWS0103/307200044

You will be reading this blog on the last day of the very successful and exciting Family Camp.  All the presentations were videoed, so AiG will be releasing many new DVD’s over the next few months.