It seems like hardly a day goes by lately that the Creation Museum is not mentioned in a newspaper, magazine, TV news program etc.

Today, The national newspaper USA TODAY, and our local CINCINNATI POST had articles reporting on the Creation Museum:

1. A not very complimentary commentary in USA Today stated:

...Why, then, are they bothering with fossils and geology and quasi-scientific exhibitions that purport to prove that the Bible "can be trusted," as the organizers of the Creation Museum phrase it? No doubt, concern for the public credibility of their faith has a lot to do with it. They appear to have accepted that we live in a rational age, one that will not abide propositions that lack objective evidence to back them.

How ironic, then, that by dabbling in science to promote their beliefs, anti-science creationists are more likely eroding the very credibility they aim to bolster.

Granted, the new museum in Kentucky, like the creationist book at the Grand Canyon, may shore up the already-believers. But if winning new converts to Christianity is the aim, the strategy can only backfire...

This is quite an extensive article dealing with Tom Vail's Grand Canyon book controversy we've reported on once again recently, and the beliefs of Dr. Kurt Wise (PhD in paleontology from Harvard) who is a friend of AiG and a Creation Museum consultant. You can read the whole commentary at:

The Creation Museum in Petersburg, the Grand Canyon Skywalk and New York City's New Museum of Contemporary Art have what in common? They all made the list of "12 Most Intriguing New Things for 2007," selected by the Web site sixnewthings.com. The Dallas-based Web site identifies six new things in 70 selected cities each month, highlighting everything from restaurants and roller coasters to architecture and theater. The "Most Intriguing" list is an annual offering of some of the most eye-popping debuts ahead. The Creation Museum, scheduled to open this spring, has stirred international controversy with its goal to debunk evolution and show the Bible as the true history of the world.

You can read the entire article at: http://news.cincypost.com/

A very sad news report from MSNBC--but something that I have often stated in my talks--is that the church is dying in Europe. Church buildings are being turned into bars, theaters, Sikh Temples, night clubs--just about anything you could think of. I have many photographs of such 'converted' churches I've collected from my tours in England. Here are excerpts from the MSNBC article:

Given the shifting demographics of an increasingly secular Europe, the conversion makes perfect sense. Across much of the continent, churchgoing is in long-term decline, while a swellingand devoutMuslim immigrant population needs ever more places to worship. According to a forecast by the British-based group Christian Research, practicing Muslims will outnumber practicing Christians in England within a few decades. More than 1,600 churchesabout 10 percent of the country's totalhave been formally declared redundant by the Church of England. And the English have recognized the new reality: if church buildings are to survive, new uses must be found. While a handful serve as mosques or Sikh temples, many more have found roles as cafés, concert halls, warehouses or chic apartments... The same inexorable trend is at work across Europe, where church attendance is dropping precipitously even in the Roman Catholic countries.

For a generation that's rarely set foot in church, preserving the buildings themselves matters more than saving faith. For would-be clowns, there's a circus school in the former St. Paul's Church in Bristol, England. Madonna has performed in the Paradiso, a long-established church turned club in Amsterdam. Diners in Rome are happy to eat at the Sacro e Profano (Sacred and Profane), a popular downtown restaurant housed in a medieval church, and a major restoration project in Dublin saw the once-derelict St. Mary's Church reborn as a high-end restaurant...

What you read in this article is the result of the evolutionizing of the church in Europe--as the church leaders accepted millions of years/evolutionary ideas and compromised Scripture, the subsequent generations rejected the Bible even more--and now hardly any of the population attends church.

You can read this entire very sad article at: http://www.msnbc.msn.com 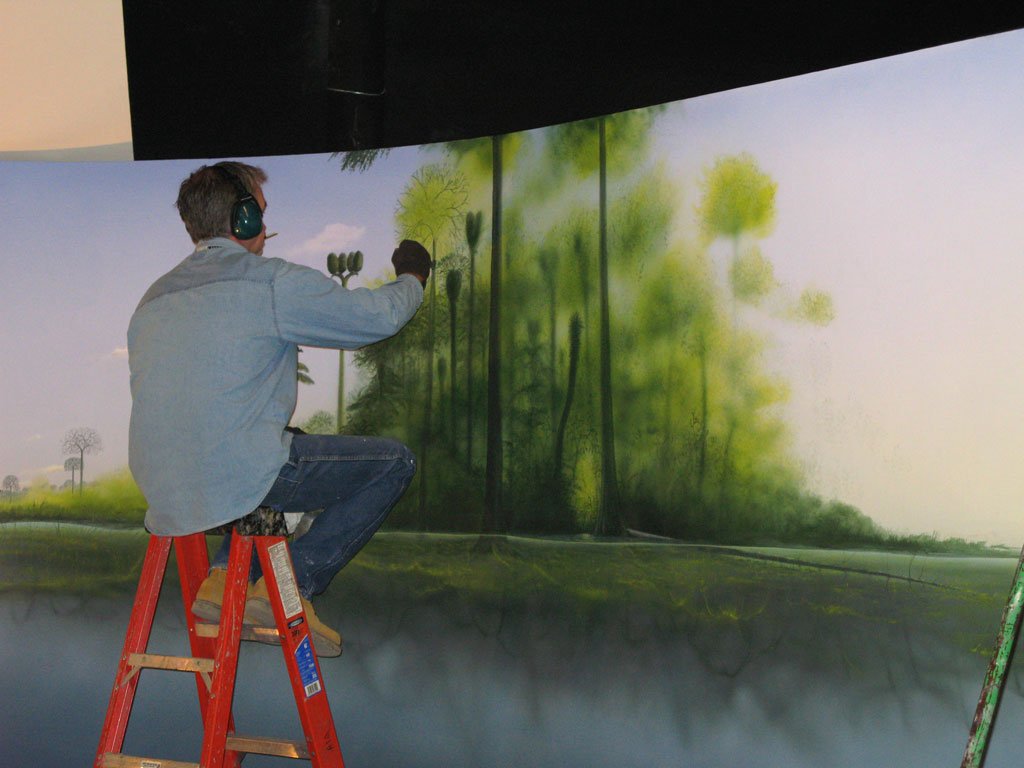 I've attached a photograph showing a sneak preview of the mural AiG's muralist Mark Coe is painting for the Flood Geology room in the Museum. This mural will depict what the earth might have looked like before Noah's Flood.

Previous Article Struggling with the origin of races Next Article Creation Museum to cause a quake?