AiG at Barnes and Noble!

Saturday at a "Barnes and Noble" bookstore in the Dayton area was a first for myself and AiG.

The Customer Relations manager organized a book signing of books I've authored that have been published by Master Books. Surprisingly, there was a bigger response at this secular bookstore than I've had at Christian bookstores for such author signings.

This photograph shows the lady who purchased the very first copy to be sold anywhere in the world of my new book "How Can a Loving God..."--which deals with the issue of death and suffering and a loving God. Master Books overnighted the first copies straight from the printer to this Barnes and Noble. 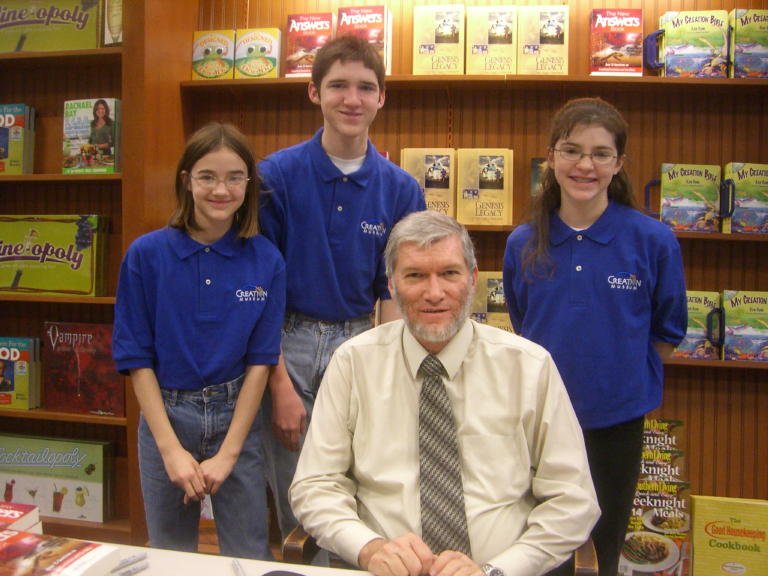 Another photograph shows three members of the Brook family (Elizabeth, Lewis, and Victoria) - Lifetime Charter Members of the Museum who came to Barnes and Noble to meet me and purchase one of the latest books.

Both The New Answers Book and the How Can a Loving God... book were very popular at the Barnes and Noble signing.

Many people gave testimony as to how the ministry had greatly affected them or their friends etc. One man told me of a university student who told him he survived secular university because of the resources from Answers in Genesis.

STANDING ROOM ONLY IN DAYTON

On Saturday night, after the Barnes and Noble book signing, I gave two talks at a church in Dayton. There was standing room only as people kept coming in after the session had started.

I had SO MANY thank me for what the ministry had done in their lives. One 12 year old came and asked me what I thought of "transcendentalism." When I was his age, I don't think I could pronounce such a word, let alone know what it meant! He gave me $10 donation for the Creation Museum.

As I was getting ready to leave, a secular humanist came to talk to me about a statement I had made concerning those who don't believe in God having no ultimate purpose and meaning in life. He said he had purpose and meaning--but I continued to challenge concerning the fact that from his perspective, when he died, he wouldn't know he even existed, so what is the purpose of him saying he had "purpose and meaning" in this existence! Anyhow, we talked about a number of things and I trust I did challenge him to think about his life and eternity. Please pray for him.

The tour company in charge of bookings for the Alaskan Cruise ship say it is very likely the Cruise will sell out very soon!

So, if you want to go with AiG on an Alaskan cruise, you need to book urgently! See our events page for details.