The existence of thousands of orchid species staggers the imagination. Yet each species seems perfectly adapted for the insects that pollinate the flower. What does this tell us?

What are those big, beautiful, fragrant flowers with the odd petal in the middle that you’ve seen in corsages and wedding bouquets? Why, orchids, of course! Simply saying the name ignites images of dazzling colors and shapes. The amazing variety of species (about 25,000 worldwide) staggers the imagination.

Every time I see yet another orchid species, in all its beauty and variety, I am reminded of my Creator’s handiwork. From the moccasin-like lady’s slippers to the bespeckled oncidiums or the intricate little babyboot orchids, these extravagant flowers are just variations on one basic theme that defines the orchid family.

Truly awe-inspiring, this bouquet of flower variations makes it possible for different orchids to be adapted to different types of insect pollination. By “adapted,” I refer to structures precisely suited to accomplish specific functions, such as specific chemicals that attract male wasps to a fly orchid. While the term adaptation is often used to imply modification, it could just as easily refer to God’s pre-programmed designs that enabled life to refill the earth after the Flood (see pp. 71-72, where this distinction is discussed).

In the generalized orchid diagram (Figure 1), we see that a single central column supports both the pollen-producing and pollen-receiving structures. Most other flowers separate these parts. Another unusual feature of orchids is that the third petal, called the labellum or “lip,” is more elaborate than the other two. The lip sits on the lower side of the flower, where it serves as a landing platform for pollinating insects. Instead of powdery pollen like other flowers, orchids hold together their pollen in two waxy bundles (called the pollinia), which are attached to a sticky pad.

When an insect lands on the lip in search of nectar, its mouth or body brushes the sticky pad, and the pollinia are glued to the insect. When the insect lands on a different flower, the receptor on the new flower’s central column snatches the pollen bundles.

Without this cross-fertilization between different flowers, the seeds couldn’t develop. And it’s essential that more than just one seed develop at a time. Orchids store seeds in seed capsules, which cannot mature unless most of the seeds are fertilized. Since these capsules contain thousands or even millions of seeds (orchids have the smallest known seeds), getting all that pollen transferred at one time is vitally important.

With everything stuck on one single column, orchids seem to have “less structure” with which to accomplish pollination—at first glance, anyway. In fact, God in His infinite wisdom provided orchids with a more complex, more efficient basic structure to transport the large number of pollen grains from one flower to another flower. This design is also more plastic and adaptable than most other flowers. 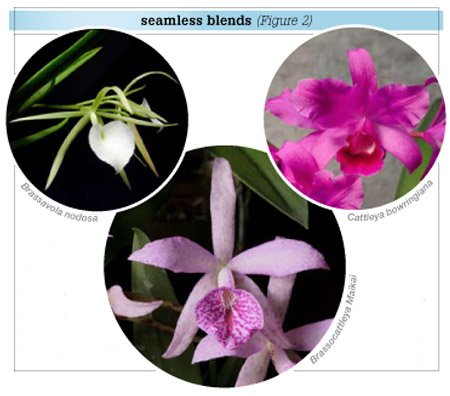 Orchids are well known for their ability via hybridization to seamlessly blend stunning differences from different species into a single new flower. ©Prem Subrahmanyam, www.orchidstockphotos.com

The breathtaking spectrum of orchids arises largely through simple variations in a few features, such as petal size and shape, coloration, curvature, growth rates, fragrances, and development of ridges, ruffles, lobes, and nectar pockets. Demonstrating this plasticity, orchids are well known for wide crosses that seamlessly blend stunning differences from several species into a single flower (Figure 2).

Fly Orchid. In the photo of the fly orchid (Figure 3), what do you see? If it is an insect sitting on a flower, you are wrong. It’s the orchid itself!

The column and lip form the head and body of the insect, and the two remaining petals suggest the antennae. The flower produces an odor otherwise produced by females of certain digger wasps. The flowers are ready to be pollinated precisely when the male wasps are ready to mate but before the females are. The chemical attracts the male wasp to the flower, which physically resembles the female well enough for the male to attempt to mate with the orchid. In the process, the pollinia stick to the wasp’s head. By the time the wasp leaves in search of another “female,” the stalk of the pollinia dries out and positions the pollinia so that it can be deposited when the wasp reaches the next flower.1

Spurs. Many orchids have a tubular lobe, called a “spur,” on the back of the lip that fills with nectar. Butterflies and moths, with their long coiled “soda straw” mouths, feed on the nectar. In particular, night-flying hawk moths are attracted to white or pale yellow-green flowers that are visible at night. It is common to find orchids with spurs two, three, or four inches long because many moths have mouths that long when uncurled.

The real champion of long spurs is Angraecum sesquipedale, the comet orchid of Madagascar (Figure 4). Its spur is about 12 inches long, though some have been found up to 16 inches.2 At the time Charles Darwin was shown the comet orchid, no one knew what creature did the pollinating. Based on the idea of adaptation, Darwin predicted that a Malagasy hawk moth would be found with an equally long mouth.3 Though people scoffed at him, the moth was actually discovered in 1903.4

The fly orchid simulates the smell and appearance of a female wasp to attract male wasps for pollination (Figure 3). Only one moth—the Malagasy hawk moth (silhouette shown)—has a tongue long enough to draw nectar from the long spur of the comit orchid of Madagascar. The spur is 12-16 inches long (Figure 4). The lady slipper temporarily traps pollinating insects inside its large lip. Pollen sticks to the insect as it exits the back of the slipper (Figure 5). Photos from left to right: Nigel Cattlin/Photo Researchers, Inc.; ©Prem Subrahmanyam, www.orchidstockphotos.com; ©2008 Bob Jensen

Trap of the Lady’s Slipper. One type of orchid temporarily traps the pollinating insect. The lip of the lady’s slipper orchid (Figure 5) is a complex “one-way street.” Nectar inside attracts small bees, wasps, or flies that enter through the large opening of the “slipper.” Once inside, however, the bee can’t easily fly back out.

Trying to climb up the smooth inner walls and curled edge, the pollinator usually falls to the floor of the “slipper.” Here it finds traction on hairs that direct it to two windows in the back of the slipper. To get to the holes, it must first squeeze past the pollen receptor (which grabs any pollinia on the bee, and pick up new pollinia as it slips out the exit hole). The dimensions of each passageway match the size of the insect species that visits that species of orchid.5

The question naturally arises, “Why do those adaptations exist?” Eighteenth- and early nineteenth-century biologists generally believed that species were created where we find them. Before Darwin, the prevailing belief was that God had designed each orchid species and its pollinator to work together from the beginning, and neither had changed since being created.

Darwin was fascinated by orchids. He did not believe that claims of “creation” were helpful explanations. So he tried to explain orchid adaptations by natural selection. In fact, in 1862 he published the 360-page treatise The Various Contrivances by which British and Foreign Orchids Are Fertilised by Insects6 as the first follow-up to Origin of Species. He argued that the similarities between the structures in different species show that species change and new species arise over time.

But how should biblical creationists interpret such adaptations? Wide hybridization in the orchid family (crossing species to produce new varieties) shows that all or much of the entire family probably belongs to a single biblical kind—the orchid kind.7 Since the Bible implies that God designed kinds to change within limits (Genesis 1:11ff; 3:14, 18; 6:9–20; 9:1–4; Isaiah 65:25; Romans 8:19–22), we expect change from the orchids that survived the Flood to the many species that appear today.

The amazing plasticity of the orchid flower is testimony to the capacity of plant kinds to change within limits. Indeed, with the recent and ongoing advances in our understanding of DNA, creation biologists are exploring exciting new concepts that may explain the striking variation in orchids (see Creation’s Hidden Potential, p. 70).

The multitudinous diversity of orchids reminds me about the parable of the talents, applied to the plant kingdom (Matthew 25:14–30). In His sovereignty God endowed different plants with different talents for variation. He gave orchids especially versatile structures that could vary widely for pollination by diverse insects. God then commanded the plants to fill the earth. In their “obedience,” orchids responded by making the most of their many talents, similar to the servant in the parable who was entrusted with the most talents. Within the limits God designed for them, the orchids produced tremendous variety that attracted different insect pollinators. Orchids have yielded a double blessing of diversity and wonder, which delight their Lord and Maker.