Mystery Plant of the Desert

There is no other plant like it because it is so strange that some scientists have classified it as the only member of its species, genus, family, and order. 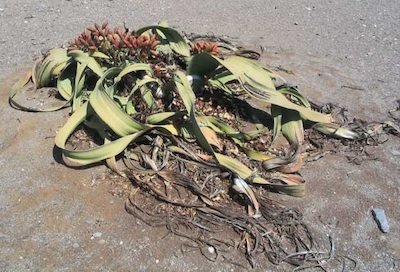 Friedrich Welwitsch was so overcome by the sight he simply knelt down and stared. Exploring southern Angola’s Namib Desert in 1859, this botanist knew it was some kind of plant, but never beheld such a strange looking specimen emerging from the hot and arid ground upon which he knelt. The plant consisted of a woody root system and a hollow stem with two wide leaves attached. The leaves were bent down and creeping along the ground and had been split and shredded so many times, they looked like a bundle of curly ribbons. What was this?

Today, Welwitsch’s mystery is solved and scientists have named the plant Welwitschia after the great explorer and medical doctor himself. Of course African people named the plant long before and either ate it raw or baked it in hot ashes. In the regional language of Herero it is called onyanga or “onion of the desert.” Botanists have classified it as a gymnosperm, which is the plant group that includes the cone bearing pine and spruce we use as Christmas trees. Gymnosperm literally means “naked seed” because seeds in this group are not encased in protective tissue. In contrast, angiosperms (“covered seeds”), refers to a plant group that produces flowers and grow protective tissue, like fruit, around the seeds.

Its Latin name, Welwitschia mirabilis, literally means wonderful Welwitsch. There is no other plant like it, because it is so strange that some scientists have classified it as the only member of its species, genus, family, and order. This makes an evolutionary history of its origins difficult to explain because it has no known ancestors. 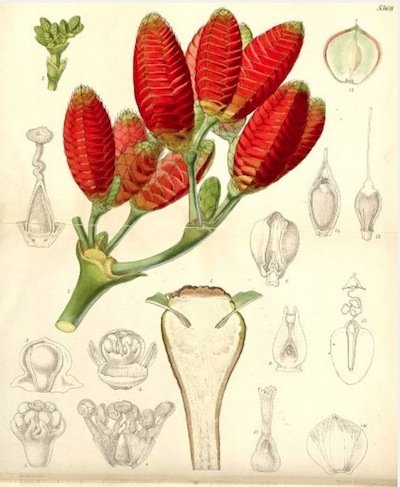 Male and female plants are separate. Male pollen that produces sperm come from salmon colored cones and females produce eggs from blue-green cones. Pollen needs to travel from the male to the female and, in many gymnosperms, wind performs this service, but not in Welwitschia. Instead, it gets help from insects like moths, flies, and wasps. Both male and female cones act more like flowers and produce nectar to attract them. As these wasps and flies search for the sweet nectar, pollen clings to them. As insects travel from male cone to female cone, they may transport pollen grains to a female. Once the pollen is deposited on the female cone, a tube grows out from both the pollen grain and the female egg and fertilization takes place in the pollen tube. This is unusual because normally it’s the pollen grain alone that grows toward the egg. When fertilization takes place a new baby (seed) is produced.

Its growth form is strange because of what happens after the seed germinates. The vertical growth region of the plant (apical meristem) dies after it produces the first two leaves. It is as if it has “lost its head” and, rather than grow tall, the leaves creep outward from the base. The stem may grow 3 feet (1m) above ground and the root may grow 3 feet (1m) below the ground. Over time, the leaves can grow to whopping lengths of 13 feet (4 meters) with circumferences of up to 26 feet (8 meters).

Welwitschia is a living fossil, meaning that when it is compared with fossil Welwitschia from the lower Cretaceous (last dinosaur) period, it has not changed any. These fossils were deposited in northeastern Brazil and could have been adjacent to Namibia in the pre-Flood supercontinent. From a naturalist perspective, and using evolutionary assumptions, this plant lived with the dinosaurs and hasn’t changed in over 140 million years! (See Evolution Exposed: Biology Unlocking the Geologic Record.) Not only has its form not changed through its history, it also experiences a lot of history. Welwitschia can live to be 1000 years old and some may be older than 2000 years.

Not Left High and Dry

Welwitschia stands as yet another testament to our Creator’s desire for the sustenance and provision of His organisms.

Welwitschia is native to the extremely dry Namib Desert and is found nowhere else in the world, with the possible exception of moist areas in Botswana. Our God has not left Welwitschia high and dry. Instead He has wonderfully designed this plant to thrive in arid conditions where rainfall may be 0 to 25 inches annually. Often found in dry river beds, the underground roots and stem can tap and store water. But that’s only the beginning. During the night, cool air from the cold Benguela current in the South Atlantic meets the hot air from the Namib Desert and a thick fog blankets the region. The ribbon-like leaves collect the condensation, and because of their downward bends and curls, water can roll down the leaf toward the plant base and land in the soil where stem and root can quickly absorb it. Fog can also be taken directly into the leaves through special openings called stomata. Their abilities to absorb and store water help other creatures as well. During droughts, animals like the rhinoceros and antelope will chew the thick leaves to obtain water and then spit out the rest. In addition, their water-conducting cells are not typical of gymnosperms. For example, many conifer roots and stems contain small water-conducting cells called tracheids. Angiosperm roots and stems have both tracheids and large empty cells called vessels, which are ideal for transporting water. So, fascinatingly, Welwitschia, as a cone-bearing gymnosperm, is a mosaic, not only having water/mineral-conducting cells (tracheids) of gymnosperms but also having vessel elements, typically only found in angiosperms (flowering plants).

Many plants have their stomata open during the day because they absorb carbon dioxide to make sugar using the sun’s energy, and then close at night. However, if the stomata were open during a Namib Desert day, plants would lose large amounts of water and dehydrate. Therefore, many desert angiosperms close their stomata during the day and open them at night for carbon dioxide absorption and storage. When the sun’s energy is available the next day, the carbon dioxide, which was stored as an acid in cells the night before, is changed into chemical forms so that sugar can be made. Welwitschia is unusual for a gymnosperm, because it may perform these same complex functions that other desert flowering angiosperms do. More research, however, is needed to confirm this.

Thanks to the work of Friedrich Welwitsch, we have learned much about the design of this plant. Welwitschia stands as yet another testament to our Creator’s desire for the sustenance and provision of His organisms. This unique plant is specifically designed to overcome the thirst for sustenance and the heat of adversity. This reminds me that our Father has created us uniquely, to tap into His refreshing waters and absorb His living Word, that we might enjoy Him and endure the heat of life’s hardships. The Psalmist puts it this way: “Blessed is the man . . . [whose] delight is in the law of the Lord, and in His law he meditates day and night. He shall be like a tree planted by the rivers of water that brings forth its fruit in its season, whose leaf also shall not wither; and whatever he does shall prosper” (Psalm 1:1–3 NKJV).

The Living Fossil: Welwitschia mirabilis. Nature Conservancy. Retrieved from taxusbaccata.hubpages.com/hub/Welwitschia-mirabilis on May 24, 2013.

Welwitschia mirabilis. Retrieved from www.plantzafrica.com/plantwxyz/welwitschia.htm on May 24, 2013.

Previous Article Cambrian Explosion Was the Culmination of Cascading Causes, Evolutionists Claim. Next Article Does the Dmanisi Discovery Demonstrate We Are All One Family?