Unusual in many ways, Uranus and its moons pose big problems for evolutionary theories of planet formation, and can be seen as an exciting testament to the Creator.

Bluish-green and big, about 64 times the size of Earth,1 Uranus is the seventh from the Sun of the nine known planets in our solar system. Unusual in many ways, Uranus and its moons pose big problems for evolutionary theories of planet formation, and can be seen as an exciting testament to the Creator. 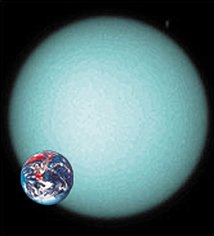 Uranus is some four times the diameter of Earth. It would take the equivalent of 64 Earths to fill its interior.

At 19 times the distance from the Sun to the Earth, Uranus is so far away that it takes 84 Earth-years to orbit the Sun once. Barely visible to the naked eye, Uranus wasn’t discovered until 1781, when famed British astronomer William Herschel, a Christian, noted an uncharted bright object traversing an area of sky he was studying.

Much of our information about Uranus and its moons was obtained from the Voyager 2 spacecraft, when it flew by the planet in January 1986. Even before Voyager 2, scientists knew that some of Uranus’s characteristics caused problems for naturalistic theories. By 1948, it was known that Uranus had at least five moons, but their orbits were not at all what had been expected. The moons” orbits were discovered to be perpendicular to the “ecliptic” (the plane in which most of the planets orbit the Sun). This meant that either the moons were orbiting Uranus around its poles instead of its equator, or else the rotational axis of Uranus itself was inclined way over compared to the other planets. The latter turned out to be the case. Uranus’s equator is at 98 degrees to the ecliptic.2 Instead of spinning like a top as it orbits the Sun, as the other planets do, Uranus rolls along on its side. Thus, for part of its orbit, the “north” pole of Uranus faces the Sun, while the “south” pole faces the Sun during a different portion of the orbit. (Indeed, there is disagreement as to which pole should be considered north, and which one south!)

This situation is impossible, according to evolutionary ideas about the formation of the solar system, namely that the planets condensed from a rotating nebula. Uranus cannot have formed this way naturally. What then is the evolutionists” solution? Most of them believe that Uranus did actually form the “correct” way, i.e. as according to evolution, but then was subsequently knocked over during a collision with another planet, supposedly the size of the Earth. Indeed, “Models for the development of the solar system cannot produce such an orientation without invoking a collision with another object.”3 How feasible is this explanation?

First of all, Uranus’s orbit shows no sign of such a catastrophic collision. Its orbit is one of the most circular of all the planets (only Venus, Earth and Neptune have orbits that are more circular). A collision would have more likely resulted in a more elliptical orbit. Also, Uranus’s orbit lies more closely within the ecliptic plane than any other planet except Earth. A massive collision should have disturbed the planet’s orbit more than this. 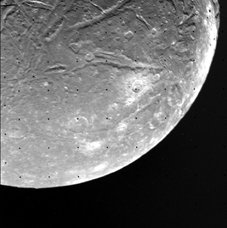 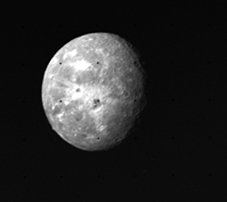 Above upper: Ariel, one of the moons of Uranus, has a diameter of 1,160 km (725 miles). The smallest surface feature that can be seen in this image of its southern portion, taken from a distance of 130,000 km, is approximately 2.4 km across. Ariel’s surface displays a complicated history.

Above lower: Oberon, 1,523 km in diameter, is the most distant of Uranus’s major moons. The dark spot to the right of middle is the crater Hamlet, with a diameter of 206 km.

Furthermore, the moons of Uranus pose many problems all by themselves. Today, they are orbiting around the planet’s equator, which is approximately at a right angle to the ecliptic. Obviously, these moons could not have been present when the supposed Earth–size object hit Uranus, because the moons would have been scattered or disrupted, and would not have quietly moved into stable orbits that are now inclined 98 degrees away from their previous orbits. Therefore, reasons the evolutionist, the moons must have formed after the impact, and the moons that we see today are actually the fragments left over from the impact. However, all of the moons combined, plus the particles in the small “ring” around Uranus, constitute only about 0.01% of the mass of the planet, which puts a severe limitation on the amount of debris produced by the collision. An impact violent enough to push Uranus over presumably would have produced much more debris than that—indeed, a currently fashionable idea about the formation of Earth’s moon uses a collision of a comparable relative scale to “produce” a moon with 1.2% of the parent planet’s mass.4

Finally, this idea of a catastrophic impact implies more than a little hypocrisy among the evolutionists. Christians are mocked by evolutionists for accepting the Biblical account of a global Flood (an event for which there is abundant physical evidence), because it was a one–time catastrophe. We are told that such catastrophes are unrepeatable, and are therefore “unscientific”. Yet here we see that evolutionists are allowed to invoke one-off planetary catastrophes with impunity, to overcome problems within their belief system.

As one of the four “gas giant” planets (Jupiter, Saturn, Uranus and Neptune), Uranus poses yet another problem for naturalism. The other three gas giants all generate energy (i.e. they radiate considerably more heat into space than they receive from the Sun). Uranus is alone in failing to do this. How can this be? If naturalistic processes formed the solar system, without a Creator, then the products of these processes should be very similar. In particular, Uranus and Neptune are very similar in size, atmospheric composition, rotation rate and location in the solar system. One would then expect that they would be similar in other major characteristics as well—but Neptune radiates into space more than twice the energy it receives, while it is disputed whether or not Uranus radiates any excess energy at all.5

If all of this wasn’t bad enough, evolutionists received a further series of rude shocks when Voyager 2 flew by the Uranus system in 1986, taking many photographs and measurements. “To the complete astonishment of scientists, the magnetic axis [of Uranus] is tilted approximately 60 degrees with respect to its axis of rotation. It is not known why.”6 The strength of the magnetic field was also a surprise to evolutionists, though not to creationists, as creationist astrophysicist Dr Russell Humphreys, using Biblical assumptions, had accurately predicted the strength two years previously!7 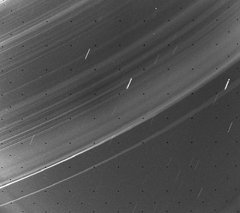 This wide-angle photographic exposure of Uranus’s rings was taken while the spacecraft was in the planet’s shadow. It took 96 seconds, causing the streaks which are background stars. The rings are comprised of microscopic-size particles which are very dark. The image covers an area about 10,000 km (6,250 miles) across.

In order to sustain belief in millions of years, evolutionists need to try to overcome the problem that Earth’s magnetic field, like all physical systems, is seen to be gradually decaying. Calculations indicate that it would not be here anymore if the Earth were more than a few thousand years old.8 So they assume a complicated “dynamo” model of planetary magnetic fields, to try to have the field sustain itself from the planet’s motion. Both the strength of Uranus’s field and the fact that its magnetic and rotational axes are so far apart defy the predictions of this evolutionary dynamo model.

Surprising, too, were the photographs that Voyager took of Uranus’s moons. Voyager discovered more moons than were previously known (we now know of 21). Of the five moons that were known already, Voyager happened to fly very close to the smallest one, a little moon named Miranda. Since Miranda is so tiny (having a diameter of about 480 km, only 14% of the diameter of Earth’s moon), scientists expected it to be a small, boring chunk of ice. Instead, it has proven to be one of the strangest objects in our solar system [see Miranda below].

We see then that Uranus, along with its moons, poses many unique problems for those who don’t want to accept a Creation event.

In today’s scientific age, one is often asked how it is possible to be a Christian in light of “all that science has discovered”. We see that just the opposite is true—the more we learn, the more we see that indeed, the heavens (along with all the rest of the creation) do indeed declare the glory of God (Psalm 19:1). 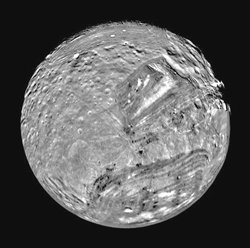 With one sheer cliff reaching nearly 10 km (6 miles) high, Miranda has some of the most dramatic terrain in the solar system. Heavily-cratered plains alternate with smooth, largely uncratered areas laced with intricate faulting and grooving, forming a spectacular patchwork, and posing all sorts of problems for naturalistic theories. “No one predicted anything looking like Miranda”,1 says one evolutionist astronomer. “The central problem in modelling the thermal histories of the uranian satellites is accounting for Miranda”,2 says another.

The usual explanation is that Miranda was “normal” (i.e. as expected by evolution) when formed, and was then repeatedly dismembered by collisions, and reassembled by the mutual gravitational attraction of the resulting pieces. NASA states that up to five (!) collisions and reassemblies were necessary.3 Others reject this implausible scenario and dispute whether this moon could even survive one collision, let alone five. “Although some sort of collisional disruption appears to be required, it is not obvious that the present terrain, with relief up to 20 km, would survive catastrophic disruption and reassembly.”4