Is the Moon Really Old?

If the earth moon system is as old as evolutionists say, we should have lost our moon long ago.

Because the presence of the moon over any part of the earth does not cause an immediate bulging response, this slight delay results in a continuous, slight, forward 'pull' on the moon.

Astronomer Dr Don DeYoung (Professor of Physics, Grace College, Indiana), in a technical paper presented at the Second International Conference on Creationism in Pittsburgh, USA, in 1990, raises an interesting problem for evolutionists.

There is a huge force of gravity between the earth and moon-some 70 million trillion pounds (that's 70 with another 18 zeroes after it), or 30,000 trillion tonnes (that's 30 with 15 zeroes).

The effect of gravity depends on distance as well as mass, so the pull on the near side of the earth (to the moon) is greater than on the far side. This causes the land and (especially) sea surfaces to bulge in response, as is apparent to us in tides.

Because the presence of the moon over any part of the earth does not cause an immediate bulging response, this slight delay results in a continuous, slight, forward 'pull' on the moon, causing it to spiral slowly outwards, away from the earth. The rate at which the earth-moon distance is presently increasing is actually being measured at about 4 centimetres a year. It would have been even greater in the past.

This immediately raises the question as to whether the earth-moon system could be 4.5 billion years old, as most evolutionists insist. Would we not have lost our moon a long time ago? Using the appropriate differential equation (which takes into account the fact that the force of gravity varies with distance), Dr DeYoung shows that this gives an upper limit of 1.4 billion years. 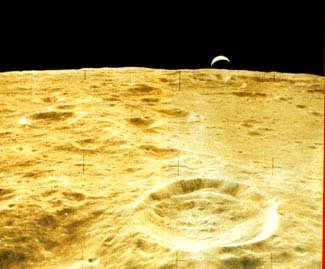 That is, extrapolating backwards, the moon should have been in physical contact with the earth's surface 'just' 1.4 billion years ago. This is clearly not an age for the moon, but an absolute maximum, given the most favourable evolutionary assumptions. Obviously, in a creation scenario, the moon does not have to begin at the earth's surface and slowly spiral out.* Evolutionist astronomers have not yet satisfactorily answered this, nor the lack of geological evidence that the moon has dramatically receded over the past 4.5 billion years, which would have to be so if their framework was correct.

* The moon was probably created close to its present distance from the earth. Over 10,000 years, lunar recession amounts to less than one kilometre.

The September 1998 issue of Creation magazine has a feature article on the moon - its creation and purpose, that will cover this issue and much more. See online version.