Astronomers have known for decades about the strange ‘connection’ between the galaxy NGC4319 and the quasar Markarian 205 (see Figure 1, below).1 Without any explanation so far, astronomers are still baffled, and with good reason.

Figure 1 is a reproduction of an isophote image of the galaxy and quasar made by superposing a number of photographic plates taken by Halton Arp using the 200-inch Palomar telescope.2 The image clearly shows that a luminous ‘bridge’ connects the two objects which is distinct and well away from any ‘pixel [picture element] bleeding’.3 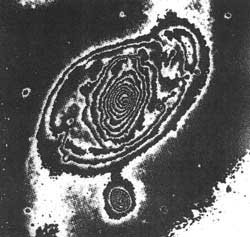 Figure 1: This isophote image of the galaxy NGC 4319 (above) and the quasar Markarian 205 (below), made by superimposing a number of photographic plates taken by Halton Arp using the 200-inch Palomar telescope, clearly shows the luminous bridge connecting the two objects (north is up, east is left). This photo appears in Arp, Ref. 2 and Arp et al., Ref. 3.

So what is baffling about such a clear linkage between this galaxy and its apparently close neighbouring quasar? The ‘basic’ problem is that the galaxy and the quasar have discordant red-shifts, which according to the standard (Doppler) red-shift interpretation means that the galaxy is receding at a velocity of 1800km/sec, whereas the quasar is travelling at 21,000km/sec. Thus, according to the Hubble law, the galaxy is 107 million light years away and the quasar is 12 times further away at 1.2 billion light years! Obviously, this simply cannot be, because the galaxy and the quasar are clearly connected together by a ‘bridge’, probably of luminous gas filaments. They give every appearance of existing together.

Some critics have claimed that the bridge is only an illusion, but Arp and his colleagues have staunchly defended the reality of this connection for many years, and Arp’s photography (Figure 1) has documented it. Ignoring this cosmological ‘anomaly’ won’t make it go away! Perhaps red-shifts may not be connected with recession velocities and so may not be a reliable index to distances in an expanding universe after all. These are very fundamental questions to our understanding of the universe. In the words of astronomer William Kaufmann:

‘If Arp is correct [about red-shifts not being distance indicators], if his observations are confirmed, he will have single-handedly shaken all modern astronomy to its very foundations. If he is right, one of the pillars of modern astronomy and cosmology will come crashing down in a turmoil unparalleled since Copernicus dared to suggest that the sun, not the earth, was at the center of the solar system.’4

James Waterhouse is thanked for bringing this unresolved ‘anomaly’ to our attention, and for providing the reproduction for Figure 1.