Image by Yzx, via Wikimedia Commons.

A Shark That Eats Its Veggies? 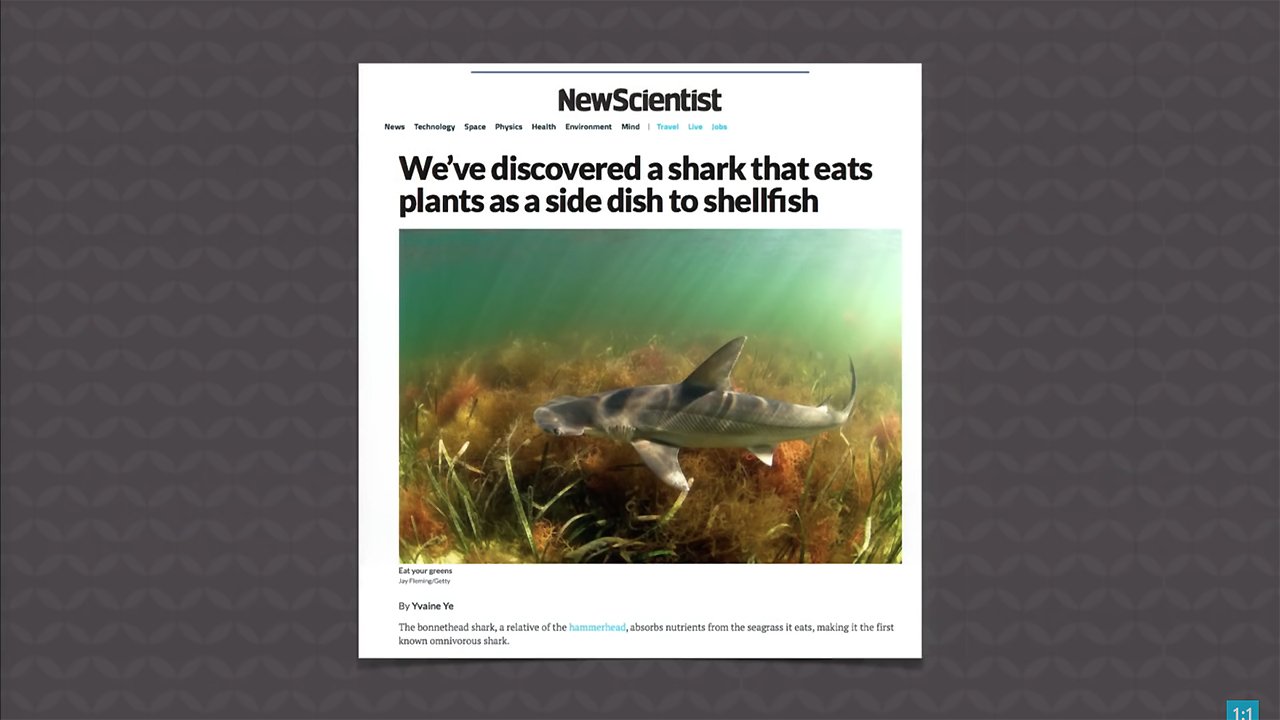 A news item caught our eye this week. It was reporting on a study which found that the bonnethead shark (a smaller relative of Hammerhead sharks) actually eats and digests seagrass. Now, scientists have noticed these sharks eating seagrass for several years but, perhaps influenced by their evolutionary worldview, had assumed they were just eating the seagrass to get at crabs, shrimp, or small fish living in and around the seagrass.

But when researchers fed some captive bonnethead sharks a mostly seagrass diet, they noticed that the sharks did just fine. The researchers used Carbon-13 to label the seagrass to see if the sharks actually digested the plants and gained nutrients from it. And to their surprise, the sharks did.

Samantha Leigh, the study’s lead author made a couple of fascinating quotes in her Fox news interview.

“We have always thought of sharks as strict carnivores, but the bonnethead is throwing a wrench into that idea by digesting a fair amount of the seagrass that they consume.”

“Given that bonnetheads have a digestive system that resembles that of closely-related species that we know to be strict carnivores, we need to re-think what it means to have a ‘carnivorous gut’.”

When you start from a biblical viewpoint, this study is not surprising at all. God created animals as well as humans to be vegetarian right from the beginning (Genesis 1:29–30). Evolutionists frequently bring up “strict carnivores” like sharks as supposed evidence against certain animals ever being vegetarian, thinking they are disproving what Scripture says. But time and time again, animals thought to be only carnivores are found to be vegetarian or omnivorous. This just further illustrates what the Bible says, that in the pre-Fall world there were no animals eating one another, no bloodshed, and no death. At the Fall, death, bloodshed, disease, and suffering entered all of creation, which now groans because of sin (Romans 8:20–22). So a mostly vegetarian shark shouldn’t (and doesn’t) surprise us—it just gives us one more small glimpse into what life must have looked like when God called everything “very good” (Genesis 1:31).

This item was discussed today on Answers News with regular host Dr. Georgia Purdom and guest Dr. Tommy Mitchell, medical doctor and speaker for AiG. In addition, Dr, Nathaniel Jeanson, geneticist and author of the book Replacing Darwin was a guest on the program. Dr. Jeanson discussed a recent debate he had on the NonSequitur Show with Dr. Herman Mays Jr. of Marshall University. Look for an article on this topic by Dr. Jeanson on the AiG website next week.

Answers News is our twice-weekly news program filmed live before a studio audience here at the Creation Museum and broadcast on my Facebook page and the Answers in Genesis Facebook page. We also discussed the following intriguing topics:

Watch the entire episode of Answers News for September 13, 2018.