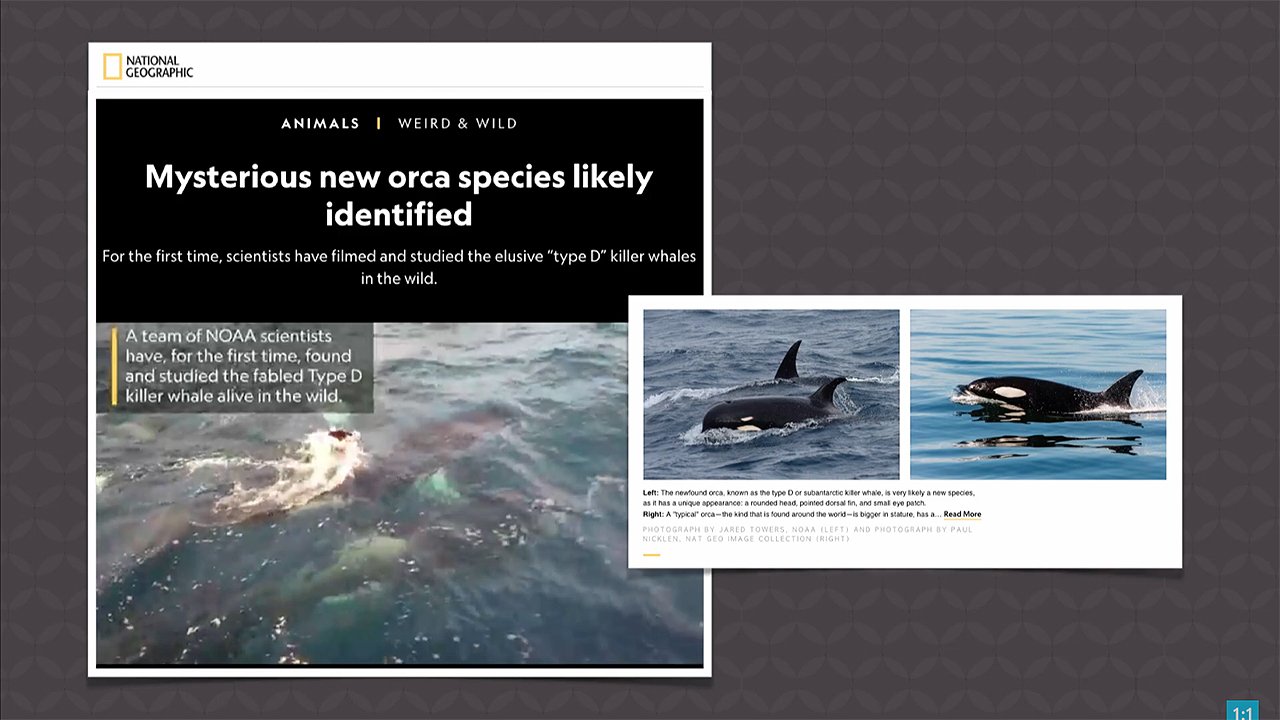 In 1955, more than a dozen strange-looking killer whales were stranded on a beach in New Zealand. Called “type D” killer whales, they were virtually unknown in the wild to science, except in a few photographs and fisherman stories, from that time on. But, as National Geographic reports, scientists have now observed a pod of these whales for the first time.

Scientists headed for the dangerous waters off the tip of South America where these whales reportedly patrol the seas. After waiting for a week, a pod of whales finally approached the anchored research vessel. Scientists were able to confirm that these whales look different from other killer whales. They have “a more rounded head, a pointier and narrower dorsal fin, and a very small white eye patch.” Scientists were also able to obtain a small sample of the whales’ skin and blubber.

One researcher, who collected photographs of these mysterious whales, commented on this research (emphasis added):

By collecting the first biopsy samples ever obtained on this form of killer whale, Pitman's expedition [promises to] increase our knowledge on genetics, evolution, feeding preferences, and resource partitioning in type Ds, and in killer whales as a whole.

This study tells us nothing about the supposed evolution of type D or any other killer whales.

This study tells us nothing about the supposed evolution of type D or any other killer whales. That would require showing how brand-new information was added to the genome to create a killer whale from an entirely different creature. Of course, that hasn’t been observed.

Killer whales are considered one species, but it’s quite possible they will soon be divided into a variety of species (including four near Antarctica alone), one of which would be this new population. Scientists often struggle with species designations, partly because they don’t have a proper understanding of kinds.

You see, in an evolutionary worldview, hybrids between species should be a rarity. But that’s not what we observe. Hybrids between species abound, but they’re always within the same created kind. (Usually the level of “Family” in our modern classification scheme.) When we start with what God’s Word teaches—that organisms are created to reproduce according to their kinds—the “species problem” makes sense because species is a manmade term to try and classify creatures, but organisms were originally created according to “kinds,” not species.

We continually see the species list increasing as variety within a kind is determined to be speciation. This variety highlights the incredible creativity of our Creator who ensured organisms could adapt and thrive in an ever-changing world.

This item was discussed on Answers News cohosts Dr. Georgia Purdom, Dr. Gabriela Haynes, and guest Dr. Tommy Mitchell, a medical doctor and speaker for Answers in Genesis. Answers News is our twice-weekly news program filmed live before a studio audience here at the Creation Museum and broadcast on my Facebook page and the Answers in Genesis Facebook page. We also covered the following topics:

Watch the entire episode of Answers News for March 21, 2019.