Has this tree really been alive since 8,000 years before Christ?

On a wild Tasmanian mountain there is a magnificent, recently discovered stand of Huon pine trees that has been called the world's 'oldest known living organism'. Newspaper reports have claimed that what looks like hundreds of trees densely covering one hectare (2.5 acres), is all part of the one tree, since all these 'trees' appear to have identical DNA. Over the years, it is believed, 'snow has forced its branches to the ground, where they have taken root'. (The Sydney Morning Herald, January 28, 1995, page 1.)

It is hard to see how a tree could be older than the time since the biblical Flood, so if its published age of 'more than 10,500 years old' were correct, then this would present a serious challenge to Old Testament chronology. In fact, some media reports claim the tree 'could be 30,000 or 40,000 years old'.v 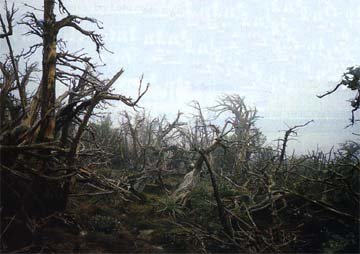 The media reported that scientists had definitly found the world's 'oldest living organism' in these Tasmanian Huon pines. A scientist working on the project said, 'we have made no such claim'.

So have these dates been obtained from drill-core sampling of the growth rings in the main trunk? Not surprisingly, the answer is 'no'. The source of the reported 'age' may be a 'guesstimate' based on core sampling a lake below the mountain which contains Huon pine pollen. This is clearly based on far more assumptions and uncertainties than tree-ring dating. Even the apparent absence of DNA differences is not 100 per cent certain, it seems, though probable.

It appears that traditional tree-ring dating on any timber found growing at the site so far gives an age of no more than 4,000 years. This is well within the ages of the oldest living bristlecone pines, which have around 4,600 tree-rings and are still the world's oldest living organisms. (Bristlecone pines are native to the Rocky Mountains of the United States.)

One of the scientists working on the project has issued a statement on electronic mail saying that they had only said it was plausible that these trees might turn out to be part of a much older tree that was now underground, but that this was definitely not a foregone conclusion. He said the media 'decided to run with the story that scientists working in Tasmania have definitely found the oldest living organism in the world. We have made no such claim'.

If there was a global Flood around 5,000 years ago, no living thing should be older than that. There are still some uncertainties with tree-ring dating, which is by no means absolute (for example, trees can form more than one ring per year). Nevertheless, it is worth noting that the maximum tree-ring ages for living trees fall just within this range. Apart from the biblical Flood, there seems no reason why, if certain trees are capable of living for 4,000 years, some should not have lasted much longer.